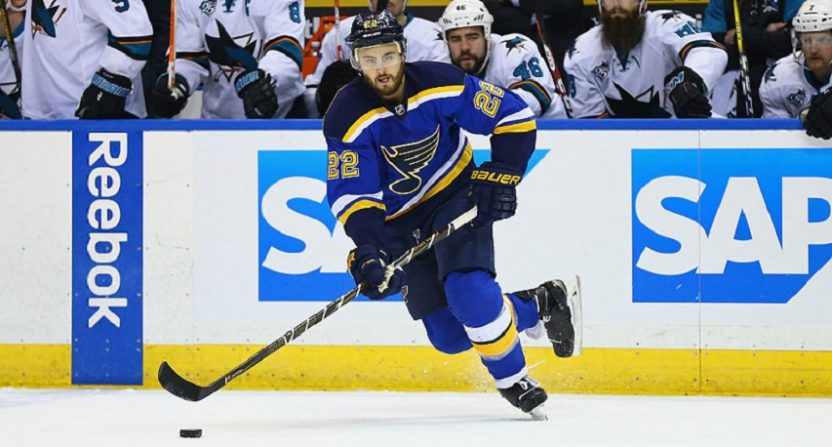 I have no idea if these players will be traded by the NHL trade deadline and, if they are traded, where they will go. I make jokes about Friends, The Young Pope, my baldness and the NHL. I don’t have sources. My sources are Nickelodeon and HBO. I’m just out here guessing.

But you don’t care. You want to read trade deadline speculation. Whether it’s informed or a guy in his boxer shorts on his couch pecking his keyboard during Seinfeld rerun commercial breaks, it doesn’t matter. I know the names of all the potential trade targets and teams in the NHL. I’m perfectly qualified to throw some stuff at the wall and then gloat when I get one right.

TSN has a list of the 10 best deadline targets and the people at TSN know stuff. This is where I will guess where those 10 players will be after the deadline passes on March 1.

In their most recent game, the Los Angeles Kings’ right wings behind Tyler Toffoli were Dustin Brown, Kyle Clifford and Trevor Lewis. They can use an upgrade. Vrbata is cheap. The Kings don’t have much cap room. They could use some scoring help. It makes so much sense that I can’t wait for it to not happen.

The Lightning are in a terrible spot. They might not make the playoffs but if they do, they could go deep. Boyle is a very valuable penalty killer and a big body meant for playoff hockey. The Lightning should hold on to him for the rest of the season.

If the Sabres trade him, it will have more to do with off-ice problems than on-ice ineffectiveness. He’s a 30-goal scorer on a bargain contract for one more year. He also has all of his 21 goals in his past 36 games. Trading Kane would be nuts.

Here’s my reasoning for retaining Boyle and trading Bishop: make Andrei Vasilevskiy the guy in Tampa the rest of the way. There’s not much difference between Bishop and Vasilevskiy this year. Bishop goes to Dallas, signs an extension to be the Stars’ new No. 1 goaltender. The Stars put Antti Niemi on waivers and send him to the AHL before buying him out next summer. Kari Lehtonen is traded in the summer. The Lightning get cap space to do something else now. This will never happen. I know.

The Senators need offense and help on the wings with Bobby Ryan out. Vanek is a defensive liability, but Guy Boucher’s system can help hide him. He doesn’t make a lot of money, so that makes him attractive to Ottawa. This definitely happens. Guaranteed.

The contract is too massive and the production is too low. Maybe something happens in the summer, but it’s hard to imagine anyone taking Landeskog now.

Marc Bergevin says he’s not going all-in this season, despite the quick hiring of Claude Julien. He also said he wouldn’t trade P.K. Subban or fire Michel Therrien, so here’s to believing he’s full of crap one more time and will improve his center depth in a deal that maybe involves getting the cap hit of David Desharnais off the books.

I don’t know. He played five seasons in Detroit for Mike Babcock. Nazem Kadri’s wings in the Leafs’ most recent game were Leo Komarov and Josh Leivo. The Leafs can do nothing, miss the playoffs and be fine. But this would be a nice, “hey, look, we did something to upgrade that didn’t cost much, so don’t say we didn’t try” move.

I’m of two minds — one is that the Avalanche are such a poorly run organization that they will hold Duchene despite this being an incredible sellers market, the other is the Islanders will throw so much stuff at Joe Sakic that he will have to pull the trigger in the next week. On the Islanders side of things, Duchene gives them a boost now, shows John Tavares the Islanders are in it to win it in the future and gives the Islanders insurance if Tavares flees for Toronto after the 2017-18 season. This is another deal that makes so much sense that no way it happens.

The Habs will be all-in! Heed my words! Just kidding. As stated at the top, my words are all guesswork. But the Habs need a defenseman who can skate. They have Shea Weber and Alexei Emelin paired, and they can’t skate. Jeff Petry and Andrei Markov are also paired, and they can skate. Adding Shattenkirk would give Julien two great options on the right side in terms of guys with skating ability and Shattenkirk would boost the Habs’ second power-play unit. The Stanley Cup is as up for grabs as it’s ever been. Go all in, Marc. The window is wide-open now for Montreal. Alex Radulov is gone after the season. Get the chips in the middle and go nuts.