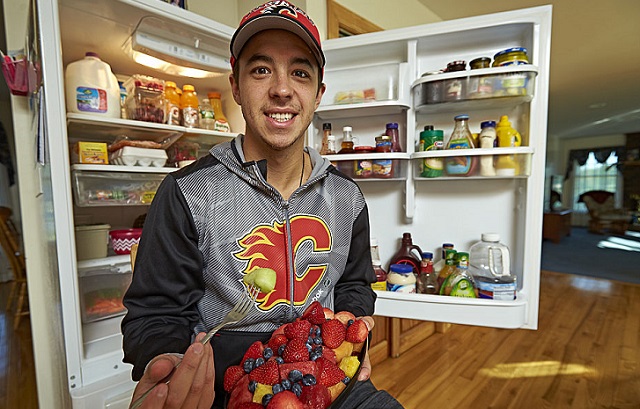 Welcome to Part 1 of The Comeback’s three-part NHL preview series. Over the next three weeks, I will tell you exactly how the standings will look at season’s end, starting with teams 30 to 21 today, 20-11 next Thursday and 10-1 (along with playoff and trophy picks) the Thursday after that. You also get to learn which episode of the television sitcom Friends best represents each team’s upcoming season.

While this is designed to be fun, it’s important that you take as much offense as possible to your team’s predicted finish. Thank you and enjoy.

Key losses: Fedor Tyutin, hope for the future as long as John Tortorella is there, Jared Bednar (coach of the AHL champion Lake Erie Monsters) left to coach the Colorado Avalanche.

If they were a Friends episode, they’d be: “The One With The Sharks.“ It’s arguably the worst episode in the show’s history, as it revolves around Monica thinking Chandler masturbates to sharks. Instead of assuming he changed the channel as he walked in and caught him, she wrestles with the idea that her husband m’bates to sea life. The way you can’t believe Monica’s lack of awareness, you can’t believe the Blue Jackets have Tortorella as their coach and extended their front office this summer.

Key losses: Antoine Vermette (although his bought-out contract remains), a bunch of other guys not worth listing.

If they were a Friends episode, they’d be: Any episode that involved flashbacks. Why? A flashback episode is nothing but empty filler during a season. You pop it on and you instantly know there’s nothing good or new here. That’s the Coyotes because they are mostly filler; with dead money and buyouts, the Coyotes are wasting about $21 million in cap space. Look out for a new episode next season when GM John Chayka gets caught in wacky hijinks with his new neighbors in Las Vegas.

If they were a Friends episode, they’d be: “The One Where Monica Bangs The High School Guy.” You see, that dude was technically of legal age (the actor playing him was like 27), yet despite a mutual attraction, Monica dumped him because he was so young despite having a lot of promise and she eventually started a serious relationship with someone much older. Anyway, the Oilers got rid of Hall for no good reason this summer and added Lucic.

If they were a Friends episode, they’d be: “The One Where Joey And Rachel Try To Do It But They Can’t.” The Leafs and their fans probably think they will see some fireworks this season. They’ve waited, been patient, and now they’ve got Matthews, but nothing happens. It’s just not right. Not yet.

If they were a Friends episode, they’d be: “The One Where Rachel Sleeps With Paolo After Ross Has Sex With The Copy Girl.” Rachel was in a bad way as her heart was broken. She needed to start fresh and focus on herself. Instead, she made a bad choice by bringing a hunky European into her life when it was the last thing she needed. Anyhoo, that Eriksson signing was the last thing Vancouver needed. Will Eriksson do some great things for the Canucks? Oh yeah, but he’s just not what the team needs now. (Note: Rachel-Paolo II was after Ross came home with Julie, not the break sex. I am leaving the incorrect information as a way to shame myself.)

If they were a Friends episode, they’d be: “The One Where Ross Puts That Guy To Sleep With His Speech.” The Devils are going to be, much like Rachel’s boss at Bloomingdale’s, a big dull dud. Hall will be fun but the back end is young and suspect, so they will probably have to play safe hockey and try to win 2-1 with Cory Schneider. They’re going in the right direction but this should be a snoozefest season in Newark.

If they were a Friends episode, they’d be: “The One Where Gandalf Doesn’t Show Up At The Last Second.” Remember how sad the gang is when this super cool guy bails on them? They are sad about it. They had plans to hang out. But after a while, they realized they were better off without him. They still weren’t great, as Joey, Chandler and Ross went to bed early, which is why the Avs are still super low on this list. But they will get better as they mature without Roy. I mean Gandalf.

If they were a Friends episode, they’d be: “The One Where Phoebe And Monica Date Those Russian Guys.” They’re not ever identified as Russian, but one’s name is Sergie and he needs a translator and eventually they go to the Russian Tea Room. Once the translator and Monica leave, Phoebe’s date goes off the rails. This is exactly what is happening with Datsyuk leaving, only there’s nothing in this episode that says Sergei doesn’t like gay people, so it’s not a perfect correlation.

If they were a Friends episode, they’d be: “The One Where Half The Group Is Mad Because They Don’t Have Money.” It revolves around Ross’ birthday and a Hootie And The Blowfish show. Joey, Phoebe and Rachel are all low on cash so they can’t compete with the other half of the group. Yeah, they can go to the restaurant, but they aren’t unable to get most of the great items on the menu.

If they were a Friends episode, they’d be: “The One Where No One’s Ready.” Ross is ready. Chandler and Joey are fighting over cushions. Phoebe has purses. Monica is checking Richard’s messages. Rachel is a pain in the ass. All the pieces are in place but Ross just can’t everyone on the same page. Eventually, he offers drink fat to make Rachel happy, something we learned in later seasons was impossible. What’s this have to do with the Flames? Ross (Brad Treliving) thinks he owns Rachel (Johnny Gaudreau) but she’s not taking his crap. I don’t know about the rest. Joey and Chandler are Mark Giordano and TJ Brodie? Monica checking messages is Brian Elliott waiting on a new contract? I don’t know, just go with it.