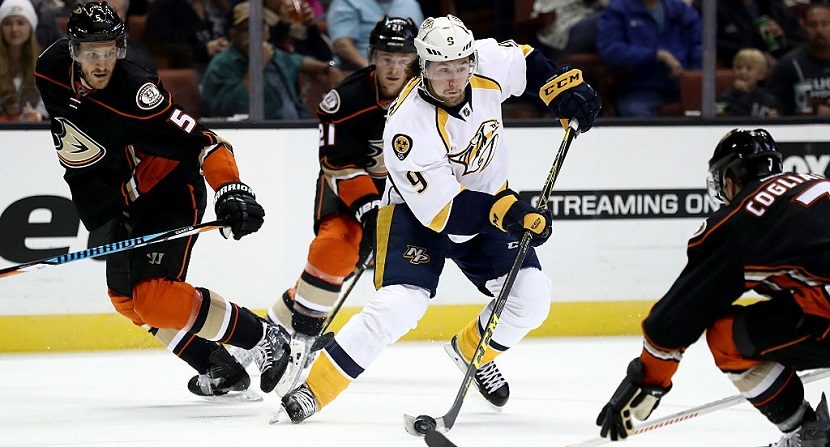 The NHL Conference Finals start Friday, which is usually a pretty exciting time for hockey fans. The Nashville Predators and Anaheim Ducks face off in the west, while in the east, the Pittsburgh Penguins and Ottawa Senators are matched up. This year may be no different for most, but I can’t quite get as pumped up as in past seasons.

Hockey is in an “in-between” period in terms of era-dominating teams. Much has been made of the demise of the Kings and Blackhawks out west, but the Sharks, Blues, Red Wings, Bruins, Rangers and, frankly, the Ducks are all worse off than they were three years ago. They’re all clearly on the downside of their respective runs. Meanwhile, teams like Calgary, Florida, and (holy hell) Colorado seemed to be emerging as contenders, but have stalled in that process. The Wild and Canadiens remain good, but not great. The Blue Jackets were good, but not as impressive as their record. Tampa Bay had a wildly unlucky season. The Leafs and Oilers weren’t ready quite yet.

This, along with other factors, leave us with the worst conference finals slate in recent memory. In the post-lockout era, it has no competition.

As far as regular-season point totals go, this year’s edition isn’t especially out of the ordinary. The Predators, Ducks, Penguins and Senators combined for 408 points, which is eighth among conference final quartets since 2006. But even the years that featured fewer total points at least had one or two elite teams.

Last year’s foursome combined for just 406 regular-season points, but Pittsburgh, Tampa Bay and San Jose all came on strong after bad starts to the season. 2014 featured meh teams in New York and Montreal, but also featured one of the great series of this decade in L.A. vs. Chicago. The 2012 playoffs were odd, but at least had the Kings making a dominant run. The 2010 matchup of Philadelphia and Montreal, who each had 88 points in the regular season, was one of the worst in league history. But the other side of the bracket had the Blackhawks and Sharks.

The matchups this year are odd to say the least. Let’s start with the most obvious one. Ottawa is not your typical conference finalist. They finished with 85 points last season and have won just one playoff series in the past decade. The Sens finished with just 98 points and a negative goal differential this year.

Erik Karlsson is the best defenseman in the league, the best of the decade and one of the best in league history. But the rest of the D corps is suspect. And the top-scoring forwards for the playoffs are Bobby Ryan, Derick Brassard, Mike Hoffman and Jean-Gabriel Pageau. Craig Anderson has a .914 save percentage. The team is sub-mediocre possession-wise. None of this screams “conference finalist.”

Usually when a team like this makes it this far into the Stanley Cup Playoffs, a major upset has occurred. But I can’t say that’s happened. They were somewhat lucky to avoid Pittsburgh and Washington, but even luckier that there were no other great teams in the East.

Meanwhile, Pittsburgh makes sense as a conference finalist at first glance. They were here last year and won the Cup. They have the best forward group in the league. No one would have been surprised two months ago. But then there’s the small matter of the blue line. Kris Letang has missed the entire postseason. Not only is he a Norris-caliber defenseman, he was propping up what was a pretty weak defensive group for a contender.

In his place, Brian Dumolin, Justin Schultz, Ron Hainsey, Olli Maata, Ian Cole and Trevor Daley have taken up the bulk of the defensive minutes. But this would be far and away the worst group to win a Stanley Cup. Since 2007, teams that have won it all have had Nicklas Lidstrom, Chris Pronger, Letang, Duncan Keith, Zdeno Chara or Drew Doughty. This year is bad enough for the Pens to break that trend.

Nashville is a team some picked to make a long run before the season started. The team isn’t bad or hobbled. But they were a 94-point, fourth-place team in the regular season. The top four on defense is the best in the league. And there are some really nice players on offense, notably Ryan Johansen and Filip Forsberg.

But the Preds are 8-2 in the postseason on the strength of the ridiculous .951 save percentage Pekka Rinne is putting up. It’s not uncommon for goalies to go on a tear in the playoffs and carry their team to another level. But Rinne isn’t Dominik Hasek or Patrick Roy or Henrik Lundqvist or even Marc-Andre Fleury. Rinne was middle of the pack during the regular season and has been below-average pretty routinely for the past half-decade. The Predators are good, but the team that finished the regular season 16th in points shouldn’t be the best one left in the playoffs at this point.

Anaheim is the hockey version of the Karl Malone and John Stockton Utah Jazz. As Bill Simmons has pointed out on multiple occasions, the Jazz of the late 80s and early 90s were a great team that was kept from the NBA Finals by even better Western Conference foes. They had the misfortune of sharing an era with the Showtime Lakers, Barkley Suns, Hakeem Rockets and Payton/Kemp Sonics. But when all of those teams fell off and none emerged, the Jazz made back-to-back finals in 1997 and 1998. They weren’t any better, they just outlasted the other franchises.

The Ducks won the Pacific Division for the fifth year in a row. The previous four postseasons, they were upset by Detroit, beat by Los Angeles, beaten by Chicago and beaten by Nashville. Anaheim is not better than it was in 2014 or 2015. But the Blackhawks and Kings are gone. They don’t have to worry about any emerging contender now that they have disposed of Edmonton. Ryan Getzlaf and Corey Perry have their best chance to win a Cup of their own after serving as role players on the 2007 squad.

I’m sure whatever happens over the next month or so will be enjoyable. I just don’t think I’ll be telling the grandkids about any of these teams.