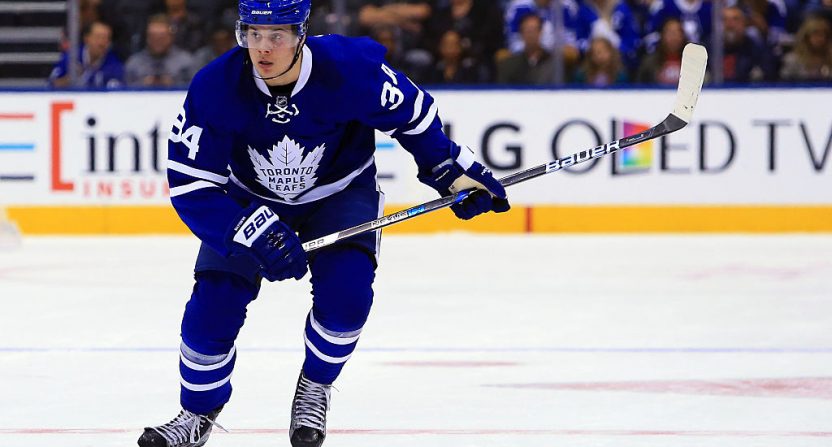 Welcome to Part 1 (of 1) of the 2017 NHL Trade Value Player Rankings, a column that I was inspired to write this week for some reason. Why do this now, when the Stanley Cup Playoffs are around the corner, and not at the beginning of the season? No one knows. It just seemed like the right time to rank players based on their trade value.

Nothing happened this week on Twitter that is making me do this. Nope. This is not about someone with the stature of, say, Bill Simmons being petty over nonsense. No, sir. No, ma’am. Just feel like doing it.

(Thanks as always to Jonah Keri, who began ranking all MLB players by trade value many years ago at Grantland but did not urge me to start an NHL Trade Value series. Special shoutout to FanGraphs’ Dave Cameron, who’s also been doing his own MLB rankings for the past several years.)

So how does this Trade Value Player Ranking thing work? Good question. Let me copy and pa- … I mean, explain.

I’m pretending every single NHL player became available for trade today. I’m factoring their age, ability and contract status while ignoring any sort of needs of a team. I’m ranking them in reverse order from least desirable to most desirable. The idea being the person that is ranked 50th on this … oh, I’m not doing that many … the player ranked 20th on this list would not be traded straight up for anyone ahead of him.

These are all my words. I invented them. This is all me.

These are three young guys at varying spots on their entry-level deals doing very well already. They are not unlike my three best friends — T-Fly, Condo and Balls — during a night of blackjack in Las Vegas. We were crushing it at a $10 limit table with Stan Bowman sitting at a table across from us. T-Fly was up a hundo, Condo was up $300 and Balls was dominating with $500. We had just arrived at the casino and they were all already winning.

Werenski, Nylander and Drouin are the T-Fly, Condo and Balls of the NHL right now. They’re getting dealt nothing but face cards and blackjacks despite not bringing as much money to the table as others.

It wasn’t that long ago when you could say Marchand wasn’t even the most valuable player on his line, but we’ve reached the point where we can safely say that Marchand is more valuable than Patrick Beverley.

I haven’t seen a Russian this dominant since Drago killed Apollo in Rocky IV.

The way the Lightning have kept it together with Steven Stamkos on the shelf for most of the past two seasons has me thinking. For one, Hedman’s leadership and tremendous play on the back end has been a massive part of it. He’s a big, strong, smooth-skating defender that can play big minutes against tough competition and contribute a lot of offense. Even with a new, huge contract, Hedman is this valuable.

A theory I just invented — The Stamkos Theory.

He can score from anywhere.

Remember that TV show that was called The OC? Burns is the “His father is the district attorney!” of defenseman. Powerful and memorable.

I can’t be the only one who has watched Marner’s first NHL season and constantly thought, “This is just like the plot of The Karate Kid.” He moves to a big city. He has to meet new people. The speed of the NHL level was his personal Billy Zabka, holding him to one goal in his first 10 games. Now Marner is doing well (may as well say he’s dating Elisabeth Shue) and now he’s about to enter the playoffs (The All-Valley Karate Tournament) to show he’s bested Zabka.

Everyone has to be thinking that.

This was the toughest part of this list. Every player is under 30, but making a lot of money. They play different positions. They have various impacts on their teams in various ways, but are all capable of delivering stomach punches to an opponent. It’s so hard to rank these four, but then I remembered something one of my good friends from college told me.

When it comes to greatness, my buddy Lewis Singh had all these models he’d use to diagnose the situation. Clutch factors. Big game measurements. Individual impact. I won’t go into detail here, because I don’t want this to be a 5,000-word piece about 20 players, but I leaned heavily on that for spots 11-8.

I named this system Levels Of Lew Singh.

Price is the only goaltender on this list, because it seems as though NHL teams always value their goaltender over any other goaltender. The Dallas Stars had one of the worst goaltending duos in modern times in 2015-16 and said, “No thanks, we’ll go with this again next season.”

But Price transcends this.

The best way to explain Price’s value on the open market is to compare him to great content. The best thing about making content in 2016 — if you have good content, people are going to find it no matter who you are and where you are.

Fact: People believe Erik Karlsson is a hockey star (even though he isn’t).

That’s all you need to know about the NHL right now. Everyone is complaining about the quality of this year’s season (probably the worst ever), this year’s playoff race (potentially the most ghastly in years) and a general lack of imagination by the general managers (it honestly feels like they gave up), but really, everything comes back to Erik Karlsson.

A case could be made that Karlsson simply had bad luck, a bad agent, or both. Switch him with Drew Doughty in The 2011-12 Los Angeles Kings and what happens? It’s the exact same team, only with Karlsson getting the subsequent career bump instead of Doughty. His best performance happened as part of an ensemble cast in 2015-16’s Ottawa Senators, a quality dramedy that tanked despite excellent reviews. His most successful season was 2011-12’s Ottawa Senators, a Jason Spezza vehicle from beginning to end (and the one that established him as the Nolan Ryan of Ottawa).

He’s never carried a quality team that succeeded unless you want to count the 2013 Ottawa Senators, which were well-received but made barely enough money to cover its budget because of the lockout.

That makes Karlsson someone like Alex Smith: He’s a No. 1 draft pick, he has all the tools, you can easily talk yourself into him being good … and then, six games into the season, you realize that you’re not making the Super Bowl with Alex Smith.

What if I told you the Sabres tanked a season only to get the most disappointing runner-up prize in sports history?

I’m Dave Lozo and here’s what I believe.

I also believe that billionaires should pay for their own fucking stadiums. I know that’s not an original sentiment today, that just about everyone has said this for years and it seems like I’m poaching it for use under my byline, but I believe it.

The brain injuries suffered by Crosby throughout his career are not unlike the movie Teen Wolf.

Remember when Brandon and Brenda Walsh arrived in Beverly Hills and changed everything forever? I remember watching that first episode with T-Fly and Balls and we knew nothing would ever be the same. That was what it was like watching Matthews debut and score four goals in the season opener. They may as well start referring to Air Canada Centre as The Peach Pit and Mike Babcock as Joe, because things will never be the same in Toronto.

A lot of people have said that McDavid reminds them of Tom Brady. My dad and I talk about this a lot. They just have that “it” quality you can’t quantify. They can take over a game at will. You want them in a big moment. You really need to clean your glasses and soak them in with your eyes, which reminds me of a story involving my grandfather just before he passed away.

He wore glasses from the time he was a little kid. So even on his deathbed, he would wear them so he could read the paper and watch the New England Patriots, Boston Red Sox, Boston Celtics, Boston Bruins, New England Revolution, Boston College football, Boston College basketball, BU hockey, Harvard hockey, Pawtucket Red Sox minor league baseball and every Mark Wahlberg, Ben Affleck, Casey Affleck and Matt Damon movie. I was 24 years old at the time and Brady had become Brady, and let me tell you — my grandfather saw that coming before anyone. He had the kid pegged as the all-time GOAT at Michigan.

And, of course, he wanted to remind me, even as he was dying, about how right he was. Nobody could read a situation better than him and he always said it was because his glasses allowed him to read things faster than anyone else from the time he was a kid. So there I am, sitting next to his bed, softly reciting the lyrics to “Shipping Up To Boston,” when he stopped me.

I got out of my chair and next to the bed.

I got as close as possible without getting into the bed with him. I could smell the Sam Adams coming through his pores.

He took off his glasses. He held them up, his frail arm trembling. He pointed at them.

I was in tears. I didn’t understand. “Those are your glasses, grandpa.”