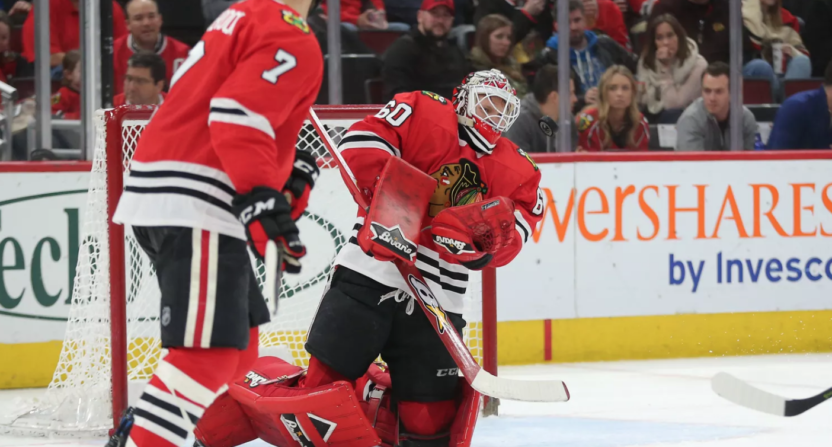 The 2017-18 Chicago Blackhawks might stink, but that didn’t prevent Scott Foster from having a night he’ll never forget.

Chicago was handcuffed in net when goalie Anton Forsberg went down with an injury before Thursday’s game against the Winnipeg Jets. Needing a warm body, the Blackhawks opted to sign the 36-year-old Foster, whose “pro” experience (if you can call it that) was a 21-game stint with Western Michigan University during the 2002-03 season and one game with the team in 2005.

The #Blackhawks have signed Scott Foster to an ATO today to serve in an emergency backup role.

Usually, when this happens, the emergency goalie sits in the stands and smiles at the surreal moment. For Foster, he was actually called into action.

In the third period against the Jets, Hawks goalie Collin Delia went down, meaning Foster got his moment to shine.

This guy was an NHL goalie.

He’s my brothers goalie for a beer league team in Chicago. It’s unbelievable.

Joel Quenneville with a bemused look on his face.

Collin Delia is out. Scott Foster, the emergency goalie who played at WMU 15 years ago, is coming in. Holy shit.

Scott Foster was listed as a press box attendee tonight. He went from there to playing for the Blackhawks. I guess you just never know what's going to happen in life.

Good news for the Blackhawks, emergency goalie Scott Foster, while at Western Michigan, was named the CCHA Rookie of the Week on Feb. 24, 2003 after a 59-save weekend at Bowling Green. https://t.co/HxvYfBvPZU

Scott Foster HAS NEVER PLAYED PRO HOCKEY. He’s playing for the Blackhawks right now. He made a save on Patrik Laine. What is this.

The crazy thing, Foster actually made some saves, despite his pants not matching the Hawks colors.

AND A SAVE BY FOSTER!

Foster finished the night with seven saves on seven shots, tying him for first in the NHL in save percentage (not counting qualifiers). In a perfect cap to the story, he was named the game’s first star for his breakout play.

Tonight's Three Stars of the Game:

Despite his performance, I can’t imagine Foster’s pro career will continue beyond Thursday’s game. However, with that said, who cares?

Scott Foster: "I’m an accountant by day. So a few hours ago I was sitting on my computer typing on the 10-key, and now I’m standing in front of you guys just finished 14 and a half minutes of NHL hockey."

Foster got his name called to play in the big leagues at 36 and actually performed at the highest level. How crazy is that? He can tell his family he’s an NHL goalie and a decent one to boot — even if it was for just one game.