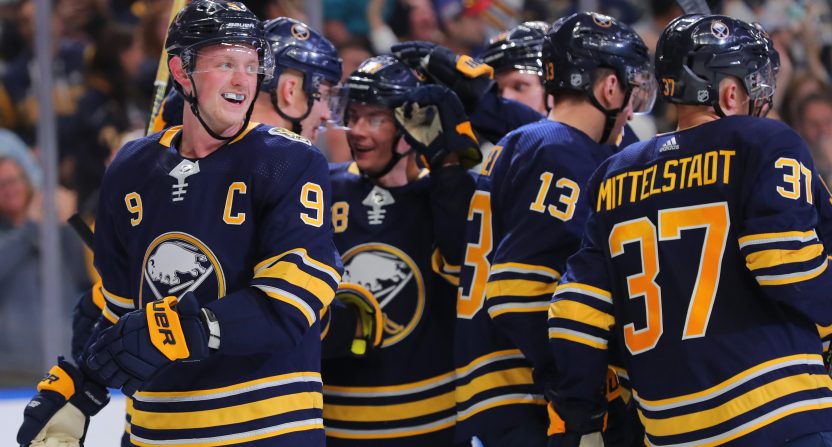 The NHL is entering the grueling heart of its 2019-20 season. Now that teams are crossing the 10-game mark on their schedule, it’s time to start evaluating and assessing some of the early stars and underachievers.

Let’s talk about the five biggest surprises found so far in the 2019-20 season.

The Buffalo Sabres failed to make the playoffs for the eighth consecutive season in 2018-19. They disappointed just as they have so often in the past decade. Just as we all expected, they’ve been one of the best teams in the league so far in 2019-20, with an 8-1-1 record through their first 10 games.

What’s driving the team’s hot start? Jack Eichel’s 14 points in 10 games is one key factor, but Carter Hutton has stolen the headlines and has been the backbone of the quick start. Hutton has been among the league leaders in most of the prime goaltending categories with his 6-1-0 record, 2.27 GAA, and .929 save percentage. He already has two shutouts this season, compared to the zero he posted in 50 games last season.

As with any hot start in a season, the usual disclaimers have to be asked. How long can the Sabres keep up this run of play? Will Hutton be able to post these kinds of numbers with an increased workload? Will the more negative statistics – winning just 47.9% of faceoffs and allowing the 12th-most shots – eventually derail the good times? We’ll have to wait and see. For now, Sabres fans should enjoy this period of renewed optimism.

It’s still October and John Carlson already has 21 points. That point total is crazy good for a forward at this time of the year and simply ridiculous for a defenseman. He has almost double the points of second place Ryan Ellis (12 points) and already has teammates championing his Norris Trophy candidacy.

Carlson’s start is almost unheard of from a defenseman. He’s on pace to easily surpass 100+ points this season, even if you factor in his production cooling some as the year progresses. Some defensemen would be thrilled to tally 20 points in a season, let alone have that total before Halloween.

Is there any question why his teammates are calling him John Norris?

The 2019 NHL playoffs saw some strong efforts from the Dallas Stars and the San Jose Sharks. The Stars took the Blues to the brink in seven games in the second round and the Sharks were knocked out by the Blues in the third round. While the Sharks rode a wave of fortunate plays and decisions (to say the least), the Stars were one bounce away from sending the Blues home early.

It was easy to pencil in both teams as future contenders for 2019-20. That hasn’t gone to plan quite yet. The Sharks are 4-5-1 to begin the year and the Stars are a more disappointing 4-7-1. Where are the Stars that nearly toppled the eventual Stanley Cup champion? Why does that team look like it’s starting from scratch after coming close to success in 2018-19?

The club is 8-2-1 through their first 11 games and have seen incredible performances from Connor McDavid and Leon Draisaitl. That high-flying offensive talent has been balanced with some steady goaltending from both Mike Smith and Mikko Koskinen. With defense and goaltending remaining a perennial issue, have the Oilers finally landed on the right formula to lift their ship?

Keep an eye on this team. The Oilers have some of the best offensive talent in the league and can be a genuine joy to watch.

What’s going on in New Jersey?

The New Jersey Devils were a common selection by analysts and experts as a team capable of ascending to the next level in 2019-20. The addition of P.K. Subban and Wayne Simmonds was supposed to round out a lineup that already features Taylor Hall. Unfortunately, poor defending and goaltending has derailed the headlines so far.

Mackenzie Blackwood (3.15 GAA, .886 save percentage) and Cory Schneider (4.09 GAA, .876 save percentage) haven’t been able to provide the stability necessary for a team like the Devils to climb the NHL’s standings. It’s the easy area to point to when discussing the team’s early struggles. But, there are some other worrisome factors to consider such as the Devils producing the 27th-fewest shots in the league.

As with any of these early surprises, there’s a lot of time left to sort things out. The Devils are only eight games into their schedule and have every opportunity to prove the preseason predictions were right on the money.