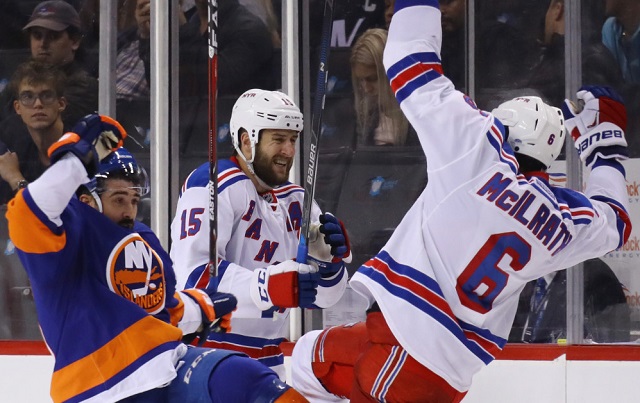 Some teams are likely to rise from previous depths during a hockey season. But as those clubs move up, others have to take a fall. We discussed which teams are trending upwards in a previous post.

Here, we’re taking a look at which NHL clubs will take a slide during the 2016-17 season. These five teams had better watch their backs this year. What goes up must come down.

The Red Wings were lucky to make the playoffs season with 93 points, yet the Boston Bruins missed out on the playoffs with the same number. That’s especially true when you see that Detroit had a -13 goal differential, while the Bruins were positive for that figure.

Losing the speedy, but aging Pavel Datsyuk gave the Wings an opportunity to retool. But they lost out on Steven Stamkos and instead went with aging stars such as Frans Nielsen, Steve Ott, and Thomas Vanek, whose offensive game looks to be in decline.

For the record, I like what the Rangers did this offseason. They didn’t go insane with bad free agent contracts, they signed Jimmy Vesey who has looked very good this preseason, and they concentrated on getting younger and faster. They also didn’t panic and trade Rick Nash for pennies on the dollar, and I think he could still be an asset for the Rangers.

With these moves, I think they’ll have a hard time reaching the 101 points they did last year, hence them being on the “fall” list. But I do think the Rangers still have a shot at one of the last playoff spots in the East if they put it all together. More importantly, they’ll be set up better for just beyond this season.

The Kings will always be the Kings as long as they have Jonathan Quick, Drew Doughty, and the like. But their 102 points from 2015-16 will be a tough act to follow without Milan Lucic (Oilers) and Marian Gaborik (foot injury/eight weeks) for the start of the season.

This isn’t to say they will be out of the playoffs completely, but the Kings have set such a high standard and they’ve played a lot of hockey in the last five seasons, and this might be the first significant tumble downward for this group since missing the playoffs two years ago, which was more of a blip on the screen than anything.

Similar story for the Anaheim Ducks, who went sky-high last season with 103 points, but once again took an early exit from the playoffs. Because of that, they replaced Bruce Boudreau with Randy Carlyle, who once won a Cup with the Ducks, but has since wandered the wilderness with the Toronto Maple Leafs.

Corey Perry is ready for a big season if this preseason goal for the #Ducks is any indication. pic.twitter.com/GbxJu6BC7c

Don’t expect the Ducks to fall out of the playoffs completely, as they’re still a very, very good team. But can Carlyle recreate the magic of last regular season while also duplicating what he did 10 seasons ago? You know what they say about sequels.

Put the Blues in the same category as the Rangers, who had to shed some salary to help their long-term situation with David Backes and Troy Brouwer, Brian Elliott and Ott moving elsewhere. So their fall from an incredible 107 points last season will be self-induced and totally expected.

The good news is that they still have enough pieces to make a run a the playoffs this season while setting themselves up for the future. They’ll have to depend on Jake Allen in his first season of being “the guy” in St. Louis.