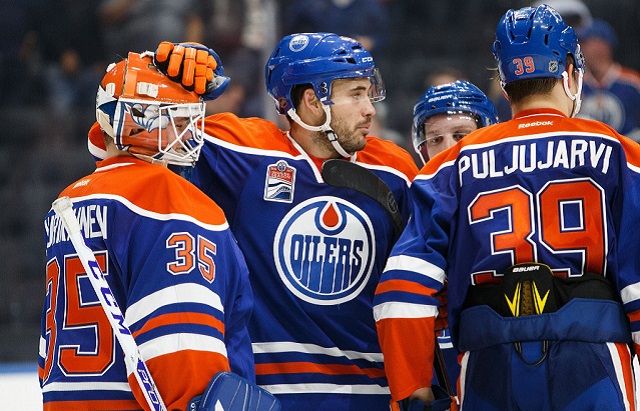 It’s always hard to predict turnover in the NHL, except to predict that there will be. Last year at Puck Drunk Love, I tried to guess five teams that finished out of the postseason in 2014-15 which would make the playoffs last season. There were exactly five teams that made the playoffs in 2015-16 after missing out the previous year. I nailed exactly two of the five.

Not a great percentage there, but for some reason, PDL and The Comeback are letting me do this again. So this time around, rather than make any playoff predictions, we’ll just say that these five teams will get better during the 2016-17 season.

Auston Matthews will get all the hype, but Patrik Laine is considered to be in the same ballpark and he’s joining a stronger foundation in Winnipeg.

The Jets’ issue will be goaltending, as they will look to some combination of Ondrej Pavelec, Michael Hutchinson, and Connor Hellebuyck to step up between the pipes. The three goaltenders have performed very well during a four-game preseason winning streak for Winnipeg, giving up one goal per game on average. If the goaltending holds up, this team could go back to the playoffs.

Carey Price’s injury was a tough one for Habs fans to take. They were 17-4-2 before Price went down. Since then, 21-34-4. It was a huge drop-off from Price’s .934 save percentage to Mike Condon and Ben Scrivens, who combined had a save percentage of .904. And if Price goes down for a bit this season, Al Montoya is an upgrade at the backup spot. But a full season of Price should easily get the Canadiens back into the playoffs. Their hope is that Shea Weber can give them a comparable season to the man for whom he was traded. Speaking of which…

Remember, we’re just predicting which teams will get better. And the Predators’ trade for P.K. Subban will make them better for a long time. Will it make them better this season? You might not think so in a division with Chicago, St. Louis, and Dallas. But Nashville has improved steadily under Peter Laviolette, advancing to the second round in his second season. Now with Subban, the sky is the limit. He’ll create a ton of havoc on the power play against Western Conference teams not used to seeing him seven times a season.

At some point, I’m going to be right on the Oilers. But hear me out: This team gained eight points from the previous season, and that’s without a full season from Connor McDavid. Their coaching situation is stabilized with Todd McLellan on the bench and once again, they lucked into a great draft pick as Jesse Puljujarvi fell to them at number four.

But don’t forget the acquisition of Milan Lucic, which not only provides a veteran presence who can still produce for them, but also hurts division rival Los Angeles. They may have lost Taylor Hall in a head-scratching trade, but overall, this team might have just enough to sneak into the playoffs for the first time since Raffi Torres was a young goal scorer who had never been suspended.

Jack Eichel’s 2nd season in the @NHL begins in 3 days.

Not to be outdone, Jack Eichel could join McDavid for the playoff party in Buffalo. He now has Kyle Okposo on his wing, and as long as Okposo’s freak accident where he took a slapshot to the knee turns out to be nothing, he will help Eichel get better. Dmitri Kulikov was acquired from Florida to strengthen the blue line. Can Robin Lehner stay healthy and be the goalie that the Sabres hoped they would get when they brought him in last year? If so, the team that made a 27 point jump from 2015 to 2016 will be ready to take the next step.