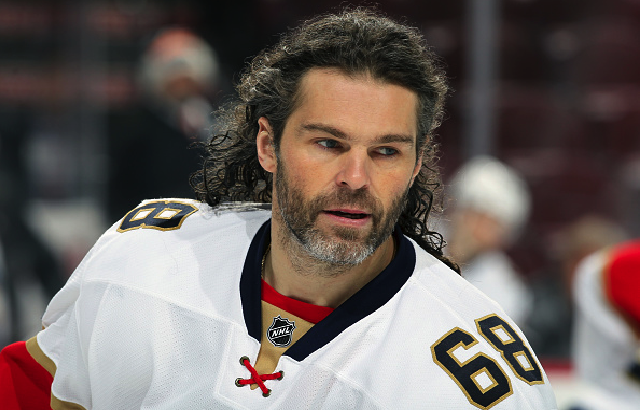 The theme of the 2016-17 NHL season so far has been clear: The young people are here to steal the jobs from the old people. It’s basically a “Millennials Are Ruining…” story come to life in a professional sports league.

Connor McDavid. Patrik Laine. Auston Matthews and the other young Toronto Maple Leafs. Zach Werenski. Jimmy Vesey. They are the manifestation of Ben Stiller’s character in Happy Gilmore that torments the people in the old folks home. Laine is going to steal Jaromir Jagr’s medicine and push him down a flight of stairs if he mouths off one more time.

I’m here to tell you that old people have a place in hockey. Sure, they’re forgetful and a little slower than the teens, but that doesn’t mean they’re not useful members of hockey society. Some of them can gather the young people around a campfire and tell wild stories of a league without a salary cap and scheduled lockouts, a story they won’t believe because it sounds all too fanciful.

But really, these olds are holding their own against some of these teens. Here are the five best olds in the NHL this season (with perhaps a sign or two they are getting old).

WHAT A SAVE BY ROBERTO LUONGO! WOW! ABSOLUTELY UNREAL! pic.twitter.com/zh6iLSk9lo

The good: On the inept Florida Panthers, Luongo has posted a .918 save percentage in 21 starts while fending off 28-year-old whipper snapper James Reimer, who has an .896 save percentage. Luongo ranks 13th in the NHL in save percentage among goaltenders to make at least 15 starts.

The bad: With the Panthers making a strong push toward the analytics movement, Luongo seems a little lost. He has been seen around the team’s facility carrying a calculator and saying loudly to no one in particular, “According to my calculations…” then adding things that make no sense, like, “According to my calculations, Sophia was mean to Rose on The Golden Girls.” He’s trying, at least.

First goal of the night?

The good: Much like Luongo and most of the population of Miami, Jagr is old and enjoying life in Florida. He’s well off his 66-point pace from a year ago, but 15 points in 30 games have him headed toward another 40-point season as a 40-year-old. He’s also tops on the team in raw Fenwick at 56.2 percent, so he’s showing he can still play at a high level.

The bad: The analytics are on Jagr’s side, so he doesn’t need to kiss the front office’s butt. However, he’s single and likes to party, so he’s very much the Trip McNeely who comes back to the high school party in Can’t Hardly Wait. But he’s still old, so he’s constantly trying to get everyone to leave the club at 10 p.m. so he can get home in time to watch Friends reruns.

The good: With 16 points in 31 games, he’s tied with punk kid Shayne Gostisbehere for the Flyers team lead in points by defensemen. He looked cooked last season, but was tracking toward a 40-point season on a red-hot team before suffering a two-week shoulder injury Sunday. Maybe playing six games with Team Europe got his old bones warmed up quicker for the regular season.

The bad: The only other European on the Flyers’ blue line is Radko Gudas, so when it comes time to hang out on the road, it’s either hang out with a bunch of kids that want to discuss the most recent episode of Vanderpump Rules or go somewhere and watch Gudas “accidentally” elbow people in the bar. Streit wishes he were dead one hour into either night.

The good: Markov has 21 points in 29 games, which puts him on pace for nearly 60 points, a number he hasn’t reached since 2008-09. It’s especially incredible, as his failing body limited him to 20 total games in 2010-11 and 2011-12. People are preparing the Norris Trophy for Shea Weber, who may be the second-best defenseman on his own team.

The bad: His phone bill. Markov doesn’t have unlimited texting and for years, he relied on P.K. Subban to keep him hip to the young people trends so he didn’t feel like an outsider. So all the international texts to Subban in Nashville asking him to explain memes, new emojis and Facebook Live have resulted in Markov having to move in with Alex Radulov, who will not. Stop. Talking. About his kids.

The bad: No, it’s not that he has to be around Patrick Kane eight months a year — it’s that at 37, Hossa’s mind seems to be going. It’s tragic, really. It happens to the best of us, but a recent quote showed things may be falling apart at a dangerous rate for Hossa. Check out what he said after he had a goal overturned because there was an offside spotted on review.

Hossa on the offside: #Blackhawks pic.twitter.com/IOmCFVrK8K

Hossa thinks offside, a rule that has always existed in hockey, is a new rule. He says it twice and no one corrects him. It’s important that the Blackhawks get him all the help he needs, because soon he will forget how icing works or how pucks can be legally placed in the net. He will pick up a puck, throw it into the net, have it waved off, then wonder about this new rule.