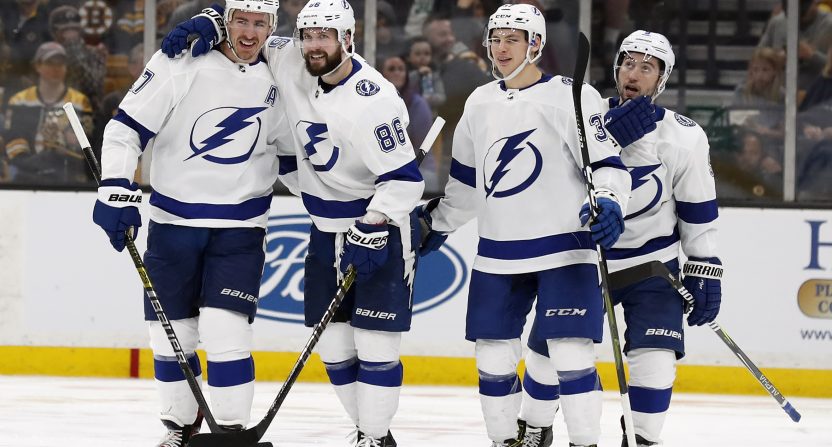 The dog days of summer are officially here. Now that the calendar has flipped to August and most of us are asking the sweltering heat to take a hike, it’s time to start talking about the upcoming NHL season.

The 2019-20 season will have a tough time living up to the craziness that was 2018-19. The St. Louis Blues accomplished what no other team has accomplished in sports history as they went worst-to-first to win their first Stanley Cup. But that doesn’t mean there won’t be some fun stories and questions to follow in the year ahead.

Here are five questions to keep an eye on as the NHL starts preparing for its new season.

Will the review changes be enough?

The NHL recently made some noteworthy changes to its review procedures following a postseason that was loaded with controversy. Coaches will have the ability to challenge missed stoppages in play (hand pass, puck out of bounds) that were missed by the officials. The officials will also be able to review major penalties (looking at you, Vegas-San Jose series), match penalties and double-minor penalties.

While most would agree that the changes are a healthy step in the right direction, are they enough to fix everything? Probably not. That’s not to say the NHL isn’t doing enough, but it does say that this is a complicated issue that can’t be solved in one summer. It would’ve been nice to see the league add some clarity to the frustrating offside reviews that can wipe out a goal if someone was offside by a hair when leaving the ice a minute before the goal happened, but that might be wishful thinking.

At least the NHL is trying to improve what’s clearly broken. Now it’s time to see if they’ve done enough.

Can the Lightning rebound?

The Tampa Bay Lightning were the Stanley Cup favorite by a huge margin heading into the 2019 playoffs. They walked through the competition and had a historic regular season that will remembered as one of the greatest the NHL has ever seen.

As we all know, things didn’t go according to plan and they quickly became the joke of the postseason. The Lightning’s lasting memory from 2018-19 will be a massive collapse, which is a shame given all of their regular season accomplishments.

The Lightning should once again be top contenders due to their stacked roster that can still be completely dominant every single night. There’s no reason on paper why the Lightning aren’t the clear favorite, surpassing even the most loaded rosters around the league.

Mentally, will the Lightning be able to put the nightmare from last season behind them? Can the returning group, which is the bulk of the talent on the roster, move past their nightmare? This might be a better question to ask ahead of the playoffs where the Lightning are almost a lock to enter again as favorites.

The stereotypical view has been that high-scoring games are the most exciting hockey games. That stance is a bit silly as defensive 1-0 battles can be far more thrilling than a 6-3 result, but it’s the one the NHL has moved towards. They’ve made that push through shrinking goaltender equipment and slight rule changes, which appear to have been successful. Those alterations, in addition to the increasing speed of the game, have boosted scoring in a big way.

Will the trend continue? Or will teams start making adjustments that force scoring trends back down?

Will teams start getting ready for Seattle?

The Vegas Golden Knights have thrived in their first couple seasons thanks to an expansion draft that made them immediately competitive. Many believe that NHL teams weren’t quite as prepared as they should have been, which partially allowed the Golden Knights to become an instant Stanley Cup threat.

So, will preparations change ahead of Seattle joining the NHL in 2021-22? Realistically, the contract restructuring that needs to happen before an expansion draft needed to begin well in advance of the 2019-20 season. That being said, teams will start getting their ducks in a row knowing that they’re closing in on an expansion draft in 2021. General managers should already have a list of players they want to protect that will be refined as 2019-20 progresses.

Keep an eye on any new contracts that are awarded as they may indicate what teams are planning to do ahead of the next expansion draft.

What’s next for the Blues?

The St. Louis Blues winning the Stanley Cup still feels pretty shocking. The magic had so many opportunities to run out, and yet the Blues kept pushing forward and won their first Cup.

Heading into 2019-20, oddsmakers aren’t sold on the Blues being capable of a repeat performance. Many outlets don’t even have the Blues in their top-5 list for early Cup favorites. That’s a bit disrespectful, but it might be a fair assessment given the Blues’ up-and-down season that relied on some unlikely heroes (Jordan Binnington) to get the job done.

It wouldn’t be surprising to see the Blues finish at the top of the pack or right in the middle. They’re a giant mystery. One thing that is certain is the fact Blues fans will be willing to give their team a pass after delivering the ultimate prize for the first time in franchise history.