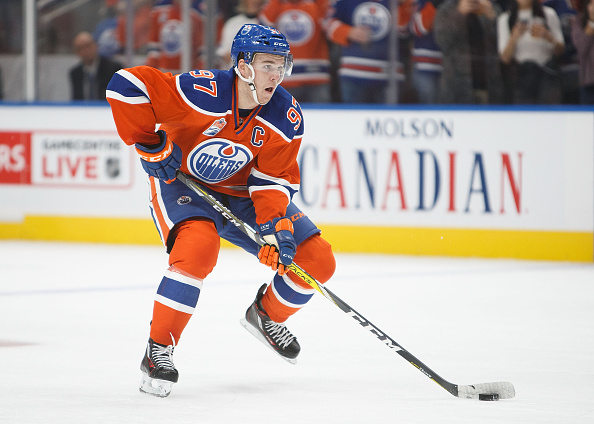 Don’t make judgments on teams and players too early in a new season. The big rule among hockey prognosticators and forecasters is that you shouldn’t decide on a season-long storyline from a small sample size of games.

Well, I’m ditching that mandate and making five claims about the rest of the 2016-17 NHL season based on the first week of play, or three games into the schedule.

Connor McDavid is the best player in the NHL

The Edmonton Oilers have become must-watch entertainment, despite fielding a poorly constructed roster solely for one reason: Connor McDavid.

It’s just three games into the season, but fans have been blessed with watching the uber-skilled McDavid get to work. In three games, he’s scored three goals and six points. He’s consistently been sensational each and every night and he’s not even close to his peak. There’s no other player with the same mix of vision, speed and pure determination as the 2015 No. 1 overall pick.

Defensemen tasked with the tall feat of guarding him on an odd-man rush are virtually defenseless when he has the puck.

Connor McJesus for the hart this year https://t.co/q3VcJSaH84

McDavid is the best player in hockey. No slight to Sidney Crosby, Patrick Kane, Erik Karlsson or anyone else, but the Oilers forward is unstoppable. Hopefully, unlike last season, fans are privy to a full season of McDavid in Edmonton.

The Toronto Maple Leafs will be fun, even when they inevitably start stinking again

Lost among the justifiable hype was the impressive play among fellow Leafs youngsters. Mitch Marner displayed an incredible gusto for puck possession, holding onto the puck on perfect zone entries.

William Nylander, Zach Hyman, Nikita Zaitsev, and Connor Brown have all had their moments early in the season. I’m not convinced Toronto is ready to make the next step towards the playoffs, but god damn, are they fun to watch. This Maple Leafs will be really good, really soon — even if 2016-17 isn’t their year. At least the season is not a total bust. The future is here, it just needs to percolate a little bit. Watching hockey in Toronto is entertaining, once again.

The Anaheim Ducks made the wrong decision hiring Randy Carlyle

The Ducks have started the season with three straight losses and with good reason: Randy Carlyle’s bad habits.

Anaheim is supposed to be a win-now team, so when top coach Bruce Boudreau was canned, a stable, proven coach was expected to step in and guide the Ducks to postseason prominence. General manager Bob Murray instead chose to delve into the past, hiring Carlyle. The 60-year-old led the Ducks to a Stanley Cup nearly a decade ago, but since then hasn’t been able to get positive returns from his teams. His tenure in Toronto was a disaster, so he was an odd choice to helm the Ducks.

Three games isn’t a lot to judge, but Carlyle’s old-school mentality is failing. Here’s an excellent breakdown of why the Ducks struggle with his approach.

Dumping pucks in and failing to establish zone entries is problematic for a team featuring a bevy of skilled players. The Ducks were so bad at establishing an offensive presence in Sunday’s overtime loss against New York, they didn’t register a shot attempt (not a shot, an attempt) until nearly 15 minutes into the first period — an unacceptable and concerning statistic. Carlyle’s old habit of completely wasting his fourth line didn’t help matters.

The Ducks have been without talented youngster RFA holdouts Hampus Lindholm and Richard Rakell (recently signed), but their presence alone isn’t what’s impeding Anaheim’s success. Carlyle is playing checkers in a chess competition. It’s evidently clear he’s not the man to lead Anaheim back to the promised land. Will the Ducks be awful? No. But they won’t be nearly as good as they should be.

Hurricanes management is among the smartest in the NHL. Shrewd waiver claims (Andrej Nestrasil [2014], Martin Frk) and trades (Teuvo Teravainen) have loaded the team with four strong lines. Carolina’s defense is young and improving, and head coach Bill Peters might be the game’s most underrated bench boss. Constant smart decisions make it baffling Cam Ward and Eddie Lack are still between the pipes in the South.

Ward hasn’t been above replacement level in more than half a decade. The 32-year-old hasn’t posted a save percentage (all situations) above .910 in five straight seasons. Inexplicably, Carolina opted to hand their long-tenured starter a two-year extension. Behind him is Lack — a once-promising goalie with impressive physical attributes who, for whatever reason, hasn’t worked out with the Hurricanes. Lack was even worse than Ward (who was awful) last season with a .901 save percentage.

Carolina has scored seven goals in two games and has yet to record a win. Instead, they’ve allowed nine (blowing three-goal leads in both games). An upgrade between the pipes is desperately needed and unless the Hurricanes opt for an improvement, their playoff chances slip considerably.

One thing that’s gone right this season is hockey has been fun. Fans get to watch the likes of McDavid, Matthews, Patrick Laine and a handful of other talented youngsters, while still enjoying the talents of Karlsson, Vladimir Tarasenko, Tyler Seguin and other talented veterans. The NHL landscape is chock full of talented players.

More importantly, players are celebrating with pure jubilation. How freaking great was it to see Subban free to celebrate away from Montreal?

How about Mitch Marner losing his mind scoring his first goal?

Mitch Marner is an NHL goal-scorer.

And boy can he ever celebrate. pic.twitter.com/yKuvLCrPX6

The NHL needs to do the opposite of the NFL and embrace fun. The players around the league provide plenty of opportunities for that right now.