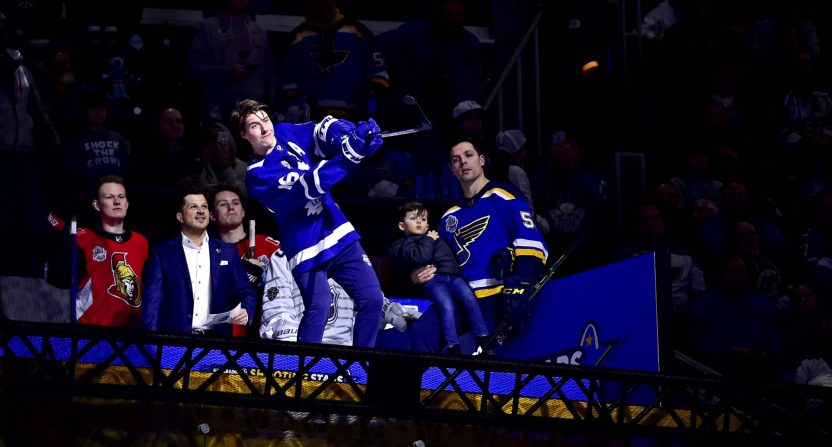 Did you watch the 2020 NHL Skills Competition on Friday night? If so, you saw some of the league’s new ideas on how to improve the exhibition, including 3-on-3 women’s hockey and a Top Golf style game to go along with some familiar contests. For the most part, we enjoyed the event and thought it was more entertaining compared to previous years, but we’re here to talk about where the NHL can go to improve things moving forward.

For starters, we applaud the NHL for trying something different. Some may argue that the more classic skills competitions, such as the most accurate passer, should still be used over something more gimmicky like the Shooting Stars challenge, which asked players to shoot pucks from the crowd into targets on the ice. Others may argue that it’s nice to see the NHL evolving and trying to give more casual fans a reason to tune in. We stand beside the latter point. Though we would’ve watched anyway, our curiosity was piqued by the new event and the women’s 3-on-3 game.

Unfortunately, as is the case with most new ideas, there were some awkward and poor moments during the Skills Competition. We like the direction the NHL is going, but we’d hope they consider the following points on what to do next.

This was arguably the highlight of the night. It was a ton of fun watching the U.S. and Canada battle it out in a format that rewarded a quick pace of play. It was also nice showcasing just how talented these players are, which is something that often goes overlooked.

Now, there was some unpleasantness by those who felt the women’s portion shouldn’t have been included as it doesn’t fit under the NHL umbrella. But, and we think this is a key point to remember, the NHL Skills Competition is mostly a giant marketing tool. So too is the All-Star Game. They’re marketing tools for both the NHL and the sport of hockey. Simple math says that the more hockey fans you have, the more people you may have interested in the NHL. It was a brilliant decision to bring in the women’s portion from a marketing perspective (it got a ton of buzz and it gave representation for female hockey players) and it ended up being a lot of fun to watch. Win-win.

One nitpick. The graphics tracking the players was pretty annoying and made it difficult to see what was going on. There has to be a way to showcase the players without blocking the overall view of the ice. We imagine items like this one, and even some of the rules for the exhibition itself can be tweaked a bit to tighten up what was already a very fun idea.

We loved the 3-on-3 game and we hope the NHL keeps it around for future events. It was refreshing to see some actual competition in an exhibition that’s normally lacking any kind of actual intensity.

This is a new event and it was going to have its issues. And boy were there a lot of issues. For starters, the decision to make the most attractive target, the 10-point target that looked like the St. Louis Arch, work in a way where players would have no idea if they hit it was craziness. Why design a target where pucks can go in above and behind the netting, confusing everyone who was watching?

Speaking of targets, why were so many designed in a way where it’s nearly impossible to see if they were hit? It seems ironic that the event that didn’t need a digital board, the accuracy event (more on this later), used one where this event could have really benefited from some added technology in the targets.

On the note of technology, wouldn’t the broadcast have been way easier to follow if the NHL brought back the glowing puck for this event? It seems like a no-brainer. The league has the technology to turn their broadcast into a video game, so why not deploy some of that here where it was pretty difficult to see what was going on outside of the slow-mo replays. In person, we can only imagine how hard this was to follow depending on your seat location. The orange pucks may have helped some (though they appeared to be orange primarily due to the Gatorade sponsorship), but maybe an actual glowing puck (not just digital effects) would have made things easier.

Improve the targets, improve the technology and you’ve got a pretty fun event on your hands.

No one is expecting any kind of serious competition during an All-Star weekend. Player safety is paramount. However, it would be fun to see an event where the players compete a bit more directly. Something where instead of it being a one at a time format, the players could compete at the same time. Most ideas surrounding this principle are admittedly clunky, but there’s one that might work.

Consider when Tyler Seguin and Jamie Benn competed in an accuracy contest in this Dude Perfect video. The part we’re discussing is at the 3:39 mark.

That seems like the perfect way for players to go head-to-head without any risk of injury or confusion. We’d love to see some showdowns between the league’s top talent.

This idea could be an improvement over the current accuracy event that, as we’ll cover below, was a disaster.

Ditch the digital board in the accuracy event

Technology is great when it’s used to enhance and improve on an idea. That memo was completely ignored during the accuracy shooting event as the league rolled out a digital board instead of the standard breakable targets.

There were problems almost immediately. The glass broke, the targets didn’t register when they should have and even registered successful shots when the player clearly missed.

Interesting idea but let’s abandon it and go back to what works. There’s something particularly satisfying watching a target explode when the puck connects. Here the pucks are bouncing back to the shooter and no one really knows how accurate things are due to unreliable technology.

There are obvious opportunities to save on some time.  The most obvious is the time between events that are filled with talking and interviews. We know it’s also used to prepare for the next competition, but we think there has to be a better way in terms of preparation that could make the switch from one event to the next a bit quicker. You could also scale back the team’s alumni involvement (and yours truly is a Blues fan), though it is fun to see some of the greats joining the fun.

The NHL needs to evaluate the Skills Competition as a whole to find a way to trim the overall running time down.