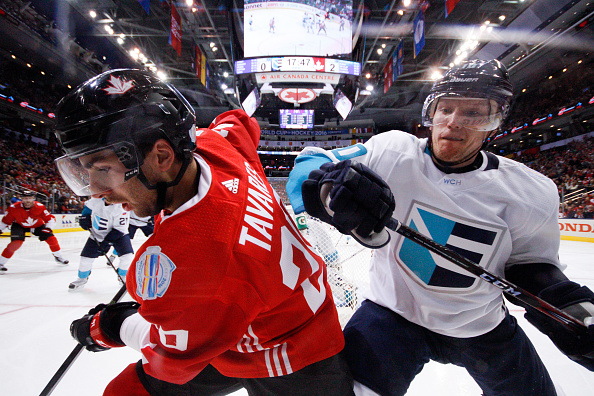 The 2016 World Cup of Hockey has wrapped up and Team Canada has skated away with an extremely awkward trophy. Now that the tournament is over, it’s time to start discussing what can be improved for future iterations.

There were some great stories from the renewed World Cup (that’s you, Team North America) and some stories which didn’t go over too well (attendance issues, ESPN’s broadcast, Team USA’s collapse). More on both the good and the bad in our best/worst column. Problems aside, the NHL has committed a huge amount of money into the World Cup in the hopes of owning a marquee international moneymaker, which means the tournament won’t be going away anytime soon.

Here are five ways the NHL can improve on the World Cup of Hockey for its next installment.

Force the broadcast to step its game up

ESPN returned to hockey with its coverage of the 2016 World Cup of Hockey. Their return wasn’t graceful as the CGI ads along the boards and disastrous commentary were the biggest talking points among hockey fans. The ads were distracting (which means they were a huge success in the eyes of marketing professionals) and often were confusing as they only appeared on a couple of the camera angles during the broadcast.

As the camera shifted angles, suddenly the players were in front of a Tim Hortons ad instead of a Gatorade ad. That’s a problem as viewers grow accustomed to setting their bearings to the area surrounding the action and that’s difficult to do when things are constantly changing.

As for the commentary… yikes. It wasn’t all bad, but the bad was particularly bad.

Watching the ESPN hockey broadcast is like watching with people who only know the stereotypes of hockey.

What is with all these baseball analogies during #WCH2016 tonight? This is why @ESPN shouldn't broadcast hockey.

"The boy band plays One Direction hockey" is… not even the worst thing I've heard from the ESPN broadcast, so.

Dont know whats bugging me more in this hockey game, ESPN broadcast, US playing like its a throwaway game in Rochester, or digital board ads

ESPN calling that tip in a "fluke goal" is one of the many many reasons we don't care if they broadcast hockey.

The NHL will struggle to sell the World Cup as a marquee event if the broadcast sounds like amateur hour. If you’re going to let ESPN have the rights, make sure they treat the event with the respect that the league believes it deserves.

If you watched the World Cup, you probably saw some footage from Ref Cam. If you haven’t, check out the videos below.

The Ref Cam provided a unique, intimate and fascinating angle hockey fans usually can’t see. Hockey fans ate it up with a spoon. The Ref Cam shows the true speed and finesse of a game which can be hectic and disorienting from the traditional broadcast angle.

The NHL needs to build on this success and keep innovating, rolling out new ideas and gadgets to enhance each tournament. Some may bomb and some may success, but fans will tune in if they know they will see something different.

Scheduling will always be a difficult area to improve when you have a preseason tournament. The window for the entire event to take place is extremely narrow, as players still need time to return to their clubs in time for the regular season. That being said, holding afternoon weekday games for a tournament which will take several iterations before it gets off the ground is a bit ambitious. If Toronto, the city which is believed to be the ideal location for such a tournament, can’t support these afternoon affairs, no plausible host city can.

All of the games need to be at night and they need to be in close geographic proximity.

The NHL has said that its goal is to have more countries represented at the tournament and that the hybrid teams such as Team North America aren’t expected to be permanent fixtures. As players such as Connor McDavid express their interest to play for their country rather than for Team North America, it sounds like the idea’s days are numbered.

Instead of ditching the thought of Team North America, the NHL should try their best to keep the youngsters around in one form or another.

The Final should be a Final

The current format of the World Cup of Hockey has the two final teams compete in a best-of-three series to decide the ultimate winner. That’s just weird. The NHL attempted a hybrid format which supposedly combines the allure of a best-of-seven series with the intensity of an international tournament where each knockout stage is decided with one game. It doesn’t work. Instead of all the hype and build up focusing on one game, it forces fans barely showing interest in the tournament to follow along through multiple “Final” games.

That’s not to say this idea won’t work in the future. But this time, Toronto didn’t even support Game 1 of the Final.

Lot of empty seats/boxes at World Cup of Hockey final. Not a great look. pic.twitter.com/l8YuNRQdw2

Make the Final match other tournaments. One game to decide it all. There’s really no season a tournament which doesn’t even last a month should require a best-of-three to decide things. Can you imagine the actual World Cup (we’re talking soccer now) attempting this?

In short, the 2016 World Cup of Hockey provided a lot of feedback and taught some important lessons to the NHL. How the NHL reacts to that feedback will determine this event’s long-term success.

Honorable Mention: Get a better trophy

The NHL revamped their trophy for the World Cup, but it still looks like a vase mixed with some kind of punch bowl. Compared to the Stanley Cup, which is arguably the best trophy in all of sports, this… thing… doesn’t exactly impress, nor does it sell the prestige the NHL is hoping to bring to the tournament. The trophy is supposed to be similar to the original World Cup trophy, but considering how bad that thing was, maybe it’s time to start fresh.