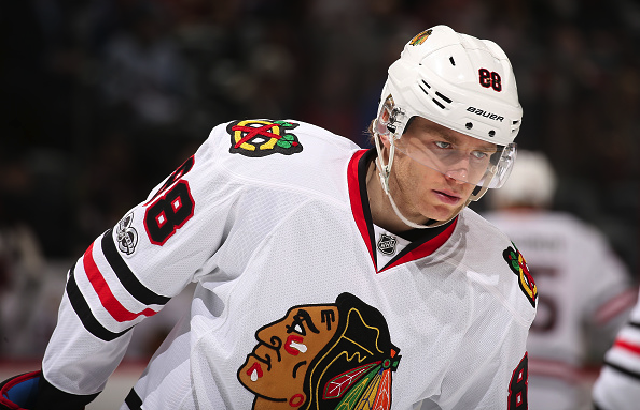 How much of a presence should current NHL stars have on the league’s 100 Greatest Players list?

The NHL will release its 100 Greatest NHL Players list Jan. 27 during All-Star Weekend in Los Angeles. They already announced the names of 33 players on the list from old-timey hockey, and you know it’s old-timey because the group includes names like Red, Elmer, King, Toe and Turk.

According to Elliotte Friedman of Sportsnet, there are only six current players on the top-100 list. Here’s what he says:

“Five seem obvious: Sidney Crosby, Jaromir Jagr, Patrick Kane, Alexander Ovechkin, Jonathan Toews. So, who’s your sixth? Evgeni Malkin? Carey Price? Duncan Keith? (I do know one voter who picked him.) Jagr doesn’t have to play in the game, so I wondered if maybe it was Joe Thornton, given the same consideration because he’s 37. We’ll find out in a little over two weeks.”

First thing first: Six is way too low for a list like this. Even if you throw away the argument that you could send any fourth-liner today back to 1945 and he would seem like he had X-Men strength and speed, it makes no sense that there would only be six current guys on this list.

Second thing second: I don’t think the five “obvious” choices are all the obvious choices.

In an effort to get out in front of the anger of fans when their favorite players of today aren’t on the list, I’m going to tell you the six current players that should not be on the top-100 list. Consider the yelling you will do after reading this practice for when you harass the official NHL Twitter account that Sunday night.

This has nothing to do with anything involving Kane’s off-ice life. Strictly looking at his career on the ice, he can’t be considered among the 100 greatest players in NHL history.

At least, not yet.

In his first nine seasons, Kane has been in the conversation as the best player in the league once — when he won the MVP last year. His next highest finishes in Hart voting were seventh in 2009-10 and sixth for the lockout-shortened 2013 season. He’s finished in the top-10 in league scoring in just three of his nine completed seasons, although should be there again this season.

That’s sort of the point — at 28, Kane could be on his way to top-100 status the next time the NHL chooses to do this. Then again, maybe he falls off a cliff when he turns 31 or becomes a different player when he’s traded to Las Vegas before the 2018-19 season. But to say Kane’s career to this point warrants a top-100 spot over, say, Jarome Iginla, is premature.

He has cracked 70 points once in his career. His two best finishes in Hart voting are ninth in 2013-14 and 10th in 2014-15. Really, the conversation about Toews being top 100 should’ve been over once we cited that 70 points thing, but if Friedman is saying Toews as an “obvious” choice, the NHL’s “blue ribbon panel” probably has him on the list.

Toews is almost like a backup quarterback in football; you hear more about what he could do if he wanted than what he actually does. “Toews could score 90 points a season if he wanted, but he chooses to play great defense for the team.” If being a leader really mattered as much as people wanted, Mark Messier would be ranked ahead of Wayne Gretzky on lists like these.

The reason Toews and Kane are favorites to get on this list? Championships. But for my money, the player not mentioned in the obvious choices by Friedman that has meant more to the Blackhawks’ three Cups is Duncan Keith, who seems like he won’t be on the top 100 list. Keith has just as many Conn Smythes as Kane and Toews along with two Norris trophies. Keith has been top-nine in Norris voting four other times. Where is his love?

OK, one more Blackhawk. The point with Hossa is that he’s the player people think Toews is. Hossa is lauded as one of the best two-way forwards in NHL history, but he’s managed to score at least 30 goals eight times and eclipsed 40 goals three times. It’s almost as if Hossa scores too much to win the Selkes that Toews gets.

And even with all that, with his 1,100-plus points, three Stanley Cups and five All-Star nods, Hossa isn’t top-100 material.

The Blackhawks sorta-dynasty is the result of deep teams, not one or two superstars carrying most of the freight (like in Pittsburgh). The championships are team awards, but it seems as though people feel that those three Cups mean multiple players from those teams need to be on the list.

Yet Keith, the guy who anchored a four-man defensive unit for the final two rounds in 2015 and has more individual awards than Kane, Toews (Selkes not included) and Hossa combined isn’t getting his due. Go figure.

The argument against Price being anointed a top-100 player is similar to the one against Kane: Too soon.

Did you know Price has been a Vezina finalist once in nine seasons? People have been expecting Price to be Price since he was taken with the fifth pick in 2005, but Price really hasn’t been Price until the past four seasons (last year’s injury-riddled nightmare not withstanding). If he gets on this list now, it’s more about reputation and projecting the remainder of his career to look like the past three healthy seasons than what he’s done so far, which is surprisingly little based on how highly he’s regarded.

Then again, Price turns 30 in August and has a checkered injury past. He could either go down as a Hall of Famer or a sad story of bad injury luck derailing a Hall of Fame career.

I see the case. I want to believe in the case. They’re on the borderline. They’re both going to top 1,000 points in their careers doing magical things that perhaps only people who shared a womb can do, but they’re just not up to snuff when it comes to the top 100 all-time.

For all the greatness, they’re not even close to point-per-game players — Henrik is 0.82 and Daniel is 0.81. Henrik has one Hart and a scoring title; Daniel has a scoring title, but had his Hart stolen by Corey Perry in 2011. Henrik Zetterberg, who won’t sniff the top 100 list, has averaged 0.90 points per game over a similar career and also has a Conn Smythe and Stanley Cup.

You may read this and then read a top-100 list in the form of an e-book expected to be out Monday that’s written by this author and has the Sedins on the list and think, “Wait a second… didn’t this same guy say the Sedins weren’t top 100 in something I read at The Comeback?”

Sometimes when you’re part of a group project, you get overruled by the other two guys and write the summary because they’re busy and you want to help out. That’s just being a good teammate, although distancing yourself from that choice a few days in advance says otherwise.

You’re just going to have to rationalize that for yourself when the time comes.