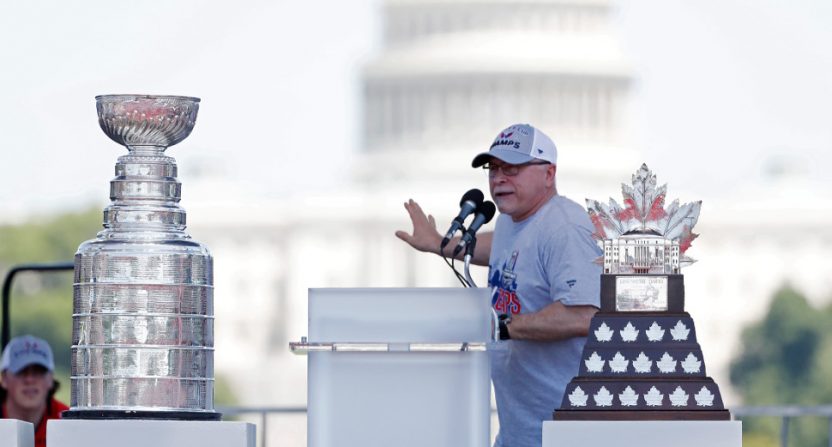 The Washington Capitals won the first Stanley Cup in franchise history earlier this month and have been celebrating since, but when they start their title defense this fall, it will be without the man behind the bench. Head coach Barry Trotz resigned Monday to seek other employment. As Isabelle Khurshudyan writes at The Washington Post, this is the first time a Stanley Cup-winning coach has left after the season since Scotty Bowman retired in 2002, the first time a coach in that situation has left for another team since Mike Keenan in 1994, and only the fifth time a Cup-winning coach has left in the last 40 years.

Khurshudyan adds that Trotz (the NHL’s fifth-winningest coach all time, with a 762-568-60-134 regular-season mark across his tenures with Nashville and Washington, plus a 36-27 playoff mark) was only paid an estimated $1.5 million annually under his current deal. That deal was in its final season of four, and Khurshudyan’s piece also mentions Trotz was almost fired at a couple of points during the year. He did have his salary rise to over $2 million thanks to incentives from Washington’s playoff success, and he did have a two-year extension with a modest pay raise triggered by a Cup win. However, Caps general manager Brian MacLellan told Khurshudyan that Trotz was looking for a contract more comparable to the league’s highest-paid and longest-term coaches and the team didn’t want to commit to him for that long:

“His representative wants to take advantage of Barry’s experience and Stanley Cup win and was trying to negotiate a deal that compensates him as one of the better coaches in the league — a top-four or five coach — so he’s looking for that type of contract,” MacLellan said Monday.

MacLellan said he was hopeful the two could agree on a “shorter-term deal,” but he said that a five-year term was a “sticking point” because that would have kept Trotz with the team for nine seasons and “there are not many coaches who have that lasting ability,” MacLellan said.

After Trotz won the Stanley Cup earlier this month, he expressed interest in returning and MacLellan said that if Trotz wanted to be back, he would be back. Ultimately, the financial differences led to his resignation. MacLellan said Trotz “does, probably, in some people’s minds” deserve to be paid in the neighborhood of those other Stanley Cup-winning coaches, but he added that doesn’t think “all teams pay that type of money and years. Certain teams are open to it, and the rest of the league isn’t.”

Just what are those other levels of compensation? Well, Montreal Canadiens’ head coach Claude Julien signed a contract extension estimated as five years and $25 million U.S. last year (so $5 million per), and Trotz was reportedly looking for something similar. Toronto Maple Leafs’ head coach Mike Babcock reportedly makes $6.25 million annually on an eight-year deal signed in 2015, while the Chicago Blackhawks’ Joel Quenneville signed a three-year, $18-million extension ($6 million annually) in 2016.

It doesn’t seem particularly unreasonable for Trotz to want to be paid at or near that level, as his one Cup is now the same as Babcock’s (Babcock has a 645-380-19-152 regular-season record, though, better by winning percentage) and Julien’s (who has a 583-379-10-131 regular season mark, relatively similar to Trotz’s). And although he’s behind Quenneville (three Cups and a 884-526-77-134 regular season mark), most people are. It’s also notable that Trotz’s past contract was signed at a much lower point for coaching contracts, well before these recent deals (which were prompted by plenty of interest from multiple teams) inflated things. And it seems likely someone will pay him close to what he’s looking for; the New York Islanders are the main team with a coaching vacancy right now, as many others have already made their moves, but it’s also possible that another team could look to fire their incumbent and sign a perceived upgrade in Trotz. Coming off a Cup win, his stock is very hot. So it makes sense that he’d want to make these move and sign a big-money, long-term deal.

Letting Trotz go is a little more unusual by the Capitals, but there’s also perhaps some logic to it. MacLellan’s comments about the term are perhaps particularly insightful. If this was just Washington not wanting to pay Trotz at a level similar to other top coaches, there would be a case that they’re being cheap. But it’s notable that Trotz had already been there for four years, and signing him to a five-year deal would have either set him up for a long run of continuity or made it quite expensive to fire him. There’s a long-running theory in the modern NHL that players eventually tune coaches out; maybe that is or isn’t the case (it certainly didn’t seem to be as widely considered the case for much of the league’s history, when many coaches were with the same team for a long time), but it’s understandable that the Capitals might not want to be locked into having the same voice behind the bench for nine years in a row.

And it’s worth keeping in mind that while Trotz was obviously a great fit for the current Capitals, that doesn’t mean he’ll necessarily be the best fit for whatever this team looks like in five years. Teams change, and what they need out of their coach changes as well. Moreover, the endowment effect leads to many teams overvaluing what they already have (especially when the market puts a premium on players or coaches with a recent title), and that has led to plenty of ill-conceived extensions for players and coaches after winning a trophy; at the very least, the Capitals have avoided that here.

Will this work out for Washington in the long run? A lot there may depend on who they bring in as a replacement. Trotz has been one of the NHL’s best coaches, and he was able to finally get this long-suffering team over the hump, so he certainly won’t be easy to replace. But there’s also perhaps some logic to avoid signing him to a five-year deal, and if whoever they do find as a replacement doesn’t work out, they may be able to make another change more easily than if they’d kept Trotz. It makes total sense for Trotz to seek some long-term security and cash in on his now-higher value (and the now-improved coaching market), but it also makes some sense for the Capitals to not just sign Trotz to the deal he was looking for. Maybe this parting of the ways will work out for both sides in the end.