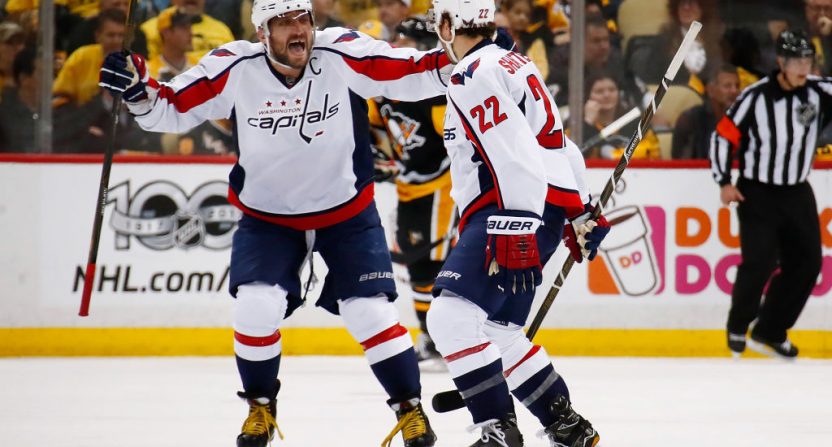 After coming up short against the Pittsburgh Penguins in Game 4 of their second-round matchup in the Stanley Cup Playoff on Wednesday night, the Washington Capitals are once again in familiar territory. That would be having a wildly successful regular season, only to leave fans disappointed with an early playoff exit. As the face of the franchise and team captain, Alex Ovechkin quickly becomes the easy target for criticism, and this year he is accepting the blame and taking responsibility.

In the Caps’ 3-2 loss to the Penguins last night, Ovechkin came up small with just two shots on goal and two trips to the penalty box.

“I didn’t play my game tonight. Me personally, I have to play much better,” Ovechkin said after the game, which puts the Capitals on the brink of playoff elimination. “I didn’t control the puck well. I make stupid decisions. Unfortunately, it happened.”

Not even Capitals head coach Barry Trotz would come to the defense of Ovechkin in this one.

“Our top players didn’t play as well as they needed to,” the coach said to reporters after the game.

Trotz made sure to not single out Ovechkin with his comments, but it is becoming more and more impossible to just give Ovechkin a pass in the postseason.

A year ago, some hockey writers came to the defense of Ovechkin under similar circumstances. The Capitals won the President’s Trophy for the best regular season record, and were ousted by the Penguins in the Conference Semifinals. The Capitals have not gotten by the second round in close to two decades, but Ovechkin has been above average in the postseason if you go off the stat sheet. The problem is Ovechkin’s production has not translated to team success when it matters. Just look at this stat from last year’s matchup with the Penguins.

In 2015, Ovechkin was labeled by USA Today as the most underachieving MVP in NHL history. With another second-round exit on the brink, that reputation is becoming more and more difficult to escape. And if the Penguins finish the job and send the Capitals home for the summer, we will likely read the same headlines just as we have for so many years now.

Are we noticing a pattern here? The seasons may change, but the narrative remains the same. Ovechkin is a heck of a hockey player, but when it comes to not advancing in the postseason, Ovechkin gets defended for one reason or another.

Not everybody has been quick to defend Ovechkin over the years. In 2011, following a disappointing series loss to the Tampa Bay Lightning, Scott Burnside of ESPN had this to say about Ovechkin;

Ovechkin had 10 points this postseason and continued to be a physical presence, and looked dangerous at times in Game 4. Boudreau said he thought Ovechkin was the team’s best player. Yet, this playoff failure will merely reinforce the theory that he is, simply put, not a winner.

Harsh? Maybe. And we understand it takes players time to grow into roles. Steve Yzerman, the rookie GM in Tampa Bay who has done such a brilliant job in reconstructing the Lightning, faced the same kind of criticism early in his career with the Detroit Red Wings.

After the Caps had taken a 2-0 series lead against Pittsburgh in the second round in 2009, we wrote how we were witnessing the shift of power in the conference, that the Caps had overtaken Sidney Crosby and the Penguins. Oops. Not quite.

That was six years ago, yet here we are now and the same story seems to be playing out once again.

The truth is that he cannot win a Stanley Cup alone, a notion Ovechkin expressed in 2013 following a 5-0 loss in Game 7 against the New York Rangers in the first round of the playoffs;

When a similar question was put to Ovechkin on Tuesday — does he harbor doubts about achieving significant success in the playoffs? — he returned to a theme he repeated often.

He went on to acknowledge he made mistakes, but quickly noted that others did, too, and concluded: “One guy can’t win the championship.”

No, one man can’t win the championship. But not every man is considered one of the best players in his sport to never win the Cup, never mind play for one.