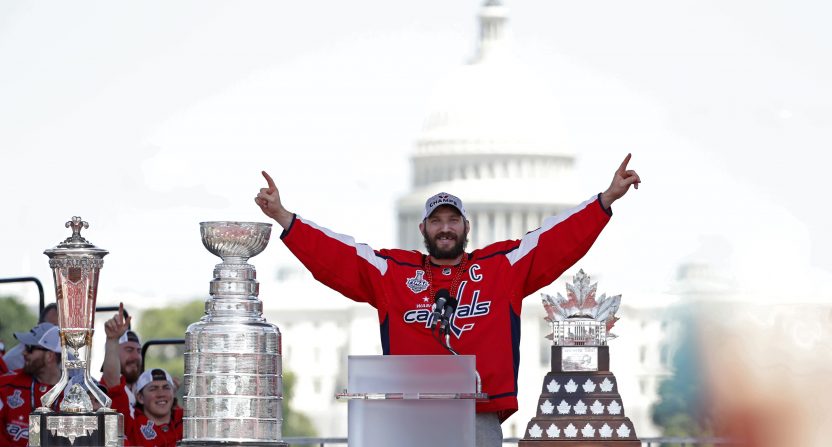 Before you even ask, yes, Alex Ovechkin is still celebrating his Stanley Cup victory. In fact, he brought an insane amount of Washington Capitals merchandise with him back to Russia to give out. Though the fun is still raging on, questions have already been asked about his future.

Ovechkin’s statement in a Russian NHL.com article created more questions than answers about what he plans to do next. Keep in mind that this is a Google Translation, so it may not be the most reliable of translations.

“To finish a career it is necessary, where it began. I think so. Therefore, in 2021, when the contract with Washington ends, I will consider all options.”

That’s a pretty interesting comment that’s ripe for discussion until we have some big free agency signings or trades to talk about.

Ovechkin is under contract through the 2020-21 season with the Capitals. After that, he’ll be free to explore his options at the age of 35. By the sound of it, Ovechkin wants to go back to where it all began, but what does he mean? He has spent all 13 of his NHL seasons with the Caps, suggesting that his comment would involve him going back to Russia.

“The main goal, why I bring the Stanley Cup to Moscow – I want to show it to the guys of the hockey school, where I came from. This is very important for children and for me.”

Though a lot can change between now and 2021, Ovechkin appears to be planning a return to Russia to finish out his professional hockey career. Specifically, Ovechkin returning to skate for Dynamo Moscow of the KHL seems like a real possibility. The two sides have remained close long after Ovie’s playing days with the club ended.

Have you ever drunk champagne with Ovechkin from the Cup? I did. Although it's a cup Dynamo Moscow presented to him to celebrate his long awaited ring pic.twitter.com/Q1Ij7dBglu

Now that Ovechkin has finally hoisted the Cup, he sounds content with his career. Even the idea of trying to chase down Gretzky’s goal record – a tall task, admittedly – doesn’t appear to interest him. The same kind of fire and passion normally found in Ovie is notably absent when talking about scoring records or even playing as long as Jaromir Jagr.

Ovechkin on Gretzky’s record in goals: I don’t think it’s possible to beat that record. You have to play till you’re 60. Jagr tried but couldn’t. Hockey isn’t the same. Everything is much more difficult now. To beat the record I have to score 50 each year. It’s hard #ALLCAPS

Ovechkin’s slowing goal pace doesn’t lend much optimism to the idea of chasing down Gretzky, but it also sounds like he’s finally happy with his career and plans to see things out.

Of course, with Ovechkin keeping his options open, some other NHL team may make an offer he can’t refuse and change this entire story.