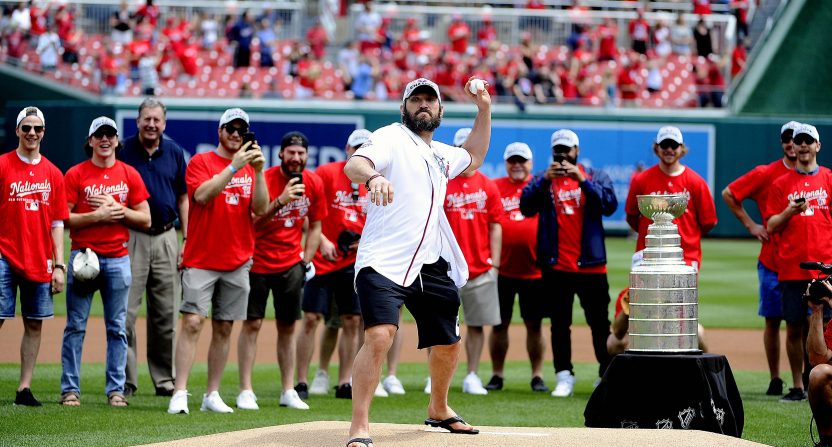 The Washington Capitals brought the Stanley Cup to Nats Park for the Washington Nationals’ game against the San Francisco Giants on Saturday, and it was quite a scene.

Things began with Conn Smythe Trophy winner Alex Ovechkin walking out with the Stanley Cup and throwing out the first pitch. Well, first pitches. The initial first pitch went to the backstop, so he got a second try.

During the game, Ovechkin was in a suite with his teammates and kept holding up the Stanley Cup for the rest of the stadium to see.

Alex Ovechkin is just holding the Stanley Cup up in the middle of the inning. They won’t put him on the Jumbotron because the ball is still in play lmfao #ALLCAPS #StanleyCup pic.twitter.com/XRRuUUWrOP

And then this amazing interview, which included Ovechkin and his drunk teammates singing “We are the Champions.”

This is the best interview of 2018.@masnKolko asks Ovi what it's like to be in front of this many D.C. sports fans after winning the Stanley Cup.

He and his teammates start singing "We Are The Champions." pic.twitter.com/udAJuOVIZQ

Life has never been better for Ovi and the Caps.