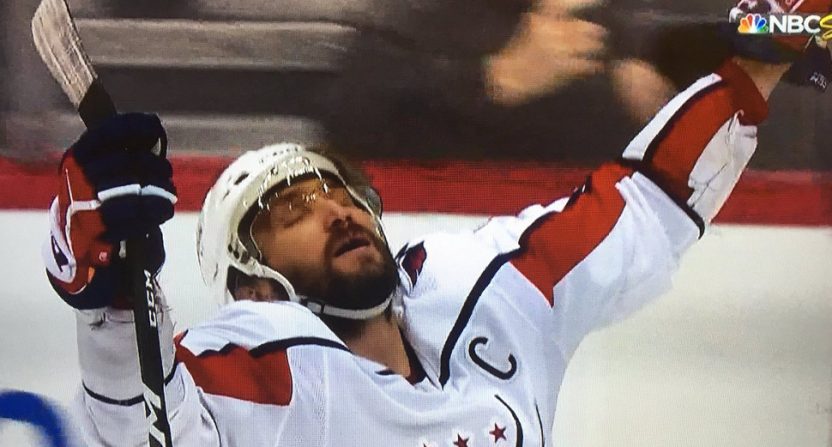 The Washington Capitals made history on a number of fronts with a 2-1 road overtime victory against the two-time defending Stanley Cup champion Pittsburgh Penguins in Game Six of that series Monday. They became the first D.C. NFL, NBA, MLB or NHL team to advance to a conference final since they did it themselves in 1998, they won their first playoff series against Pittsburgh since 1994 (and only their second in 11 postseason clashes between the teams), and they also gave us one of the year’s best postgame interviews. Capitals’ captain Alex Ovechkin, who’s been on the losing end of three postseason series against the Penguins (including ones in the past two years), sprung Evgeny Kuznetsov for a breakaway that resulted in the game-winning goal, and when NBC’s Pierre McGuire asked Ovechkin what was going through his mind as Kuznetsov broke in alone, Ovechkin had an extremely honest (albeit NSFW) answer:

That appears to be a clip from NBC Sports Washington, and it wasn’t shown on NBCSN (which went to the in-progress Predators-Jets game almost immediately, and later replayed just an interview with Kuznetzov. But there does appear to be pretty good proof this was carried live on NBC Sports Washington:

At any rate, Kuznetzov did just that, pulling off a great deke and sneaking a shot through Matt Murray’s five-hole:

And that made some incredible history for the Capitals. First, it broke the DC curse:

Still a long way from a Stanley Cup…

BUT THE DC SPORTS CURSE IS OVER! #ALLCaps pic.twitter.com/FUnT0On5N4

And it marked their first conference final since 1998, an era when they were backstopped by Olie The Goalie and covered by Rachel Nichols:

And check that game story byline, fans of @Rachel__Nichols! https://t.co/Qcug8bdtRh

With all that weight of history on them, plus the numerous close calls for both sides in this one, it’s hard to blame Ovechkin for what he was thinking. And while those who despise profanity may not love that he shared the uncensored version of his thoughts with McGuire, for the rest of us, it’s great to see that kind of raw honesty.

Oh, and Evgeny Kutznetsov dropped an F-bomb when talking to the media postgame as well:

"Nathan Walker, he played unbelievable, played like a little mother fucker. That's the only one word I have for him." – Evgeny Kutznetsov, Washington Capitals, after Game 6 pic.twitter.com/cJHxvwM48d

[Records and Radio on Twitter; photo from Dan Steinberg]