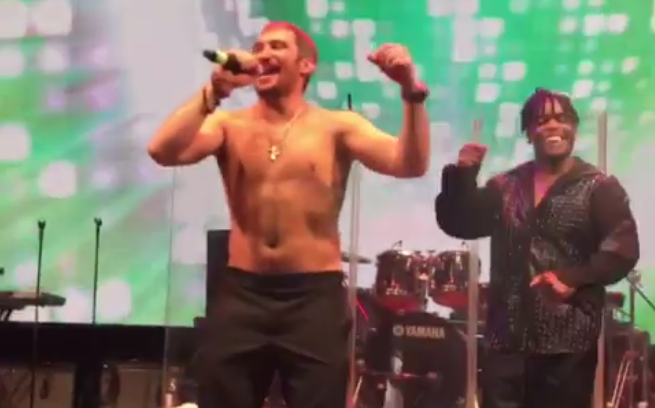 Alex Ovechkin knows how to throw a good party. The Washington Capitals forward married Anastasia Shubskaya last year, but he threw a memorable reception this weekend in Moscow which featured shirtless dancing, the song “Rasputin” by Boney M, some Russian ballet dancers and one enormous cake.

Let’s start with the highlight – Ovechkin ditching his shirt and dancing to some Boney M. Based on the various Instagram posts which have surfaced, Ovechkin started out the evening fairly calm, but by the end of the night his shirt came off and the rest can be seen in the video below.

The photo above from Yana Rudkovskaya (she’s married to Russian figure skater Evgeni Plushenko) says that Ovechkin is a “talented athlete who’s talented at everything.” That talent extends to singing while shirtless, evidently.

If you’re unfamiliar with the song, “Rasputin” was an international hit in 1978. The song by Boney M tells the tale of Grigori Rasputin, a Russian man who was a healer and who allegedly survived being poisoned and shot. There are countless rumors and fables about Rasputin, many of which are detailed in the song. The song calls Rasputin “Russia’s greatest love machine” which sounds like a fitting line to have at Ovechkin’s wedding.

There was some more formal dancing – with Ovechkin fully dressed – earlier in the night.

Ovechkin also enjoyed one of the biggest cakes we’ve ever seen.

It looks like Ovechkin and his family and friends had one hell of a night.