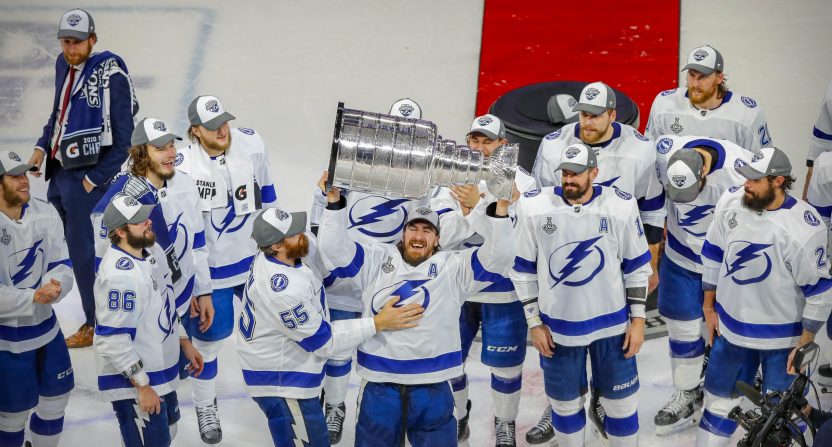 It’s not often hockey fans can come together in agreement over the same topic. It’s rare and honestly a strange feeling for that topic to be universal praise for the NHL. Such is the case now as the 2020 Stanley Cup Final has officially wrapped and the league’s achievement in successfully hosting the tournament deserves to be commended.

The NHL’s bubble tournament was one that was met with some criticism and skepticism when it was first introduced. How would the format work? Is it unfair to have teams outside of the playoff picture given a chance to compete? Can players jump right back into things? How would the lack of crowds impact games? Can the league keep everyone safe?

Well, we have our answers.

Let’s start with the monumental task that was keeping COVID-19 out of the tournament. The NHL succeeded with flying colors. Their Phase 4 testing didn’t yield a single positive result. A total of 33,174 tests were conducted without a positive. That’s remarkable and a testament to the NHL’s plan.

Testing took place across both bubble cities of Edmonton and Toronto. The host cities deserve just as much credit for keeping everyone safe during these strange times. The players certainly sacrificed a lot to isolate themselves from their homes, families and friends, but let’s not overlook the crews who made all of this possible.

Those crews involved the media relations teams who hosted all the interviews.

And the folks who did a spectacular job turning empty arenas into something far more entertaining. Large screens and some fun gags helped soften the fact players were competing in isolation.

A HUGE SHOUTOUT to all the fans for their support during the NHL Return to Play. 😂😂#StanleyCup pic.twitter.com/knyAFkX4JT

There were so many opportunities for this to go wrong. The modern NHL doesn’t have the best record for rising above difficult situations. Can you tell we’re still bitter about the league’s lockouts? And yet, here we are, watching the Tampa Bay Lightning celebrate a deserved Stanley Cup win in a relatively flawless tournament.

By comparison, the NHL tends to lag behinds its major sports counterparts. They’re usually trying to play catch up rather than striking their own path and leading by example. Here, the NHL led by example and, along with the NBA, demonstrated how professional sports are possible even in the most trying of times. Take a look at Major League Baseball’s struggles to see how badly this all could have gone.

Let’s hope the NHL builds upon this positive experience. Things went about as good as they possibly could have gone. The notoriously fickle NHL fanbase seemed pleased with the experience despite its quirks. It’s almost like the polar opposite of the NHL Guardians disaster that we simply love to bring up.

Building upon this success and coming up with a plan that both maintains the integrity of the season without causing too many issues is the next hurdle to climb. Now that the NHL has thrived with its bubble tournament, maybe we should all give them the benefit of the doubt for what lies ahead.