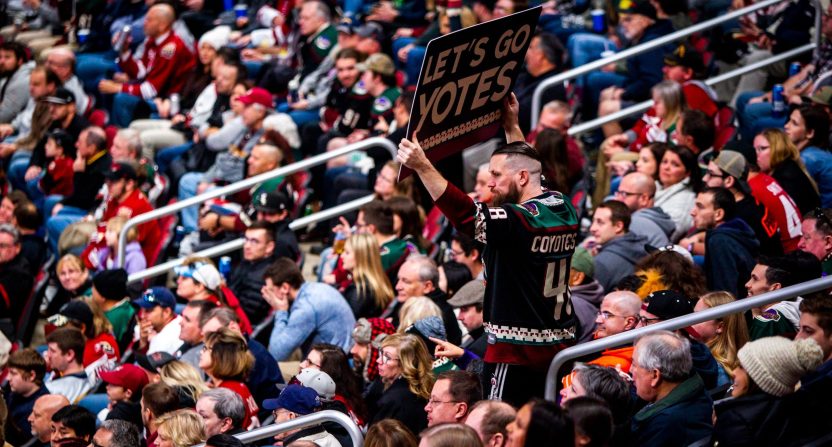 The Arizona Coyotes have been locked in a bitter battle with Gila River Arena in Glendale, Arizona for years and things culminated in December when the arena threatened to lock the NFL franchise out of the building over unpaid bills. This came, however, after plans had already been in place for the Coyotes to find a new home following the 2021-2022 NHL season.

The franchise’s hope is that they’ll be able to put a deal in place for a new arena in Tempe, Arizona soon. However, there’s no way that could be built in time for next season, so the NHL team has had to look to alternative ideas for the foreseeable future, especially since they have to be out of Gila River Arena by June 30.

According to NHL insider Craig Morgan, the Coyotes are hoping that Arizona State University will be able to do them a solid and let them use their new multi-purpose arena for “the next-3-4 years.”

“Per sources, the Coyotes are negotiating on a three-year deal with an option for a fourth year if construction of the permanent arena takes longer than hoped,” wrote Morgan. “ASU’s new arena will only seat 5,000 spectators so the venue is significantly smaller than other NHL arenas, or even Arizona Veterans Memorial Coliseum, which currently seats about 10,000 because some of its risers have been decommissioned and removed.”

5,000 seats would be way below anything that any NHL franchise calls home, and by a lot. Canada Life Centre, home of the Winnipeg Jets, holds a little over 15,000 seats, currently the smallest amount of any NHL arena. Gila River Arena holds 17,125 seats. The Coyotes have been averaging a little less than 14,000 fans per game this season.

The NHL hasn’t been shy about saying they want the Coyotes to stay in Arizona and they are likely to make an exception for the franchise even though the arena is way smaller than their capacity requirements.

Further to @CraigSMorgan's report of the Coyotes possibly playing in ASU's 5,000 seat arena for 3-4 years:

The NHL's capacity requirements are for full-time buildings. Due to this being a temporary/transitional situation, I'm told an exception could be made to allow it.

“While we have arena standards, we would approach the entire situation in a way intended to accommodate the club’s needs in effectuating a successful transition to a new venue,” NHL deputy commissioner Bill Daly wrote in an email to Morgan. “While there may very well be some, I can’t think of any hard and fast rules that couldn’t be relaxed to accommodate what is necessary.”

The deal does have some snags that need to be worked out first. NCAA compliance issues require the Coyotes to build their own hockey team areas separate from the ASU facilities without any financial support from the university. That could cost somewhere between $15 and $20 million. Also, that extra construction would require approval from the Arizona Board of Regents.’

It’s a pretty embarrassing situation for a professional sports franchise in one of the major U.S. leagues to be in. And the reactions on social media from NHL folks certainly reflect that.

They Coyotes should have to play the ASU hockey team every week. Winner gets to be the NHL team the next week https://t.co/WimcOG78zv

heading to an Arizona Coyotes game next season pic.twitter.com/gIHiMOCruS

the arizona coyotes’ next arena pic.twitter.com/26RPjUsFB1

It seems pretty obvious that the Coyotes should seriously consider relocating at this point, but the NHL seems dead set on making things work in Arizona, no matter what. Emphasis on “no matter what.”