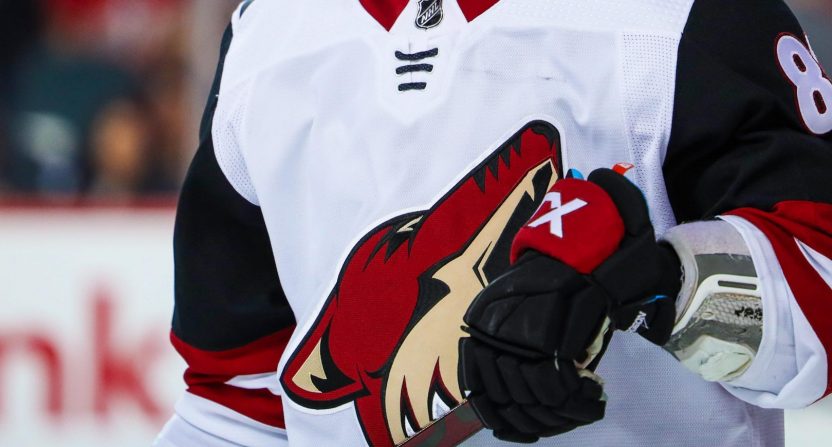 The NHL is on the verge of returning, with teams about to arrive in Toronto and Edmonton ahead of the resumption of play.

One of those teams, though, will be arriving amidst organizational turbulence. The Arizona Coyotes will have an acting GM, after John Chayka abruptly quit.

That’s certainly odd timing, but when the team did eventually comment, they didn’t hold back.

“John Chayka has quit as the General Manager and President of Hockey Operations of the Arizona Coyotes.

“The Club is disappointed in his actions and his timing as the Coyotes prepare to enter the NHL’s hub city of Edmonton, where the team will begin post-season play for the first time since 2012. Chayka has chosen to quit on a strong and competitive team, a dedicated staff, and the Arizona Coyotes fans, the greatest fans in the NHL.

“The Club is moving forward and has named Steve Sullivan as Interim General Manager. He has the full support of the entire organization including team ownership, executive leadership, players, and coaches.

“The Club will have no further comment on the matter, as the Club remains focused on the opportunity to pursue a Stanley Cup.”

That’s almost an unheard of level of public animosity! There are rumors that Chayka wanted out to go to another team, but the timing is incredible.

Chayka himself issued a statement as well, terming it an “impossibility” that he could have stayed in Arizona:

“The past four years have been the most enjoyable of my life,” Chayka wrote. “In Arizona, I became a husband and a father, while working as hard as possible to make the Coyotes a Stanley Cup contender. I love our players, coaches, staff and fans and I very much wish I could be with the team in Edmonton. Sadly, the situation created by ownership made that an impossibility.

“That’s all I intend to say on this matter for now. A fuller, more detailed explanation may be necessary in the near future. Until then, I wish the Coyotes good luck in Edmonton, and thank every member of Our Pack for the support shown to Kathryn, our daughter and myself over the years. Also, I want to congratulate Steve Sullivan as he steps into a new role. We’ve worked side-by-side for years. He is a great person and a terrific hockey mind.”

Richard Morin and Kent Somers had a bit more on the split in that Arizona Republic article, including this note about Chayka being kept in the dark by ownership over potential contract negotiations with players:

Rumblings of a divide between Chayka and the front office began earlier in the week when it was revealed that Chayka was not invited to a dinner meeting between Taylor Hall, Meruelo and his son, Alex Jr., and team president and CEO Xavier Gutierrez, according to an NHL source with direct knowledge of the situation.

According to the source, Chayka was not aware of the meeting and did not find out about it until the following day. Sources say a contract offer was made to Hall, who is set to become an unrestricted free agent at the end of the season.

Considering the tone of the team’s statement, it’s pretty clear that Chayka is probably right when he called his staying an impossibility. It’s hard to say which side is more at fault, obviously, but this kind of public airing of laundry is pretty rare, so tempers were clearly high for a reason.