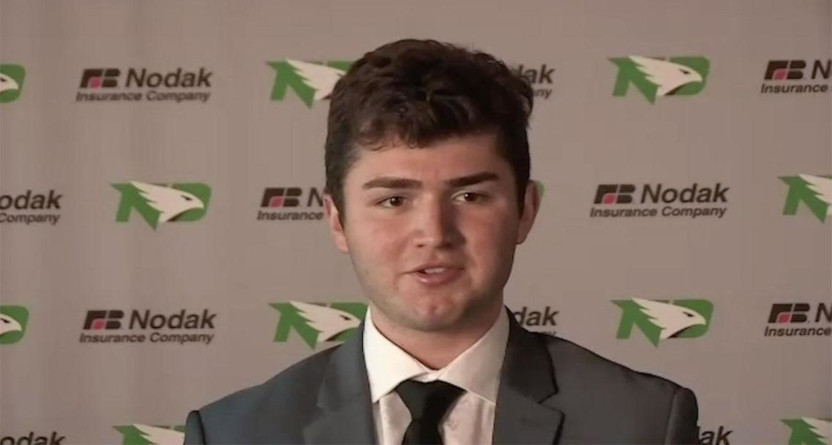 There’s a fair bit of history across sports of draft prospects’ past actions leading to their stock falling and/or leading to criticism for the team that drafts them, but it’s extremely rare to see a team actually change course after the fact and part ways with someone they drafted. That’s what’s now happened with the NHL’s Arizona Coyotes and Mitch Miller, though. The Coyotes didn’t have first-, second-, or third-round picks in this year’s draft (which took place Oct. 6-7), so their fourth-round selection (111th overall) was their first of the draft, and they used it on Miller, an 18-year-old freshman at the University of North Dakota. But that led to massive criticism after the highly-disturbing details of Miller’s past conviction for assault over bullying of  Black developmentally-disabled classmate Isaiah Meyer-Crothers were described by Craig Harris and Jose M. Romero of The Arizona Republic, and that’s now led to the Coyotes parting ways with Miller. Here’s more from their statement:

“We have decided to renounce the rights to Mitchell Miller, effective immediately,” said Coyotes’ President & CEO Xavier Gutierrez. “Prior to selecting Mitchell in the NHL Draft, we were aware that a bullying incident took place in 2016. We do not condone this type of behavior but embraced this as a teachable moment to work with Mitchell to make him accountable for his actions and provide him with an opportunity to be a leader on anti-bullying and anti-racism efforts. We have learned more about the entire matter, and more importantly, the impact it has had on Isaiah and the Meyer-Crothers family. What we learned does not align with the core values and vision for our organization and leads to our decision to renounce our draft rights. On behalf of the Arizona Coyotes ownership and our entire organization, I would like to apologize to Isaiah and the Meyer-Crothers family. We are building a model franchise on and off the ice and will do the right thing for Isaiah and the Meyer-Crothers family, our fans and our partners. Mr. Miller is now a free agent and can pursue his dream of becoming an NHL player elsewhere.”

“I fully support our decision to renounce Mitchell Miller’s draft rights,” said Coyotes’ General Manager Bill Armstrong. “It was a unique situation for me not being able to participate in this year’s Draft and we were going through a transition with our scouting department. Mitchell is a good hockey player, but we need to do the right thing as an organization and not just as a hockey team. I’d like to apologize to Isaiah and the Meyer-Crothers family for everything they have dealt with the past few months. I wish them all the best in the future.”

The Coyotes top priority is to be a leader on diversity, inclusion and equity and the club will continue to work with numerous local organizations including Best Buddies, One Step Beyond and the American Special Hockey Association to support people with intellectual and developmental disabilities. In addition, the Coyotes and the Arizona Coyotes Foundation will look to partner with local non-profit organizations fighting bullying and racism.

As Armstrong notes there, the circumstances with the Coyotes’ draft this year were quite unusual. Armstrong, previously the St. Louis Blues’ assistant general manager and director of amateur scouting, was hired by Arizona in September (following previous Coyotes’ GM John Chayka’s sudden exit in July), but on the provision that he not participate in the Coyotes’ 2020 draft. So Miller wasn’t his pick, and that perhaps made it slightly easier to make this decision to part ways.

But it should be noted that this only came after multiple days of intense media criticism for the Coyotes following the publication of those details of Miller’s past assault conviction, which included that Meyer-Crothers was “tricked into licking a candy push pop that Miller and another boy had wiped in a bathroom urinal” and that Miller repeatedly hit Meyer-Crothers and called him “brownie” and the n-word. And the team initially stood by the selection of Miller even after the revelation of that information, which was particularly awkward considering how this draft pick came a month after Guiterrez was named to the NHL’s Executive Inclusion Council. The eventual intensity of the public pressure here may have forced the Coyotes to reverse course, but this wasn’t something they were quick to do.

It is still quite remarkable to see a team renounce the rights to a draft pick, though, especially their top pick in a particular draft (even with that pick coming in the fourth round). There have been numerous cases of draft picks’ past behavior bringing up questions for their new team, as with New England Patriots’ fifth-round pick Justin Rohrwasser earlier this year and his “Three Percenter” militia tattoo, but that wound up with just a bunch of apologies and claims not to know what that tattoo represented from Rohrwasser (and while he didn’t make the Patriots’ active roster this year, there was no indication the tattoo had anything to do with that decision; he removed the tattoo this summer, and he’s currently on the New England practice squad). There have also been cases of prospects’ past behavior leading to them not being drafted at all, as with baseball player Luke Heimlich following the revelation of his sex offender status. But it’s rare to see a team pick someone, take criticism, and then decide “Okay, we’re fine letting them go.” (And this speaks to the need to look into players more significantly before you draft them.)

As per what this means for Miller, it may not mean much of anything immediately. The NHL draft is a little different than the MLB, NFL or NBA ones when it comes to college players; if NHL teams don’t immediately sign a drafted college player, that player can stay in college, and the NHL team retains their professional rights through their NCAA career (however long they want that to be) and until 30 days after they’ve left college. So it was likely that Miller was going to stay with North Dakota for at least this season anyway. (However, it’s notable that there’s even some pressure on that team to move on from him.) And if other NHL teams feel he’s worth taking on when he decides to leave college, they can do that. But that’s very much an open question at this point.