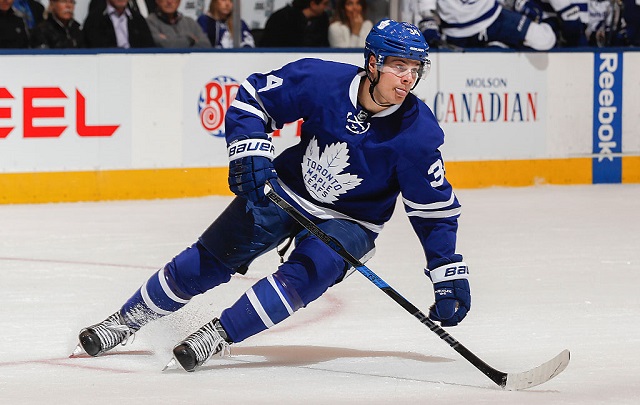 It was inevitable for a team relying so heavily on young players like 19-year-old wunderkind Auston Matthews, but the Toronto Maple Leafs have endured some struggles over the last week, leading to a matchup with the Edmonton Oilers that’s sure to make the NHL giddy with anticipation.

After a four-goal debut and 10 points recorded in his first six professional games, Matthews, the top overall pick in June’s draft has gone the last three contests without a point as the Leafs have fallen to the bottom of the Atlantic Division standings.

“I think we’ve just gotta continue to do what we’re doing,” Matthews told reporters after Sunday’s 5-1 loss in Brooklyn against the New York Islanders, Toronto’s sixth defeat in its last seven games. “I thought we created a lot of opportunities tonight.”

Matthews is fourth in the league with 36 shots on goal, and said that he’s not sure if he’s being defended differently by teams since the regular season began three weeks ago. While opposing teams have likely taken notice of Matthews’ immense talents, Toronto fans surely have, as several No. 34 jerseys were seen in the Barclays Center stands already.

That seems like a typical response for the Leafs’ American-born savior. Matthews grew up in Scottsdale, Arizona, going to Coyotes games and developing his skills in local youth programs. He then played two years for the U.S. National Team Development Program before spending a season playing professionally in Switzerland, so he’s learned how to deal with some scrutiny and lofty expectations from Torontonians desperate for winning hockey.

“Just the poise off the ice as far as how he handles himself, you can tell he’s a confident guy and he doesn’t let much faze him,” forward James van Riemsdyk told The Comeback. “And his talent on the ice kind of speaks for itself, the way he just thinks the game and creates space and how he puts himself in different areas on the ice.”

Toronto is currently led in points by Matthews’ linemate, 20-year-old William Nylander. Third on the team in points behind Matthews is 19-year-old Mitch Marner, the fourth overall pick in the 2015 draft.

“They’re really contributing and they’ve been really pulling the rope for us and key members of our team,” van Riemsdyk said of the younger players. “They all obviously came in highly regarded and those players are definitely playing up to their expectations.”

The importance of Toronto’s younger players, most notably Matthews, is why Tuesday’s home game against Connor McDavid and the Oilers is such a highly anticipated matchup. Edmonton is currently leading the Western Conference standings and McDavid is tied for the league lead in points with 12.

“It’s more for your guys’ storylines,” van Riemsdyk said of the media, trying to dim down the hype. “For the fans, I’m sure that’ll be cool to see.”

But for Matthews, who played on a line with McDavid on Team North America in September’s World Cup, it’ll be a fun little early measuring stick for him. Matthews praised McDavid on how easy it is to play with him and how he can play so well at a really high speed.

“They’ve obviously gotten off to a pretty hot start, so that’s going to be a good challenge for us,” Matthews said. “We’ll be hungry to get back in the win column.”

Predictably, Toronto head coach Mike Babcock wanted to focus on the team matchup for Tuesday — rather than the Matthews-McDavid angle — and was not concerned about the team’s offensive struggles of late.

Indeed, Toronto’s 35 goals allowed is tied with Calgary for the most in the NHL. And while Matthews has enjoyed a large amount of success over his first nine NHL games, he was more focused on how he can improve on face-offs. He’s lost 51.6 percent of his face-offs, which is not that bad for a 19-year-old kid.

“It’s a long season, so hopefully we’ll just continue to get better,” Matthews said, as he begins to learn how to deal with adversity in the NHL for the very first time.