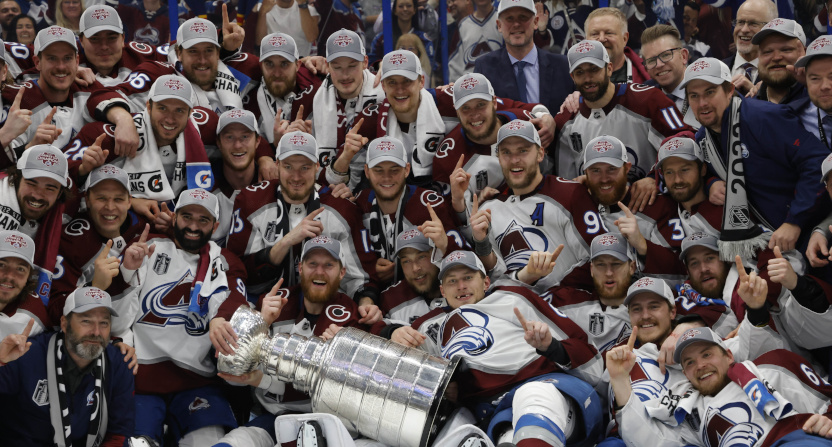 The Stanley Cup Final wrapped up Sunday night with the Colorado Avalanche winning Game 6 2-1, giving them a 4-2 series victory against the two-time reigning champion Tampa Bay Lightning. That win, led by goals from Nathan MacKinnon and Artturi Lehkonen plus 22 saves from Darcy Kuemper, boosted Colorado’s remarkable playoff run this season to 16-4. And that 16th postseason win put the Avalanche in some rarified air, considering their Western Conference-best 56 wins this season. That gave them 72 combined wins in the regular season and playoffs, matching the record held by three remarkable past teams: the 1976-77 Montreal Canadiens, the 1983-84 Edmonton Oilers, and the 1995-96 Detroit Red Wings.

Of course, there are some differences in those past seasons thanks to how the NHL has changed over the years. The ’76-77 Canadiens recorded 60 wins, eight losses, and 12 ties in their 80-game regular season, setting a still-standing league record with 132 points and outscoring their opponents by a record 216 goals. But the Stanley Cup playoffs at that time were limited to 12 teams, with the top four seeds getting byes through the preliminary round. So they only put up 12 playoff wins (going 12-2 across three series, with their only two losses coming in the semifinals against the New York Islanders).

Meanwhile, the ’83-84 Oilers notched 57 wins, 18 losses and five ties across 80 regular season games (119 points), then went 15-4 in the playoffs (thanks to the first round being a best-of-five at that point). And the ’95-96 Red Wings posted 62 wins, 13 losses, and seven ties in 82 regular season games for 131 points, but then only posted 10 playoff wins, falling to the Avalanche in six games in the Western Conference Finals (a series explored heavily in ESPN’s recent Unrivaled documentary). By contrast, this season’s Avalanche posted 56 wins (10 in overtime, including four in shootouts), 19 losses, and seven overtime losses in 82 regular season games before going 16-4 in the postseason.

While all of those seasons are different, the Avalanche have entered some rarified air here. And what’s perhaps most interesting is that they did so without a 100-point scorer in the regular season. Each of those past three teams had at least one player well over that mark, with the ’76-77 Canadiens getting a 136-point season from Guy Lafleur and a 105-point one from Steve Shutt, the ’83-84 Oilers boasting a 215-point season from Wayne Gretzky, 126-, 113-, and 101-point seasons from Paul Coffey, Jari Kurri, and Mark Messier respectively, and 99 points from Glenn Anderson, and the ’95-96 Red Wings featuring 107 points from Sergei Federov and 95 from Steve Yzerman.

By contrast, Colorado’s top scorer this season was Mikko Rantanen with 92 points, followed by MacKinnon (88), Nazem Kadri (86), and Cale Makar (85). And the 23-year-old Makar is perhaps one key figure to point to for their success. Makar won the Norris Trophy as the league’s best defenseman for his regular season play and the Conn Smythe Trophy as playoff MVP following an eight-goal, 21-assist postseason, joining Bobby Orr and Nicklas Lidstrom as the only players to ever win those awards in the same campaign, and joining Orr and Brian Leetch as the only players to have a Norris, a Conn Smythe, a Calder Trophy (for rookie of the year, which he won in 2019-20), and a Stanley Cup by 23. And he was certainly a crucial part of the Avalanche’s run into history here.