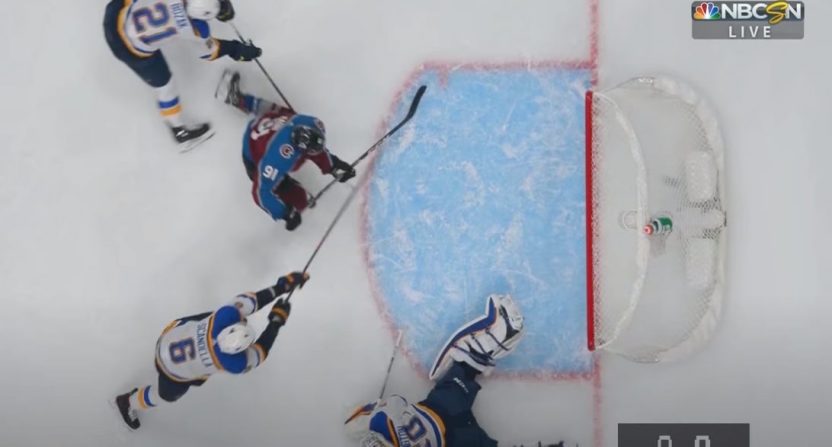 The NHL is back, and we’ve already seen some bizarre moments that have been fitting of this strange new normal. Amidst the craziness around the rink (no fans, players living in a bubble, reversed audio), there’s also been some pretty wild hockey. Nazem Kadri of the Colorado Avalanche provided one of those unique moments with a third-period buzzer-beater to defeat the St. Louis Blues on Sunday night.

The Avalanche used a late power play opportunity to pour it on the Blues in a tight 1-1 game. The Blues were gassed and reduced to a walking pace, helpless as the Avalanche generated chance after chance. Finally, what appeared to be a last-second shot clanged off the bar. But, Kadri somehow managed one last gasp that will go down in the history books.

Not even the overhead view with the clock overlay and the video advancing frame by frame could produce a clear decision. The NHL ultimately ruled it as a good goal, but you’d have a hard time providing any conclusive video evidence. There’s a blur on and just over the line at 0.1, and then the puck is in the net at 0.0. We can assume where the puck is between 0.1 and 0.0, but finding a conclusive image with the views offered appears to be impossible. We won’t even begin to argue how the blur of the puck makes knowing where the puck is a guessing game.

Immediately after it happened, we felt like we just witnessed something we had never seen before. Was this the closest buzzer-beater in NHL history?

There are a couple other goals that may give Kadri’s goal a run for its money, but the majority have at least some time left on the clock when they go in. We’re not sure any are as close or as debatable as Kadri’s winner. Take a look at this compilation:

Want some more NHL buzzer-beaters? Of course you do.

And if you’ve come this far, why not watch some more?

Buzzer-beaters aren’t normally associated with the sport of hockey. The nature of the game just doesn’t allow for it to happen too often. When it does, usually there’s a few seconds – or tenths of a second – still on the clock and there’s no real debate over whether it’s a good goal. Given how off the wall this year has been (an understatement), maybe it shouldn’t be a surprise Kadri’s shot foiled the reliable overhead angle.

While there may never be a statistical way of proving Kadri’s shot broke any records, his buzzer-beater should serve as an example to all hockey players of the importance of playing the full 60 minutes.