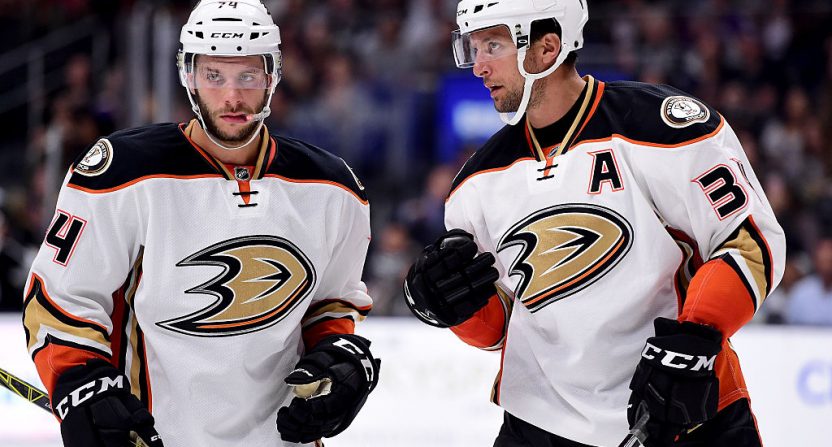 The best NHL teams tend to have four good forward lines. “We like that we can roll four lines,” say coaches ad nauseam. Especially in the postseason, having a fourth line that can control possession during its 10 minutes or so of ice time can be the difference between winning and losing a Stanley Cup.

The reality, though, is there aren’t enough good forwards to go around. Some teams have utter disasters of fourth lines. Fighting is on the decline, so only a few teams have a fourth line featuring a useless pugilist, but they are out there. Having that sort of fourth line is a death knell in the postseason, but no one ever considers what that can do for a team over 82 games.

That got me thinking — why do teams with a trainwreck fourth line ice a fourth line at all?

This was my reasoning: Let’s say your fourth line is playing nine minutes or less at even strength per game. That’s three minutes of fourth-line ice time per period, which becomes about four shifts per period you need to redistribute to your top three lines in some order. So if you have a bad fourth line you’re barely using, you could get rid of it and use your top three lines for one extra shift per period.

Again, if you’re getting steady contributions from your fourth line, look away. But if your team fits that profile, why wouldn’t you consider this?

One team that should look into this: the Anaheim Ducks.

The Ducks have had a few players shuttle in and out of the fourth line, so here is average even-strength ice time and raw Fenwick numbers for those guys:

It’s a disaster. The Ducks are just about dead even in Fenwick, so whenever three of these gentlemen are on the ice, they are a drag on the team’s overall possession numbers. They have combined for 10 goals in 55 games, so it’s not like you’re getting finish from them. It’s a rough collection of forwards.

The other team that could benefit from dropping its fourth line: the Winnipeg Jets.

Against the Dallas Stars last Thursday, Nic Petan, Mathieu Perreault and Chris Thorburn all played less than seven minutes at even strength. It wasn’t even a particularly odd game that caused coach Paul Maurice to keep his fourth line glued to the bench, as there were only four total power plays and the Jets were leading for most of it.

The difference between the Jets and Ducks is the Jets’ fourth liners — Thorburn aside — aren’t useless hockey players. Petan (51.5) and Perreault (52.0) keep the Jets in the black when it comes to shot attempts. But when Perreault is playing top-nine minutes (as he should) and Maurice has to use Brandon Tanev (41.7), why use the fourth line at all, especially when the Jets have a lot of talent in their top nine and are on the fringe of playoff contention?

If the Jets said “screw it” and bagged their fourth line over the rest of the season, would that give them a better chance of being a playoff team than if they were to use their bad fourth line for seven minutes per night?

It’s safe to say if you’ve gotten this far, you’ve already raised your hand because you have obvious questions. Let’s get to them.

What about fourth-line guys that kill penalties?

No one is saying not to dress these guys. Just leave them glued to the bench while the better hockey players take the ice for even-strength hockey. Your follow-up question likely has to do with staying in the flow of the game and avoiding rust between PK shifts. My response is a) these guys are barely in the flow of the game as is and b) tough crap.

Half your penalty killers (the defense) will be in the flow of the game and it will be up to the forwards to find a way to stay loose. Take twirls during TV timeouts. Think of fourth-liners that kill penalties as relief in pitchers in baseball. They can get up and get warm during breaks so they’re ready when called upon. Every sport has specialty players.

If a goaltender can come into a game ice-cold without warmups and play well, a fourth-line forward can do the same for a 45-second PK shift three to four times per game.

Your other question probably has to do with the workload on everyone else. Again, fair. I don’t even have a condescending answer like I did for the previous question. You’re asking your top-nine forwards to jump as much as three minutes in ice time per game over 82 games. It’s not a small ask.

Here’s my totally “never played the game” answer: Every game has three TV timeouts per period (barring continuous play in the last six minutes). Most games have at least one endless goal review that will make you wish you were dead. There are two 15-minute intermissions. Immediately after games, guys are working out hard with either plyometrics, weights or a bike ride.

With all the breaks and obvious run-off energy after games, it would just take some adjustment for the good forwards that get extra ice time, but it seems the transition wouldn’t be all that difficult. Heck, do away with morning skates. Save legs that way.

There’s no precedent that says this will work. In October 2010, thanks to the Ilya Kovalchuk contract pushing the team against the salary cap along with some injuries and a suspension, the Devils used nine forwards in a 3-1 loss to the Penguins. But it wasn’t a total disaster — the Devils had 31 shots and two of the goals they allowed were on the penalty kill and into an empty net. It’s not as though the Devils got run over by a team that had Sidney Crosby and Evgeni Malkin.

Considering it was done out of necessity, the Devils did OK that day.

The Ducks probably don’t need to go to this route because, as they are eight points clear of ninth place in the West. They’re also an older team, so heaping extra minutes on guys in their 30s isn’t exactly a great recipe for success.

Then again, consider the Ducks’ 4-1 loss to the Rangers on Tuesday, which was a 2-1 game in the third period and a contest the Ducks thoroughly dominated… except for their fourth line. Cramarossa, Thompson and Shaw were an even 50 percent in raw Fenwick in about six minutes of ice time; the team as a whole was at 63.4 percent in Fenwick, so maybe instead of wasting those six minutes treading water, an extra shift for a top-three line may have meant a tie game.

If the Ducks are too old and secure in a playoff spot, why not the Jets? Most of their forwards are under the age of 25. Drew Stafford is the oldest at 31. They only have three back-to-back sets the rest of the way. They’re five points out of a playoff spot. How much better off would the Jets be if they took the 180 even-strength minutes coming toward Petan over the rest of the season and spread them around the likes of Patrik Laine, Mark Schiefele and Nikolaj Ehlers?

If you’ve got 12 forwards who can play, there’s no need to consider this. But if you have nine who can play and three that bring nothing to the table and quite frankly knock crap off the table that the other nine guys have to pick up, why invite those three guys to the table in the first place?

1 thought on “Why do NHL teams with bad fourth lines bother, instead of maxing out top three?”