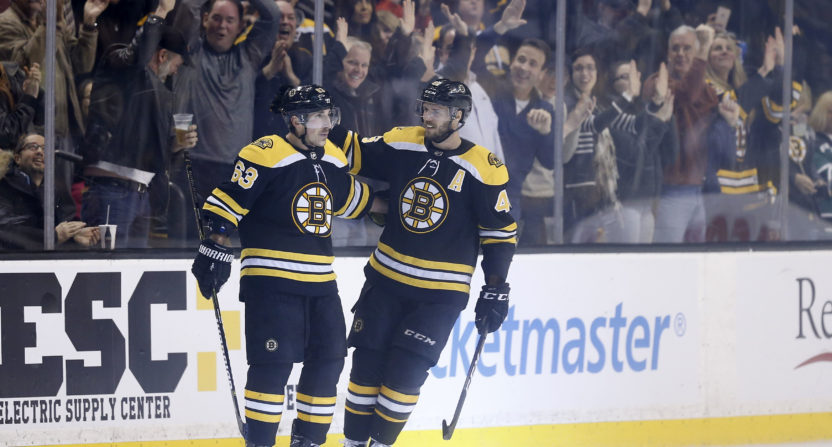 Flash back to the 2015 NHL Entry Draft. Don Sweeney was the new GM of the Boston Bruins and had three consecutive picks to make. He took Jakub Zboril, Jake DeBrusk and Zach Senyshyn. Everyone laughed. Two of those players have not yet played in the NHL, and the Bruins passed up players like Brock Boeser, Matt Barzal and others who could have helped them right away.

Later that offseason, Sweeney made other questionable moves such as trading Reilly Smith for Jimmy Hayes, and handing out a massive UFA deal to Matt Beleskey. Neither of those moves worked out at all. Last season, they replaced Claude Julien with one of the biggest busts in recent NHL coaching history in Bruce Cassidy. Everyone laughed again.

So what has made the Bruins so great?

Their top line of Marchand, Bergeron and Pastrnak is still as lethal as it has always been, but they’ve gotten good contributions from David Backes, David Krejci and others who many thought were not up to the task or who were past their prime. When healthy, those players have contributed in a decent way, certainly more than anyone thought possible. But no one could have foreseen the season that Danton Heinen is having, or even Jake DeBrusk, Anders Bjork. And there’s Calder trophy candidate Charlie McAvoy, who has dominated the league in ways few young defensemen have in recent years, though his absence due to an irregular heartbeat is concerning.

But what’s more impressive is how Sweeney has put this all together this quickly. Last year, the B’s made the playoffs, but they were a year ahead of schedule and benefited from a collapse from the Red Wings and an injury to Steven Stamkos that derailed the Bolts. And while they’re in the mediocre Atlantic division still, a 16-game point streak rises beyond that. While the baby B’s have found a way to contribute in major ways, its still the old guard leading the way to Boston’s meteoric rise.

That falls of course on Bergeron, Marchand and Torey Krug, who has been sensational of late, but it also comes from Zdeno Chara fighting Father Time as good as Tom Brady has, and Tuukka Rask finding himself again. Cassidy has stitched it all together with a style that allows Boston to be a great puck possession team as they’ve always been, but they’re faster than they used to be, while still carrying the same sort of edge.

The modern NHL is dominated by young players, and a long suspect defensive unit has been buoyed by McAvoy, Carlo and Grzelcyk, and the forwards have been made better by Pastrnak taking the next step. It’s not a revolutionary combination, but it is one that turned a franchise teetering on the precipice of a disaster on the ice and in the salary cap to a team that suddenly has a chance to establish itself as one of the best in the league going forward.

Watching the Bruins skate the Canadiens and their old coach Claude Julien out of the building last Wednesday night in Boston, coupled with three wins over the Habs in eight days shows how the paradigm has shifted in Boston after a couple of seasons sans playoffs and many moves from Don Sweeney that were roundly lampooned.

And in this wide open NHL, where anyone can win a seven-game series and teams are so tightly crunched together, the Bruins have every chance to crack open the Eastern Conference with a mix of youth and veterans who have already hoisted the Cup in tow.