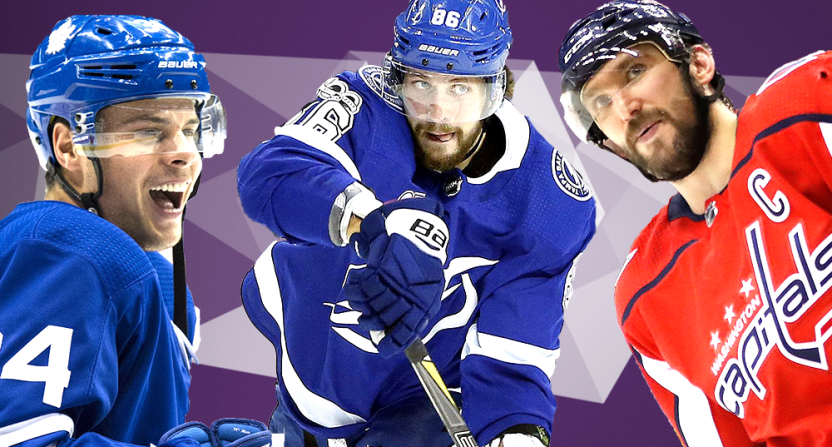 The NHL playoff picture is becoming clearer as the season unwinds in the coming months and with it, teams who are true Stanley Cup contenders has become clearer and clearer. While there’s a handful of teams good enough to compete for hockey’s biggest trophy in 2018-19, five teams in particular stand out as the best in the bunch.

Winnipeg was three wins away from competing in the 2018 Stanley Cup Finals after surprisingly falling to the Vegas Golden Knights. They should be just as competitive this time around.

The Jets have everything a contending squad needs: High-end point producers in right winger Blake Wheeler and center Mark Scheifele, a deep defensive unit featuring Jacob Trouba, Josh Morrissey and Dustin Byfuglien, and an above-average goaltender in fourth-year pro Connor Hellebuyck. On paper, the Jets have what it takes. They’re well-coached and equipped well for a grittier playoff style.

However, with star sniper Patrik Laine going 12 straight games without a goal, the Jets need an offensive boost. Buying at the trade deadline and adding more depth to a well-rounded roster would go quite a long way into keeping the team’s Stanley Cup dreams a reality. It’s time for them to completely buy-in as contenders.

It’s been an incredibly fun season in Toronto, as offseason star signee John Tavares has masterfully fit alongside center Auston Matthews, winger Mitch Marner, and defenseman Morgan Reilly, the latter being one of the most improved players in the NHL. Toronto’s offense is ridiculous. Guys like Nazem Kadri, William Nylander and Andreas Johnsson would all be top-six talent on virtually any other team. On Toronto, it’s their third line. The young core is impressive. Frederik Andersen has been a workhorse between the pipes for the club and has proven he’s one of the best netminders in the league.

With a loaded offense and power play, what’s holding the Leafs back is defense and timing. GM Kyle Dubas swinging a trade for Los Angeles puck-possession extraordinaire Jake Muzzin helped the backend. But, the defense needs work. Replacing Ron Hainsey (a favorite of coach Mike Babcock) and Nikita Zaitsev and adding to the club’s fourth line would give Toronto more support. The Leafs are also extremely young so inexperience might hurt come playoff time. Still, there’s no denying the team’s competitive window is open for business.

The Capitals are having a so-so season after winning the Stanley Cup in 2018-19, but in no way should they be counted out.

Washington has the league’s most dangerous goalscorer in Alex Ovechkin, who in his age-33 season leads the league with 33 goals and looks as motivated as ever. The Caps have had no issues scoring, but what’s kept them from being an elite team is the team’s defense and goaltending. Not much has changed on Washington’s roster, but with coach Barry Trotz bolting for the New York Islanders, new coach Todd Reirden hasn’t been able to fix a below-average defense. Washington’s defense and season-long poor performance from goalie Braden Holtby have contributed to the team’s biggest struggles.

Getting creative and adding a first-pair defender at the deadline would shore up the backend. Even if they don’t make a move, the Capitals are riding the momentum from last season. Will that be enough to take them back to the Cup Finals? It might just be.

After making it to the Stanley Cup Finals a couple seasons ago, the Sharks have won only a single series in the past two years. I’d bet this San Jose team will win at least one more series before the playoffs end. For one, the team is really dang good. Forwards Tomas Hertl, Logan Couture, Joel Pavelski, Evander Kane, and Timo Meier give San Jose a very deep top-six. On defense, with Brent Burns and offseason acquisition Erik Karlsson, they’ve got two of the ten best rearguards in the league. They lead the West with a whopping 210 goals.

Like most teams on the list, they could add more depth at the deadline. But, the biggest thing needing to be addressed is goaltending. Martin Jones’ 27-10-4 record looks great at first glance, but his .899 save percentage is well below average. The 29-year-old has played much better post-All-Star break, but at the very least the Sharks should add a quality 1B starter in case Jones struggles.

San Jose has legitimate veteran talent with some good young players sprinkled in. It’s time to win a Cup for Joe Thornton.

When it comes to contenders for the Cup, the Lightning are on a tier ahead of everyone else.

There’s no team with a better combination of talent on offense and defense than Tampa Bay. Winger Nikita Kurcherov is leading the NHL in points with 88 points in just 57 games, while centers Brayden Point and Steven Stamkos both have scored 30+ goals and average well over a point per game. Behind the big three, the Lightning assembled near-perfect depth throughout their lineup. Defensively, the top-six is excellent. Victor Hedman, Ryan McDonagh, Anton Stralman, and Mikhail Sergachev are perfectly placed in roles suited for them. Between the pipes, Andrei Vasilevskiy has been a stable force – even if the Lightning don’t really need him to be.

Tampa Bay has won at home and the road. They’ve got the league’s best power play and a top-five penalty kill. They’re completely stacked at key positions and could still add to their roster. It’s their cup to lose.