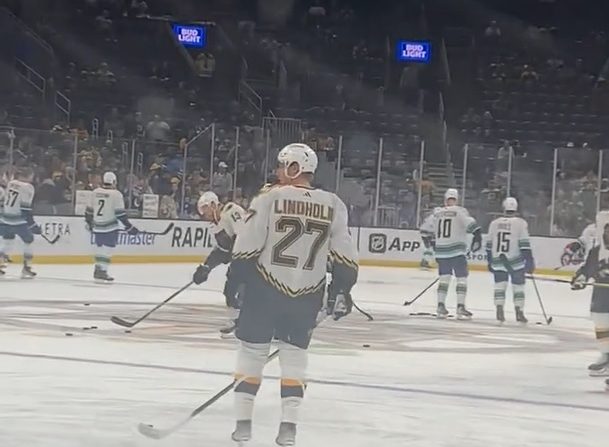 In hockey games, as in all team sporting events, it’s necessary for the two teams to wear different colored uniforms. The reason is obvious. If everyone is wearing the same colored shirt, it’s going to be hard for the players, officials, fans and anyone else to differentiate the two teams. But while it’s necessary, being sure that the two teams are wearing different uniforms is usually an easy step. That wasn’t the case, though, for the Vancouver Canucks and Boston Bruins on Sunday.

When the Canucks and Bruins came out for their pregame warmups, both teams were in white sweaters.

Bruins and Canucks are both wearing white in warmups. I’m thinking someone might have to change. pic.twitter.com/uLZ7kMueAl

The Bruins donned their white retro sweaters, apparently not telling anyone that they were going to do so.

Bruins weren't supposed to wear these again until next week. https://t.co/WmczP5x5tW pic.twitter.com/VSBsJ2Xx6I

Hockey fans had a lot of fun with the mishap.

White on white sweaters, the Bruins have a bunch of Canucks and the Canucks have a guy named Bear. It's madness here

I had no interest in this Canucks bruins game until I found out they were both wearing white. Don’t change please

I’ve been told the Canucks and Bruins sweater situation is fixed.

The Bruins will be playing naked.

As fascinating as it would be to watch two teams wearing the same color jerseys, it’s not the best idea. Hockey is a dangerous enough game as it is. Imagine what it would be like if teammates were checking each other. Something had to give here.

Given that the Bruins were the home team on Sunday and likely had easier access to darker-colored sweaters than the Canucks, Boston players changing their sweaters was the obvious move.

OK, the Bruins are back in black for puck drop. Carry on.

For the sake of everyone’s collective sanity, that’s probably for the best.