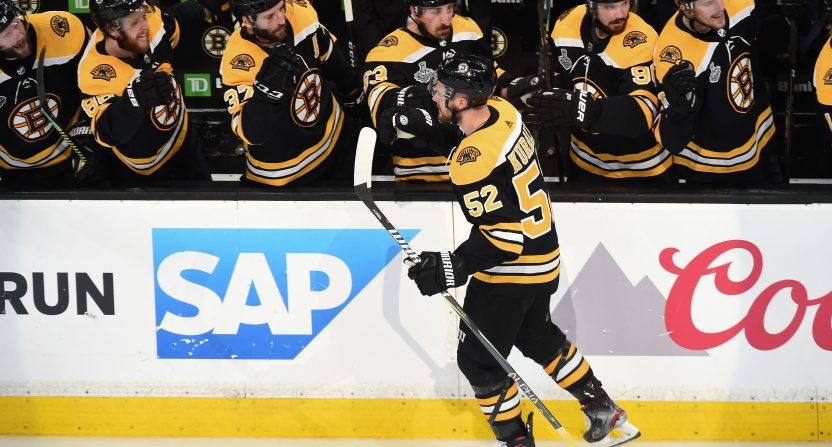 The beauty of the Stanley Cup is that it’s one of the most difficult journeys in sports to win a championship and the game can shift in the blink of an eye.

That’s just what happened in Game 1 of the Stanley Cup Final as the Boston Bruins came back from a 2-0 deficit to beat the St. Louis Blues 4-2 in Boston.

The Blues got out to an early lead thanks to a Brayden Schenn strike within the first eight minutes. Once the second period began, Schenn took advantage of a huge David Pastrnak mistake and matched his goal with an assist as Vladimir Tarasenko doubled St. Louis’ lead.

The first goal of the 2019 #StanleyCup Final!

Just moments into the 2nd period, the @stlouisblues extend their lead. #StanleyCup

But almost immediately after the Blues doubled the lead, the Bruins roared back. First, Connor Clifton got just enough of the puck to put it within one. And then just 10 minutes later, Charlie McAvoy provided the tying goal.

The @NHLBruins are on the board!

They cut the lead in half.

TIE GAME. @CMcAvoy44 with the equalizer.

Unfortunately, bad officiating by NHL officials reared its ugly head for Game 1. At times throughout the game, it seemed like the refs were willing to let things go and let the teams play on but at other times, they were calling it too strict. A referee who is loose or strict can be left to what each individual prefers in a ref but it doesn’t help anyone when that changes midgame because then the players aren’t sure what to do with that inconsistency.

Despite that, and whether or not people felt the Blues were screwed over, the Bruins did outshoot the Blues 38-20 throughout the game and 30-12 in the final two periods. The Blues didn’t exactly help their cause when the Bruins were flat out outshooting them.

Because of that, the Bruins grabbed the lead in the third period and never looked back. Sean Kuraly scored the go-ahead goal with 15 minutes left and after Brad Marchand empty net goal, the Bruins took control of Game 1. If you were to have placed a bet, you could have won big on Boston!

.@kurals9 gives the @NHLBruins their first lead of Game 1.

Game 2 is on Wednesday and it’s going to be a race to see if the referees or the Blues can improve on tonight’s performance. I won’t say whether they’ll win or lose but if I had to choose, I’ll bet the Blues improve and not the refs.