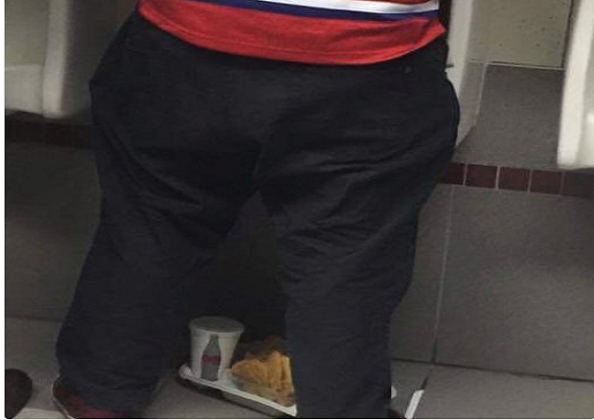 There are limited opportunities for the NHL fan to do two things during a live game — go to the bathroom and get food and beverages. So, multi-tasking when getting out of your seat is usually on the cards.

However, one Montreal Canadiens fan violated every sense of decency, common sense, and intermission etiquette, in one move earlier this week. The man decided to multi-task in the wrong order by ordering up his food first, and relieving himself while trying to store his purchase of nachos below the urinal in front of him.

Seriously, man? Please tell us this etiquette-breaking fool didn’t then pick up said nachos and other food and eat them. Excuse me while I also go to the bathroom and heave into the toilet at that thought alone.

Nevermind the fact that said dude clearly could’ve used a free hand to hold onto the nachos. This also coming from a fan who isn’t drinking beer, but has a cola in his stash under the urinal.

That is just some straight-up amateur sports bathroom etiquette, man. That’s something my dad taught me when I was 8, something his dad surely taught him at a young age, and something you certainly should’ve picked up by now.

I guess that’s what we get from a guy in a Shea Weber jersey, huh?

Oh, and unless this situation arises again, can we please refrain from bathroom pictures ever being taken in the men’s room again? Seriously.