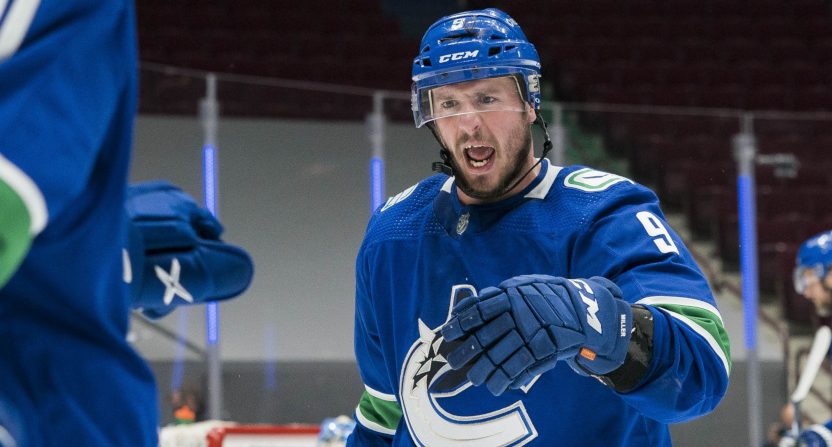 One of the most notable COVID-19 outbreaks in any sport has come from the NHL’s Vancouver Canucks, who have been out of action since their March 31 game against the Calgary Flames was postponed 90 minutes before puck drop after a second Canucks’ player was added to the league’s COVID-19 protocol list (alongside one coach). That list rose to 17 players and three coaches by April 5, and 21 players and four others had tested positive by April 8. The team was supposed to resume workouts Sunday (April 11), but that date got pushed back after Jay Beagle became the 26th member of the franchise to test positive.

The Canucks did have 10 players skate Monday, and general manager Jim Benning said then that they were on track to resume play Friday against the Edmonton Oilers, the date the league has scheduled for their restart. But not everyone’s happy with that plan, which has Vancouver playing their first game since March 24 shortly after 11 days of no in-person team activities whatsoever, doing so with only a few days of practice, doing so with seven players still on the COVID-19 list as of Wednesday, and then cramming 19 games into 31 days to help the NHL start its playoffs by May 16 while still having the Canucks play a full season. (And even then, the league has said they may start playoffs in other divisions before that.)

Vancouver forward J.T. Miller (seen above celebrating a March 13 win against Edmonton), one of the few players who didn’t test positive for COVID-19, told reporters Wednesday he doesn’t think this plan is safe. Miller said that’s especially true given the tough battles many of his teammates have had with the disease. Here’s more on that from Emily Kaplan of ESPN:

Vancouver Canucks forward J.T. Miller thinks his team is being rushed onto the ice after a COVID-19 outbreak, saying it is “dangerous to a lot of players.”

“What we’re being asked to do is not going to be too safe, if you’re asking me,” Miller told reporters on Wednesday.

Miller added: “It’s kind of frustrating, if I’m being honest with you. We try to talk about the No. 1 priority being the players health and their families’ safety, and it’s almost impossible to do what they’ve asked us to do here on our return.”

…Many infected players and their families were symptomatic, including some who had fatigue, body aches, chills and dehydration. At least one player required an IV, sources told ESPN. Miller said he had some teammates that were “struggling to breathe going up and down steps.”

And more still from Daniel Wagner at Vancouver is Awesome:

“To expect pretty much our entire team to be ready to play after a practice and a pregame skate is a little bit hard to comprehend,” said Miller. “For guys coming off of three weeks of rest, two weeks of having COVID, one practice isn’t even close to near enough time to come back and perform at a high level.”

“It’s not even about being able to perform, it’s nothing to do with hockey at this point,” he said. “Brutally honestly, I think that we’re gonna need more time than this to come back and play hockey. Even the guys that didn’t get it, we’re not ready to play.”

Miller was one of those few Canucks who evaded the virus and made it clear he doesn’t feel prepared to play on Friday, let alone 19 games in 31 days.

“I don’t really feel ready at all, to be completely honest,” he said. “Skating a couple times and my lungs are screaming and I’m definitely not in game shape at all right now from sitting around and not doing much. I couldn’t imagine what these guys are gonna have to go through to get back and be ready to play at a high level.”

Those are quite the quotes to see from an active player. And they raise further questions still about what the NHL is hoping to accomplish by having the Canucks finish out their full scheduled season. The team is sixth out of seven North Division teams, 10 points back of the Montreal Canadiens for the fourth and final playoff spot in the division. And while they’re 6-3-1 in their last 10 games, and while they have some games in hand (two on the Canadiens), it’s at the very least unlikely that they’re going to make the playoffs. And that’s especially true with them missing so much time due to this pause and having such a compacted schedule after it.

Yes, there are competitive reasons to try and make sure that every club plays the full planned 56-game season. The schedules can get lopsided without that, and just saying that one team doesn’t have to finish the year wouldn’t be easy. And likely even more importantly for the league and the team, there are financial reasons to make the Canucks finish the season (especially around the broadcast rights, both local and national). But trying to push for a season completion in this manner does seem potentially “dangerous to a lot of players,” as Miller notes.

And there are competitive concerns with this plan, too. The teams that play the Canucks more after this pause would seem to have an advantage versus the ones that already faced the team. The North Division teams in current standings order (ignoring the sixth-place Canucks) are the Toronto Maple Leafs (four remaining games versus Vancouver), the Winnipeg Jets (two), the Edmonton Oilers (five), the Canadiens (zero), the Calgary Flames (four), and the Ottawa Senators (four). So that feels like a significant disadvantage for the Canadiens and Jets versus those other teams.

If the league and the Canucks are determined to finish out the remainder of Vancouver’s season, it would seem to make a lot more sense to at least give it a further delay and spread it out more. Yes, the NHL absolutely wants to get its playoffs going, and the timeline here is already beyond their initially-planned May 11 postseason start (which itself is way beyond their usual mid-April start). And the league can’t let the playoffs run too late, or they risk having a messed-up 2021-22 season as well. (There also may wind up being further COVID-19 delays during the playoffs.) But the determination to persevere with this Canucks’ season at all costs and in as short of a timeframe as possible is drawing major pushback from many, and it’s notable to see that now extending to an active Vancouver player. It will be interesting to see if Miller gets support on this from teammates and/or the NHLPA, and it will be interesting to see if his pushback causes any change.