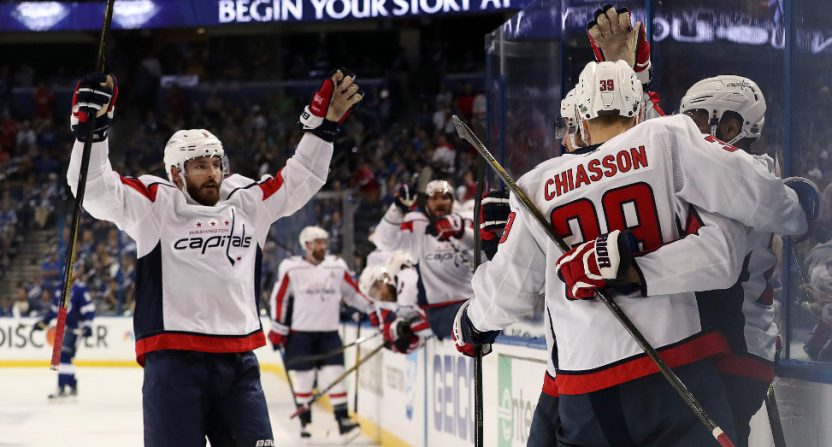 The second game of the NHL’s Eastern Conference Final Sunday started poorly for the Washington Capitals, as despite an early 1-0 lead, they then gave up two goals to the Tampa Bay Lightning after questionable penalty calls and fell behind 2-1 by the end of the first period. But from there, it wound up being all Caps. First, early in the second period, Lightning forward J.T. Miller drove into the Washington zone and tried a pass in front of the net, but defenseman John Carlson intercepted that and found forward Alex Chiasson with a breakout pass the other way. Chiasson then raced in on a three-on-one, and sent a perfect pass to Devante Smith-Pelly, who fired the puck back across the goal to beat goalie Andrei Vasilevskiy:

Here’s another look at that:

Washington then took the lead on a Lars Eller goal with just over a minute left in the second period, and then wound up on the power play in the final seconds. And the Capitals made the most of that with a crushing goal from Evgeny Kuznetsov with just a couple of ticks left on the clock, one that went in off Vasilevskiy himself:

Then, in the third period, Washington captain Alex Ovechkin gave his team a 5-2 lead on another odd-man rush, which he started with an impressive defensive play of his own:

Brett Connolly would then add a sixth at 12:57 of the third period, making the final score 6-2. And that puts the Capitals up 2-0 in the series, and heading home for Games 3 and 4. There’s a long way to go still, as the Caps know well (they lost the first two games of their playoff-opening series against Columbus at home, but bounced back to win the next four), but they’re certainly looking impressive at this point. We’ll see where the series goes from here.