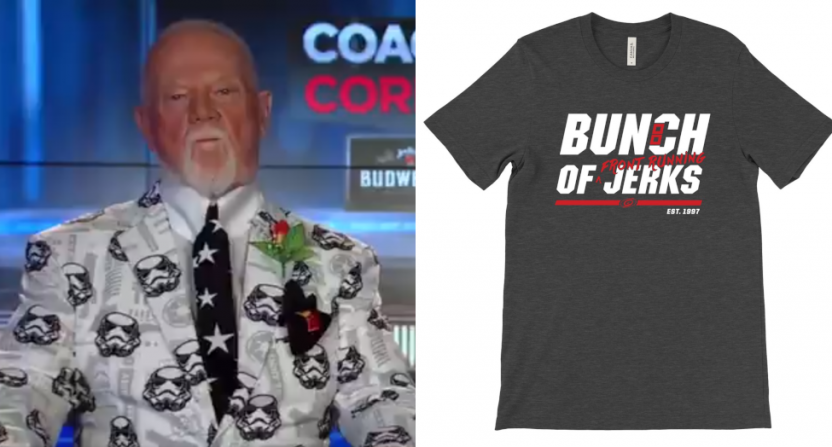 The Carolina Hurricanes’ back-and-forth with CBC/Sportsnet NHL analyst Don Cherry continues. Cherry called the Hurricanes a “bunch of jerks” in February over their celebrations, leading to them responding with t-shirts featuring that phrase that were the brainchild of tee shirt startup Breaking T. But Cherry still continued his criticisms a few weeks later, saying “players hate this stuff” (despite evidence to the contrary). Then this week, the Hurricanes put out “bunch of jerks” towels and spelled “jerks” out in their stands ahead of Game 3 of their series with the New York Islanders, and Cherry responded Saturday with a further rant not only bashing the team, but calling their fans “front-running.” And the team then shot back again Sunday night. First, though, here’s what Cherry said Saturday:

Don Cherry vs. the Hurricanes is the best rivalry of the playoffs 😂 pic.twitter.com/kC6UzbF7mx

Cherry says “I don’t understand this, I said this on Canada and it goes down in there. And you know, it’s a funny thing. They know that it’s the wrong thing to do, or they’d do it in the playoffs. You do a guy, you do it in October, you don’t see him until March. They know in the playoffs, you should—look at that there, that’s pretty good (re: the “Jerks” image in the stands). You shouldn’t have…you know, I don’t understand, guys…well, I’m told, the owner said ‘Entertain the crowd.’ And they still draw 13-14,000 people. And these people that are here now, front-running fans as far as I’m concerned, front-running fans as far as I’m concerned.”

Host Ron MacLean chimes in with “Hard not to embrace it, though, isn’t it?” and Cherry replies “I don’t embrace nothing! I said they look like a bunch of jerks being fish in the water, a bowling ball, this is professional hockey and no sport in the world does it except them, and it comes down from the top, ‘I want to entertain the fans,’ the fans there now, the 17-18,000, they’re front-runners, they’re there because they win, not because they fish, okay! That’s it!”

Here’s a video of the highlights of Cherry’s various Hurricanes rants this season:

And here’s how the Hurricanes responded Sunday with an updated shirt once again provided by BreakingT:

Every jerk is welcome to join the #Canes family.

Available soon at The Eye. pic.twitter.com/oP6X39UGU5

Well, at the least, Cherry is helping the Hurricanes sell a lot of shirts.