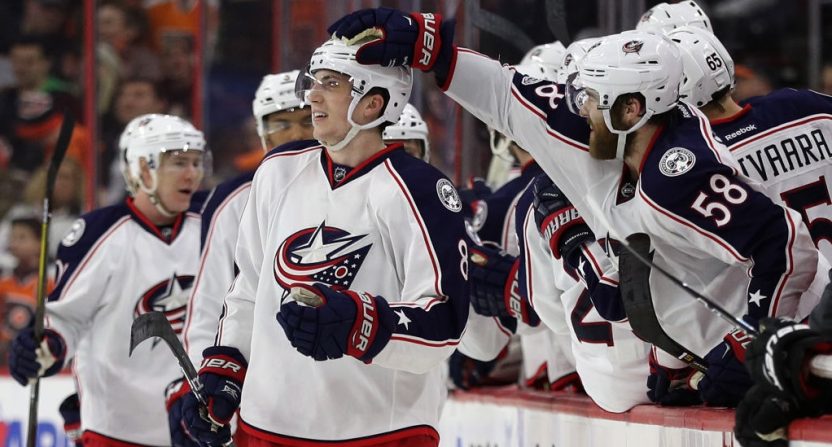 The Columbus Blue Jackets are 47-18-6. They have 100 points. With just a few weeks left in the season, they’re in the thick of the race for the NHL’s Presidents’ Trophy, awarded to the team with the best regular season record.

Step back. How insane is this? The Jackets started 0-8-0 last season and finished with 76 points. Going into this season, we thought the roster was flawed, the defense was lacking depth and the coach was half lunatic/half dinosaur, with no hope of succeeding in the modern NHL.

Yet here we are in late March and the team is vying for the Presidents’ Trophy with legitimate candidates for the Calder, Vezina and Jack Adams trophies.

Sure, the team has had a little bit of luck. This isn’t the best team in the NHL. The possession numbers are good but not great, the power play played outstandingly well for much of the season, the shooting percentage is certainly higher than it should be and Sergei Bobrovsky’s save percentage is more than 10 percent above his career average.

But is that worth paying attention to? Is that what the prevailing storyline around the team should be?

I should clarify — I’m neither a Blue Jackets fan, nor an analytics denier. But I can’t help but be annoyed by the way some analysts feel the need to discuss teams like Columbus. The war for mainstream credibility is over, even if it doesn’t always feel like it. This isn’t the 2014 Leafs or Avalanche. There is no widespread doubt that the Jackets will regress next year. I don’t need to rehash the summer of 2014. Analytics are here to stay.

So, there’s no need for the conversation surrounding the Blue Jackets to be constantly dominated by talk of how unsustainable their play is this year. Much like the Calgary Flames in 2015, there’s mainstream acceptance that this is partially luck-driven (although this Columbus team is much better than that Flames team). There is so much more to talk about – the resurgence of Bobrovsky, the incredible turnaround Tortorella has had since the embarrassing World Cup last summer, the emergence of Zach Werenski and the continued development of Seth Jones and Brandon Saad.

Not to mention that this is far and away the best team in franchise history, even considering luck. The Jackets will blow away the previous high in points by 20 or more. The team has never had more than 93 points, has reached the playoffs just twice and has a 2-8 record in the post-season. In its first 15 years of existence, the franchise has averaged just 74.4 points per season. This has been an awesome season for Columbus and it came completely out of nowhere.

I’m not saying anyone should pretend the Jackets are Cup contenders, especially once the time comes to preview their first-round series. And it’s only natural to broach the subject at some point during the season. But it shouldn’t dominate any analyst’s coverage of the team.

And, as an aside, if you do write that a team is not as good as its record shows, why would you expect any agreement from that fan base? How out of touch with sports fandom do you have to be to expect people to agree with you when you’re trashing their team during the best stretch it’s ever had?

I guess the crux of this criticism is that we no longer need to be beaten over the head with sustainability arguments. Those who care to understand probability do and those who don’t never will. When Sidney Crosby starts the season with 15 goals in 18 games (or whatever), we don’t need to be reminded that he will not, in fact, score 70 goals this season. No fan with half a brain thinks this Columbus season will lead to a 10-year run of excellence.

It’s OK to have fun sometimes. Life is unsustainable. You’ll never get that time you spent being mad online about the Blue Jackets back.