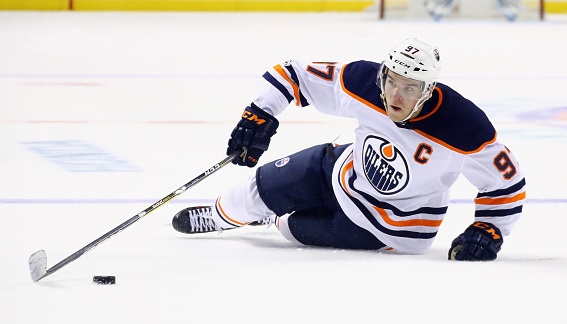 Overall excellence is about the opposite of how you’d describe Edmonton’s first 14 games to begin this season.

Even with McDavid on the ice for 22:06 per game — third among forwards behind Los Angeles’ Anze Kopitar and Florida’s Alexander Barkov, per Hockey-Reference — the Oilers are dead last in the league in goals per game and 26th in power play percentage at 14 percent. Edmonton has just 11 points (5-8-1), is seventh in the eight-team Pacific Division, 14th in the 15-team Western Conference and 29th in the now 31-team National Hockey League.

The news gets worse on special teams for the Oilers. Edmonton has drawn the fewest penalties in the league, 43 in 14 games, limiting McDavid’s ability to do damage on the power play, and has only successfully killed off 69.6 percent of its penalties, the worst mark in the league by 3.6 percentage points.

These issues are compounded by the fact that nine of these 14 games have come at home at Rogers Place. Edmonton’s six home losses are the most in the NHL and the team has been outscored 35-24 at home. Giving up nearly four goals per game at home is horrific, even with one of the best offenses in the league, but it’s far worse for a team that’s struggling to score.

Things have been different on the road. In five games away from Rogers Place, Edmonton is 2-2-1 with eight goals scored and nine allowed. How can a team play such high-scoring games at home with lax defense and at the same time play such tight, defensive games on the road?

“I can’t really comment on it,” McDavid said. “I don’t really know what the reason is.”

Oilers head coach Todd McLellan, however, thought he knew the cause of this home-road difference.

After leading the NHL with 42 wins last season, Edmonton goalie Cam Talbot has a 3.54 goals against average and a .894 save percentage at Rogers Place as opposed to a 2.03 GAA and a .937 save percentage on the road. As soon as Talbot and his teammates get more consistent at home, the Oilers should return to form.

Another reason for Edmonton’s struggles, aside from the lack of offense, has been its inability to come from behind and win close games. The Oilers were 16-19-6 when opponents scored first last year, won seven games when trailing after two periods and were 11-8 in one-goal games, according to Hockey-Reference. This season, they’re 1-6-1 when opponents score first, have no wins when trailing after two periods and are 1-3 in one-goal games.

“We need to start winning some of these tight games,” Talbot said.

On Tuesday in Brooklyn, Edmonton got a big one to begin a stretch of nine of 11 on the road, beginning with the three New York City area teams and Washington. And its top line led by McDavid and 22-year-old German wing Leon Draisaitl, and superb goaltending, got the job done.

Draisaitl opened the scoring in the second period, only to have the game tied 2:34 later by Jordan Eberle, whom Edmonton traded to the New York Islanders in the offseason. It was the only goal Talbot would allow on 37 New York shots. In the 3-on-3 overtime, McDavid and Draisaitl really shone. After McDavid thwarted a huge offensive opportunity by Islanders captain John Tavares, Draisaitl picked up the loose puck, got into open ice, and fed McDavid with a behind-the-back pass which was rifled home top shelf for a 2-1 win just 38 seconds into OT.

“Leon picked it up with eyes in the back of his head, he made a tremendous play and obviously the shot,” McLellan said. “It was a fun goal to watch.”

Nonchalantly, McDavid said “it was good to feel good again and get a win.”

Plays like that, Talbot said, is why he feels like the Oilers have an advantage during regular season overtimes with McDavid and Draisaitl on the ice. “Our two big guns took it down the ice,” he said. “That’s what we look to them for in situations like that.”

McLellan said the Oilers “did things you need to do every night. It was a big win for us. We needed it.” When asked about getting the road trip off on the right note, he said that with the record his team currently has, the right note “is winning all of them.”

Despite being last in goals scored per game at 2.3, Edmonton averaged 36.9 shots on goal per game, third in the league. Once some more of those start to go in and they get more consistent goaltending and better performance at home, McDavid and the Oilers should be back in the thick of it as one of the league’s best young, dynamic teams with a future as bright as any in the NHL.