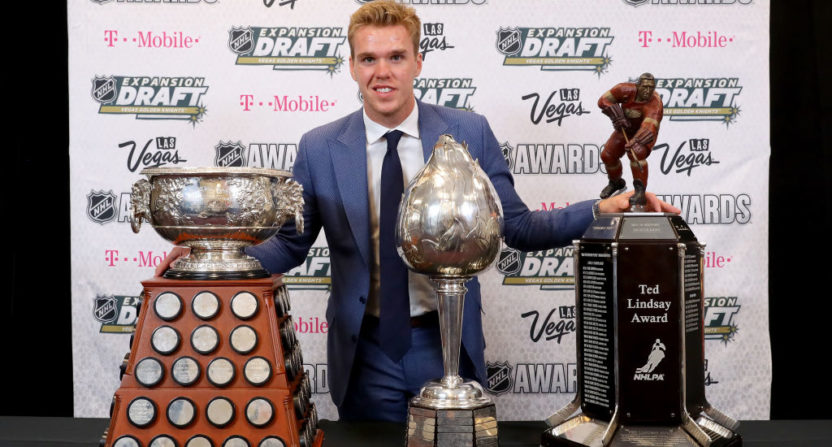 Next season, Connor McDavid will be the NHL’s highest paid player when his newly announced eight year, $100 million extension kicks in. Amazingly, it seemed that the originally reported AAV of $13.25M per season was “too high” for McDavid’s liking.

Original deal was expected to be $13.25M but hearing McDavid wasn't comfortable with the number and may have insisted on lowering it…

How Canadian of Connor. But for all of the jokes and speculation about what the number eventually did end up at, McDavid’s new contract has permanently changed the NHL’s financial landscape, and has dramatically affected all future contracts that will be handed out in the league going forward. It may also, indirectly, spin a few more wheels closer towards the league’s inevitable lockout at the start of the next decade.

Until earlier on Wednesday, the NHL’s highest paid players were Jonathan Toews, Patrick Kane, and Carey Price, whose contracts all carry an AAV of $10.5M. In the past, NHL teams found a way to lower cap hits for superstars by extending the lengths of contract to preposterous levels (see Ovechkin, Alex and Kovalchuk, Ilya as examples). But with eight years the max term a team can now offer, and the NHLPA encouraging players to get everything they can before the next inevitable lockout, the contracts that young stars will sign in the years ahead will look very similar to McDavid’s in structure, scope and most importantly cap hit.

McDavid is not the first player to sacrifice a little for his own deal to help his team stay at the top. Steven Stamkos, Sidney Crosby, and others have done the same thing by signing for less than they’re worth to ensure that their team stays competitive and not stuck in salary cap hell in the future. But with McDavid now setting the new high watermark in the NHL’s contract pool, and no guarantee other players of his ilk will do the same, what does this set up for future contract negotiations like his own?

The next big contract for a young player will likely go to McDavid’s Oiler teammate Leon Draisatl, whose sensational postseason has increased his cost dramatically. Now that he knows what his teammate is making, his potential starting price of $7M AAV seems like a major lowball in comparison. Does his value balloon to $8M per season? $8.5M? With the market being reset pretty dramatically, there is no knowing what Draisatl ends up at, let alone if a renegade GM signs Draisatl to an offer sheet.

And it’s not just Draisatl and the Oilers who face this dilemma going forward. The Toronto Maple Leafs will now watch McDavid make what he makes and realize they’re going to have to give Auston Matthews something similar this time next year. And what Draisatl ends up earning could be a benchmark for Mitch Marner too. Pretty soon, Erik Karlsson will need a new deal too, and while the two superstars play different positions, suddenly Brent Burns’ $8M AAV seems a tad low in the new marketplace. And there’s that John Tavares fellow in Brooklyn who is on the last year of his deal and he’s been criminally underpaid for being a superstar himself. How does this news go down in Garth Snow’s office?

But McDavid’s new contract doesn’t just affect the superstars. A rising tide raises all ships, and there are RFA’s not just this year but in the next few years that will all see boons at the negotiating table. Ryan Johansen, Tyler Johnson, Ondrej Palat and Alex Galchenyuk all, indirectly, picked up a little more money when this contract was announced. And with the cap not rocketing up as it did before the new CBA, these contracts are going to eat up a large chunk of a pie that isn’t growing rapidly either, making these decisions even tougher than ever. On the free market, all of these players would be worth even more than they are now no matter what the cap is, and GM’s know that. However, tying up so much of your cap space in one player can set your team back dramatically, just ask the Blackhawks.

Connor McDavid’s new contract, despite its quirkiness or the perception than he took less than he’s actually worth to help the Oilers, doesn’t obfuscate what is clear: the new deal has re-set the NHL’s contract barometers for everyone going forward. Superstars will now be paid more, and the NHL’s middle class will make more than ever before too. And with the NHLPA encouraging players to get everything they possibly can before a lockout inevitably takes away some of the gains they’ve struggled to make, McDavid’s new high water mark raises the level each and every player can now reasonably ask for, no matter what class of player you are.

The NHL’s most intriguing storyline going forward is how other players, teams and GM’s react to the new pace setting contract that has somewhat shattered an era when player’s took team friendly deals to help cap situations.

It’s time for everyone around hockey to ask the same question: what’s next in the post-McDavid contract era?