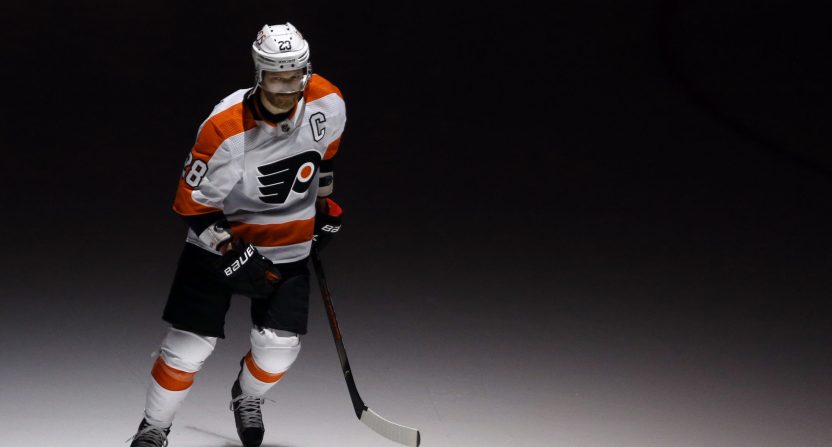 Perhaps you’ve wondered why hockey players in the NHL don’t wear long pants or perhaps it never occurred to you. Either way, there’s a good reason that the league’s official uniforms include short pants and not ones that come all the way down the leg.

Thursday, the Philadelphia Flyers showcased the long hockey pants that they wear during warmups whenever the team sports its Reverse Retro jersey this season. The orange and black Cooperalls were actually part of the team’s official uniform for the 1981-1982 and 1982-1983 NHL seasons, though they won’t be worn during games this year.

According to forward Bill Barber, the pants “made our team look bigger, look taller.”

“It was weird the first time you put them on but I liked them,” forward Paul Holmgren said, per the team. “They were warmer, which I didn’t mind. They were very comfortable. I didn’t have any problems with them.”

The early 80’s long hockey pants will be worn during warmups each time we wear our new #ReverseRetro @adidashockey jersey. A brief history of the look that lasted only two seasons: https://t.co/rsV9qzlsfF pic.twitter.com/9B2l401SR4

However, the pants came with some downsides. According to players, they restricted movement for some and even led to hamstring soreness. But perhaps the biggest issue was that the pants caused players to speed up while sliding on the ice if they fell or were knocked down.

“If you ever fell you gained speed with the nylon long pants,” Barber said. “You didn’t have any grab on the ice. You picked up speed, not slowed down.”

Holmgren said, “Not like we blocked shots like players do today, but if you went down to slide to block a shot wearing those things, you slid a lot further. You’d slide yourself right out of position. So there was some getting used to it in that regard.”

Hard-hitting sports journalism today. 😬 Since some of you asked – #Flyers can't wear the Cooperalls in games because of a league policy for safety reasons.

They were banned in 1983. Apparent safety concern: they're slippery. True story. You slide quite a ways in them. https://t.co/lK5dmTC31T

The Flyers actually did pretty well during those two seasons, the latter of which saw the Hartford Whalers join them in the Cooperalls club. However, the. NHL banned the pants and both teams went back to wearing the traditional short pants that we associate with the sport.

The more you know…