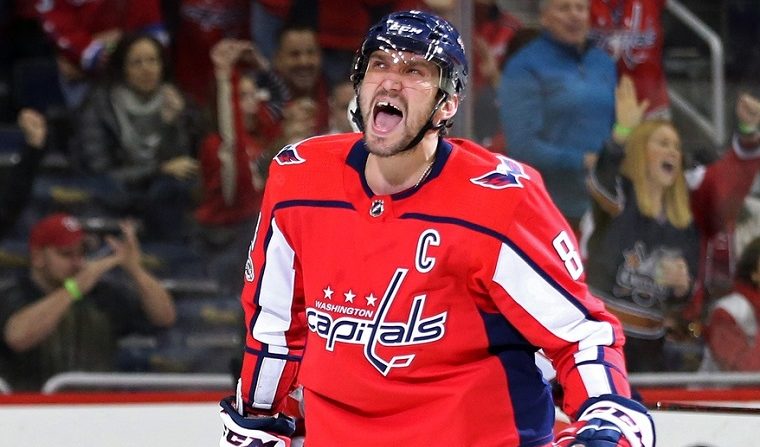 Alex Ovechkin made some waves in the hockey world when he scored his 600th career goal on March 12. It’s an incredible feat for anyone to accomplish; only 20 players in the 100-plus-year history of the NHL have accumulated that total.

But it’s even more impressive when you consider he is only 32 years old and has yet to play his 1,000th game.

Multiple arguments pop up on Twitter whenever Ovechkin hits a milestone. The first usually involves whether he is the greatest goal-scorer in NHL history. Which, yes, he probably is.

Another asserts that he would have a real chance at Wayne Gretzky’s career goal record if not for the two lockouts that occurred during his career. However, it’s been pointed out that he wouldn’t have come over from Russia regardless for the 2004-05 season, which was completely wiped out by a lockout. Plus, the 2012-13 lockout cost him only 34 games at the most. Considering his pace that year, he missed out on roughly 20 goals.

Either way, the lockouts didn’t do as much damage to his potential total as it would initially seem.

But bringing up the lockouts means we’re missing another important point: Ovechkin still has a great chance at becoming the top scorer in NHL history.

Gretzky has held the mantle of all-time leading scorer for more than two decades. He finished his career in 1999 with 894 goals, having passed previous leader Gordie Howe in 1995. Ovechkin currently sits at 602 goals, on pace to finish this season at 608. He’s already tied for 18th on the all-time goals list with former Oilers great Jari Kurri. It should be mentioned that he is slightly above his career shooting percentage this year, but it’s not that significant.

The obvious key for Ovechkin is to age gracefully. No matter how hard he works, his goal totals will dip in the upcoming years. That trend seemed to be starting last season when he scored “only” 33 goals, but he’s rebounded to lead the league with 44 so far this year.

Ovechkin will be 33 when next season begins, which is an interesting age. Looking at the very short list of guys who have scored 700 or more goals, 33 is often the last great scoring season. That doesn’t mean players completely fall off after that age, but they are certainly less productive.

Gretzky, for all his late-career play-making dominance, was not much of a scorer in his final seasons. He never put in more than 25 goals after the age of 33. Jaromir Jagr scored 54 in his age-33 season, but never went above 30 again. Brett Hull stopped putting up monster seasons around the same age. Marcell Dionne went from 46 goals at age 33 to 36 the next year, to 28 after that and was retired by age 37. Mike Gartner had 45 goals that season, but never passed 35 again. Phil Esposito had 61 at age 32 and never got above 42 again.

This is all to say, if Ovechkin has another vintage season in him, it is very likely the last one he’ll ever have. If he continues on the pace he’s on this year, and we can pencil him in for 45 next year, he’d be up to 653.

Then he’d more than likely be entering his twilight years, which was not nearly a death sentence for his contemporaries. While many of them slowed down, they were able to put up solid performances and add to their totals. Gordie Howe paid no mind to that age-33 trend and scored 300 more goals (including the third-best season of his career) after that season, famously playing into his early 50s.

But Howe’s absurd longevity wasn’t the only example. Jagr scored nearly 200 goals after 33, despite playing three seasons in the KHL. Hull passed the 200 threshold after that age. Gartner had seasons of 34, 35 and 32 goals. Esposito averaged 36.6 goals per season from 33-37.

Ovechkin’s contract is up in 2021, but he’ll easily get another deal either by the Caps before then or on the open market. Either way, he could easily find work in the years that follow. If he were to average just 30 goals per season between the ages of 34-40 (seven years), he would sit at 863 (after our guess for the rest of this year and next season).

Sure, almost no one in league history is good after 40. But would it really be that unlikely for Ovechkin to stick around for two or so years to add an extra 30 to his total and break a record that might otherwise be untouchable in the long term?

Of course, this is all reliant on him staying healthy. And while past health is no guarantee of anything in the future, Ovechkin has a good track record. He has missed just 29 games in his 13-year career, not all of which were due to injury. He’s proven to be durable thus far. On top of that, he’s kept his focus totally on scoring, unlike Gretzky and contemporary Sidney Crosby, who both have focused more on play-making.

There’s also a myriad of things that could go wrong. He could retire, an injury could prove too great to overcome, he could be arrested, he could face a long suspension, the league could make another low-scoring turn. It’s always easier for things to go wrong than go right.

But more than anyone in the past two decades or the decade to come, Ovechkin has a chance to finish as the NHL’s all-time leading scorer.