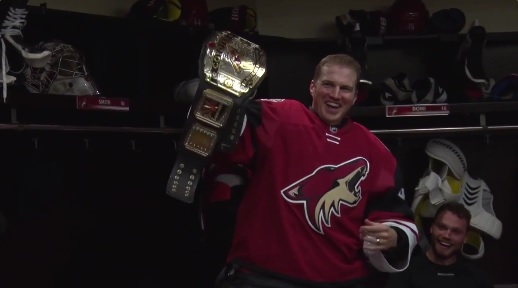 The Arizona Coyotes needed a goalie to back up starter Louis Domingue on Monday night after backup Anders Lindback got hurt before the game, and because Lindback was injured so close to gametime, they had to turn to someone who was home giving his five-week-old twin boys a bath.

Nathan Schoenfeld made the most of the sudden call-up to the Coyotes, sitting on the bench to watch Domingue and his new teammates capture a 6-2 win against the Montreal Canadiens. To make this story even more remarkable, Schoenfeld had off on Monday from his regular job as a bank relations manager for Presidents Day.

Here’s what he had to say after the game, via NHL.com.

“I got a text from my father-in-law saying, ‘[Coyotes backup goaltender Anders Lindback] might be hurt, pack your bag,'” Schoenfeld said. “I told my wife, ‘I have to go, I’m going to play.’ She said, ‘You’re leaving me now, with the twins?’ And I said, ‘I’ll call your mom, she can come and help.’ I got here a half-hour before the game, just in time to get dressed and sit on the bench and enjoy the win.”

Nathan Schoenfeld got the call to be the @ArizonaCoyotes emergency backup goalie while bathing his twin boys!https://t.co/QBS5jPdOW0

Schoenfeld, a former Arizona State club team goaltender is the emergency goalie listed by the Coyotes who may dress and play for the team in the event either of the team’s top two goalies normally listed are unable to play.

This was the case for Arizona with Lindback suffering a lower-body injury during an off-ice activity prior to warmups on Monday. Starting goalie Domingue was healthy, but Schoenfeld didn’t mind soaking up all the action from the bench.

After the game, Schoenfeld was understandably thrilled, as he told Sarah McLellan of the Arizona Republic.

“I was just going to keep my jersey on and stay here as long as I could,” he said. “But I think eventually I’ll have to go home.”

Rule 5.3 explains how Nathan Schoenfeld would be permitted to play should he be needed as ARI's emergency 3rd goalie pic.twitter.com/FOwlAaiDkz

After the game, Schoenfeld was handed the coveted MVP belt by Coyotes captain Shane Doan after coming through in the clutch for the team.

And just think, he wasn’t even supposed to be there yesterday.