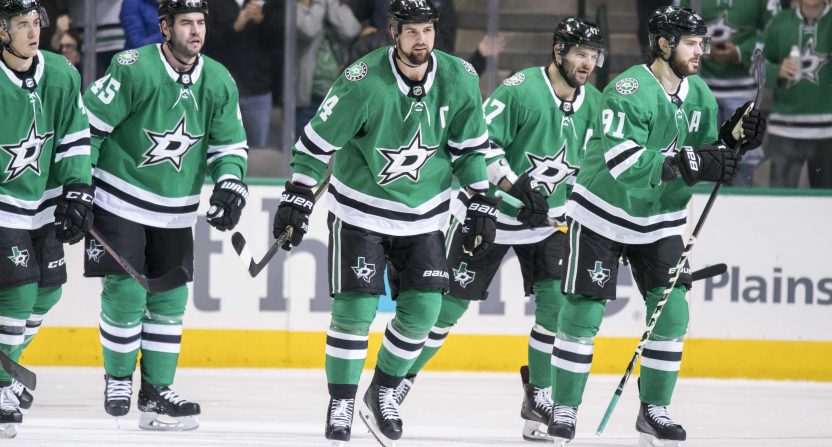 To be fair, at least you know where you stand with Dallas Stars CEO Jim Lites.

Heading into the 2018-2019 season, the Stars were counting on Tyler Seguin and Jamie Benn to improve their standing in the Western Conference where they missed out on the playoffs but a few points the year before. So far, they’ve done reasonably well and the Stars currently find themselves eighth overall in the conference, which would be good enough to make the playoffs right now (though it’s still early). Plus, the Stars are only nine points back of the Winnipeg Jets up in first place, so it’s really not that shabby.

Benn, who carries with him a $13 million/year contract, has performed okay, leading the team in scoring with 15 goals as well as 15 assists. Meanwhile, Seguin, who signed a $78.8 million extension with the squad, is second overall in scoring with 11 goals to go with his 21 assists.

At 19-16-3, the Stars certainly aren’t world-beaters, but they’re at least moving in the right direction. But don’t tell that to Lites, who apparently expected the Stars to be the dominant team in the NHL this year. And when asked about his two high-profile players, he did not mince words.

“They are fucking horseshit, I don’t know how else to put it,” Lites told reporters Friday after a 2-0 win, according to The Athletic. “The team was OK. But Seguin and Benn were terrible.”

“We’ve had meeting after meeting after meeting,” Lites continued. “The accountability on the ice [from Benn and Seguin] is not there. These guys were signed to big contracts because they were the third- and sixth-leading scorers in the National Hockey League over the past five years. They get their money, we expect them to not be outplayed every game we play in. And if they were as good as they’ve been in the past we wouldn’t be having this conversation.”

On one hand, Lites is the guy who signs those checks, so it’s understandable that he has a certain expectation because of them. On the other hand, man, we sure hope Seguin and Been appreciate negative feedback as a motivating tool because otherwise, this could get ugly really quick.

For their part, both players have said they expect more from themselves in the season ahead. If this team wants to get to the next level, that starts with myself,” said Benn. Meanwhile, Seguin told reporters, “I’ve got to play better. I’m trying to do a job, and I haven’t had the right results.”

Given how the Stars are in okay position as it is, one wonders just how much better they could be if Benn and Seguin reach this next level everyone in the organization seems to think they can hit. For their sake, we hope they turn it up a notch. Otherwise, who knows what kind of words Lites will have for them and the team.