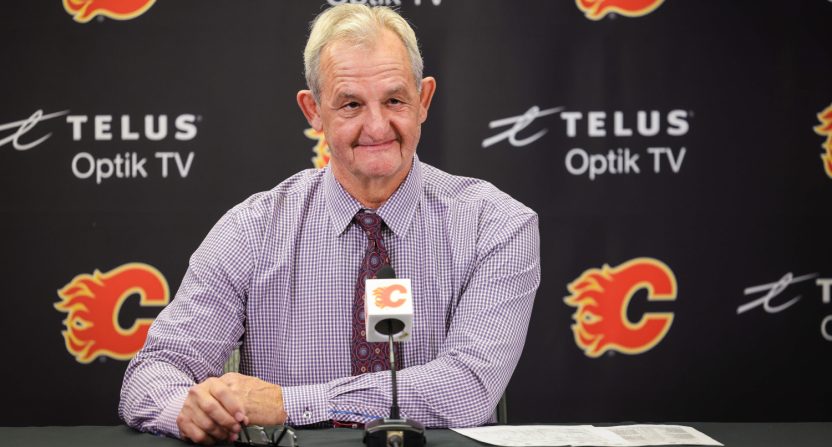 When a player leaves the bench during a hockey game to go to the locker room, it’s often for medical attention of some sort. But often is not always. Following the Calgary Flames‘ 3-2 loss to the Edmonton Oilers in NHL action Saturday night, Flames’ coach Darryl Sutter (seen above after an Oct. 13 game) was asked about forward Jonathan Huberdeau‘s trip to the locker room at one point during the game. And Sutter provided a scatological explanation:

We must protect Darryl Sutter at all costs. 💩pic.twitter.com/7At4xo9p36

“Huberdeau left the bench for a little while in the first period. Are you able to say what it was?” “I think he had to go take a s**t.”

This is not the first time there’s been discussion of a NHL player’s in-game, uh, relief. One famous case came with Vancouver Canucks’ goaltender Roberto Luongo in the 2007 Stanley Cup playoffs, where backup Dany Sabourin had to start the overtime period of an elimination game while Luongo was, uh, occupied. Luongo spoke to Sports Illustrated‘s Alex Prewitt on that in 2016 (as part of a wider feature on goalies and bathroom breaks), and had some great quotes:

“I don’t know what happened. Something just came over me. Sometimes it just goes away, right? And your mind gets off it. But this time it wasn’t going away. Thank God they didn’t score (while I was in the bathroom), because our season would’ve been over. That might be a better story, but I don’t think it would’ve been fun, though.”

Fortunately, it’ s a little easier for skaters like Huberdeau to exit the ice for a bathroom trip. But if their absence gets noticed, it’s reasonable for media to ask about it in case it might pertain to an injury.  That wasn’t the case this time, but it’s still good for most people that the question was asked, as it led to this hilarious response from Sutter. It may be a little embarrassing for Huberdeau, though.