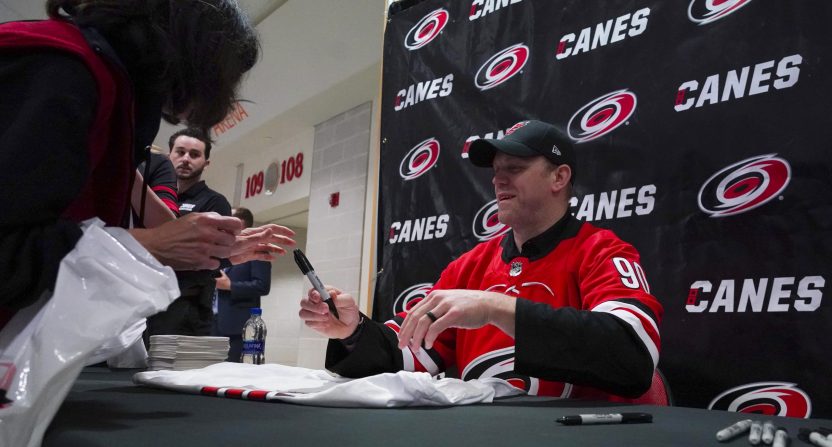 Unless you’ve been able to completely tune out sports over the past week, you’re well aware that a 42-year-old Zamboni driver made NHL history by serving as the emergency backup goalie for the Carolina Hurricanes and picking up a win over the Toronto Maple Leafs. The story transcended the sport of hockey and was covered far and wide, with David Ayres making appearances on countless talk shows and news outlets. The publicity has been enormous.

It sounds like something the NHL should be enjoying, right? Apparently not.

The league is already discussing ways to prevent a similar situation from happening again in the future. Sportsnet’s Brian Burke called the situation “embarrassing for the NHL” due to the fact there may have been better emergency backup goalie options available in the area.

Let’s first make something perfectly clear. The only thing that was embarrassing was the Maple Leafs’ skaters failing to put more pucks on the emergency backup. Maybe Toronto should be asking if there were better forwards in the area?

As embarrassing as the loss for Toronto was, credit still needs to be given to the Hurricanes and their masterful job of shutting down opportunities. Nothing about this was embarrassing for the league as a whole, as much as the Toronto faithful would want you to believe.

NHL Deputy Commissioner Bill Daly spoke about the Ayres story and said that though the issue is extremely rare (it has only happened twice since 1965-66), it’s one the league will investigate (via NHL.com):

“There’s no easy fixes to it. Particularly, we have to work with the [NHL] Players’ Association. Who’s a player? Who’s not a player? What qualifies all of that? But obviously we want what’s best for the game, and we want to make sure people aren’t putting themselves in danger by playing goal in a National Hockey League game. … So that’s obviously something we have to continue to work through.”

The NHL is making a mountain out of a molehill. While Ayres isn’t an NHL player, it’s not like he was some bum off the street either. He has participated in practices and is no stranger to the Maple Leafs. He has faced the same forwards on multiple occasions, and even practiced with them the day after his shocking victory. The current emergency backup goalie rule isn’t as shoddy as some are making it out to be. They may be no-names to NHL fans, but they’re not completely new to the sport of hockey.

The league needs to remember two key things here. First, these are emergency situations. By definition, an emergency is an “unforeseen combination of circumstances.” These don’t happen often and don’t require critical thinking to try and solve. The game basically turned into a free pass for the Hurricanes to lose after they suffered injuries to both goaltenders. Ayres shocking the world created a wave of positive publicity that would have never originated from a traditional Maple Leafs – Hurricanes regular season contest. Had he struggled, no one would have faulted him or the team for dropping two points. This became a no-lose situation for the team that had to call on Ayres. We’re only still discussing this because the Maple Leafs got egg on their face.

Second, this is one of hockey’s unique quirks that fans and non-fans love. What other sport presents the opportunity for a nobody (no offense) to come out of the stands, put on a jersey and go into a game? None. There’s nothing quite like it. The closest comparison we can draw is a position player pitching in an MLB game. Even that isn’t too comparable as it happens a handful of times each season and position players are all well known by the fans. Even if Ayres came in and only made one save, his story would still be the stuff of legend.

Could the NHL try to ensure the backups are younger players with a bit more skill? Sure, but it seems like a giant waste of time and resources. Some ideas floated around included a third goalie on the depth chart or someone who could travel with the team. That seems like a costly decision to make for a situation that almost never happens.

The NHL would be wise to stay out of its own way and embrace the Ayres story for what it was. Let this be that once in 50,000 games scenario that becomes must-see TV when it happens. Instead, spend the time and effort on the topics that really matter and consistently pop up in NHL games.