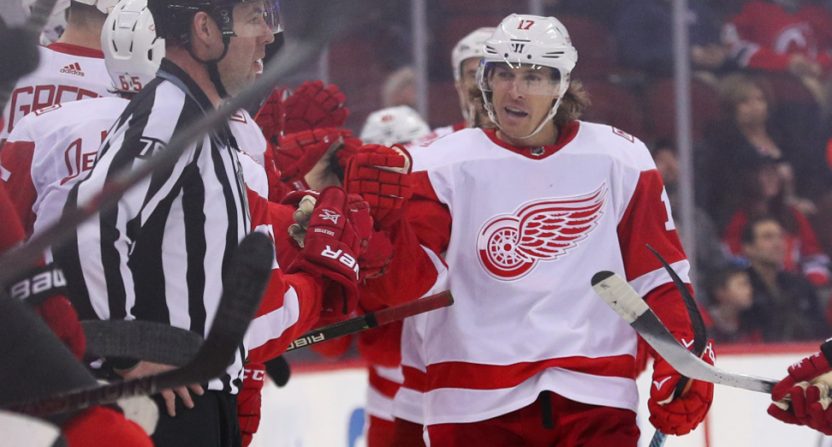 Pro hockey player David Booth spent last season with the Detroit Red Wings after a couple of seasons in the KHL, but the 11-year vet is currently a free agent. Despite a long NHL career that spanned four franchises, Booth is probably more well-known to the general public for a YouTube video he posted in 2012 that showed him baiting and killing an American black bear. While the practice was legal in Alberta where it occurred, it was and still is banned in British Columbia and 18 U.S. states. The controversy caused Booth to remove the video a few days later. Since then, you might remember him as the husband of former beauty queen Ashley (Durham) Booth, who was featured on the second season of the Canadian reality series Hockey Wives. The couple was also named in a suit involving an exploding BBQ at a rental property of theirs in 2017.

All of which is to say that when Booth does pop up on your radar, it often isn’t for great reasons. That is very much the case this time as Booth decided to weigh in on Nike’s new ad campaign involving fellow free agent pro athlete Colin Kaepernick.

Believe in something, even if it means sacrificing everything. #JustDoIt pic.twitter.com/SRWkMIDdaO

The campaign boasts the slogan “Believe in something, even if it means sacrificing everything.” Many critics have taken to using a semantic argument to say that Kaepernick hasn’t truly sacrificed, at least compared to those who lost their lives or have no money. Booth, however, went a different semantic route on Twitter Wednesday evening, saying that the literal phrase doesn’t make any sense.

“Believe in something even if it means sacrificing everything” does this mean you can fly a plane into a building? How can so many people @Nike be this ignorant as to the logical fallacy this entails. This is absolute absurd. I really don’t understand. Why would u support this?

Obviously, Nike’s ad campaign is meant to exist within the context of sports, and not as a literal piece of text applied to any situation. No one ever looked at “Just Do It” and thought it was a terrible slogan because it implied giving free reign to everyone to do whatever they want. And as such, plenty of people had a field day dunking on the nature of this complaint.

I just kind of want David Booth to read through company slogans just to see him take it the extreme as he attempts to make a point.

"Mcdonald's 'I'm Lovin' It?" So what, we're supposed to love it if we get hit by a car? Or we supposed to make love to, what, watermelons?"

McDonalds: “I'm Lovin' It”
David Booth: "What is it you love? MURDER?"

"Finger Lickin' Good? So if I fall in poop your chicken is still gonna taste good? And Taste the Rainbow? HOW CAN I TASTE A RAINBOW, JEFF, IT'S ALWAYS JUST OUT OF REACH." – David Booth yelling at his scarecrow tomorrow

Just so we're all clear. Red Bull does not, in fact, actually give you literal wings with which you can fly. Wouldn't want anyone jumping off a cliff or anything thinking that the slogan was intended to be literal. Good night.

Despite the fact that quite a few people responded to Booth with reasoning, questions, and articulated responses, he ignored those and tried to get out of the mess above it all.

The only responses to my last tweet were just name calling and bullying. The weaker the point the louder you have to shout. Not one person tried to reason against it. I am trying to understand the reasoning behind this slogan. What did CK sacrifice? Money? Is that everything?

Obviously, Booth is being pedantic but some of his responses also veer into territory that really had nothing to do with the initial point, which of course reveals the bigger issues at play in Booth’s mind (though someone should remind him that hockey is for everyone).

It’s like telling your son they can become a girl even if there a boy. It’s that messed up

And he also capped off his evening with a reference to a different kind of slogan that you were probably expecting.

Good night everyone. Thanks for the kind tweets. Let’s keep America great. #MAGA

MAGA, which stands for Make America Great Again, is a slogan that’s open to wide interpretation and implies that America is currently a terrible place to live and there is only one solution to returning it to some former place of glory. Strange that someone would want to associate themselves with that kind of logical fallacy…