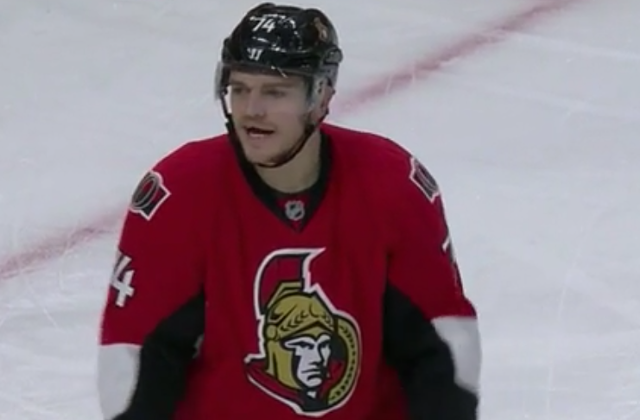 Ottawa Senators’ defenseman Mark Borowiecki was taking a normal shift Saturday against the New Jersey Devils when something highly unusual happened: one of his skate blades failed on him and came off.

What followed was pretty ugly for Borowiecki:

It looks like Borowiecki’s injured, but he’s not. He’s struggling massively to keep up on the shift in the defensive zone, as he can’t get to the Sens bench to change his skate, but can’t really help his team out much either. No matter how much he tried, he couldn’t get up on two feet, and eventually the play gets blown dead, much to the amusement of his team and the commentators. Borowiecki himself wasn’t too amused afterwards, though:

“When that happens you can’t stand up. It’s impossible,”

“(Official) Timmy Peel was so disgusted with me on that shift, he finally blew it down.

“(After the play) I was just in a bad mood,” he said, ignoring the fact that his teammates were enjoying a laugh at his expense. “I wasn’t really paying attention to anyone. I can laugh about it now. It’s just one of those flukey things that happens in sports. You can ask any guy who’s lost steel on the ice. It’s really hard to skate. It’s really hard to do anything. So I stood on one leg for as long as I could and I got really tired and the instant that plastic touches the ice, you’re going down.

“I’m pretty sure I have two bruised hip bones right now from falling so much,” he said. The ice in Ottawa can be pretty sturdy this time of year.

And it wasn’t just that skate blade that failed him Saturday. He had multiple skate malfunctions.

“It’s a bit of a tough situation because I’d actually already broken another pair of skates tonight so my backup skates were out of commission too,” Borowiecki said. “I broke two holders tonight and Bobby (Ryan) hit me with a shot and blew my tendon guard off my other skate.”

The good news for Borowiecki and the Sens is that they beat New Jersey 3-1, but not before everyone had a little laugh at his expense.