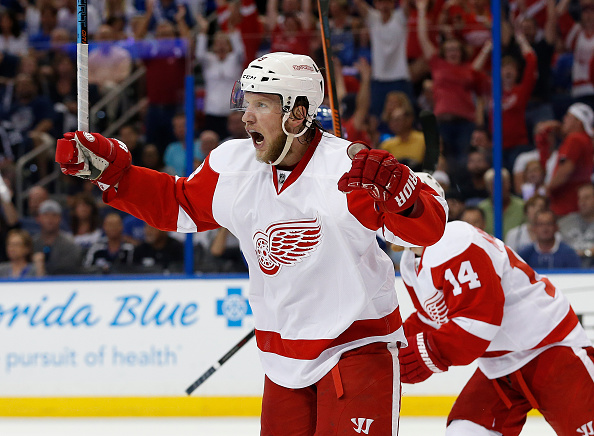 When the Detroit Red Wings fell, they fell hard. After 25 consecutive years in the playoffs, Detroit missed the playoffs by 14 points last season. The team finished 14th in the Eastern Conference with 79 points. They had a negative-37 goal differential. This was despite the fact the team went 9-0 in shootouts.

The Red Wings struggled in nearly every facet of the game. They were out-possessed at even strength, were bad on the power-play and were mediocre on the penalty kill. Petr Mrazek was bad in net for the entire year.

But the past is the past, and a new season is almost here. Unfortunately for Detroit, things are unlikely to be much more fun this season. In fact, the Red Wings, save for Vancouver, might be in worse shape than any franchise in the league. This could be the start of a new streak – of playoff misses.

Let’s start here: the Red Wings will be bad this year. They’ll mostly be the same team as last season with a few exceptions. They signed Trevor Daley, who is good, but not great and who is also getting older. Andreas Athanasiou, a restricted free agent, has not been signed yet, despite being second on the team with 18 goals last season.

It’s hard to see the team competing. There’s always the possibility that Mrazek could bounce back or that Dylan Larkin could make the leap into stardom. But how much of a difference would either of those things make? It’s hard to see this team finishing within 10 points of a playoff spot.

Looking beyond this year, things could get ugly. Pavel Datsyuk is gone. Henrik Zetterberg may be too, and he’s moving into his late-30’s regardless. There’s little offensive firepower beyond him. The second-leading scorer on last year’s team was Gustav Nyquist, who had just 48 points. This team, eight years removed from its last Stanley Cup Final appearance, now has been pushed into rebuild mode.

The contracts are a damn nightmare. It’s hard to even know where to begin. I could start by saying that their projected cap hit is the second-highest in the league, despite the team having almost no chance to compete.

Zetterberg will make more than $6 million per year through 2021 when he turns 41. Tomas Tatar will make $5.3 million through that same time frame, despite being just kind of OK. Frans Nielsen is under contract until he’s 37, making $5.25 million. Luke Glendeing is inexplicably signed for four more seasons, albeit at a hit of less than $2 million per year. And then there’s Justin Abdelkader, who will make $4.25 million through 2023. That’s the same guy who has reached the impressive peak of 40 points just twice in his career.

And that was just the forwards. The defensive corps is made up of Mike Green (one year, $6 million left on his contract), Danny DeKeyser (five years, $5 million AAV), Niklas Kronwell (two years, $4.25 AAV), Jonathan Ericsson (three years, $4.25 million) and Trevor Daley (three years, $3.166 million). The team will also spend $9.3 million on its two primary goaltenders this season.

To recap: they’ll owe seven players, none of whom project to still be all that good by this point, more than $33 million in 2020-21.

So, what you have is a franchise, desperately in need of rebuilding, totally unwilling to rebuild. General Manager Ken Holland said so himself. Holland likely still has a lot of rope, considering the considerable success the team has had during his 20-plus year reign. That likely means Holland will have time to start to clean up his mess, but it’s not clear whether he’s capable doing that.

All the lopsided trades and bad signings the Wings have made over the course of the past couple years weren’t an accident. They reveal both Holland’s incompetence as a GM and his lack of ability to adapt to the modern game. Also, Mike Babcock is gone and Jeff Blashill is not Babcock.

There are some positives. The team has some nice prospects and it will have some nice early draft picks coming soon. But there’s no worse place to be than where Detroit is – a bad team with no intention of rebuilding and enough cap pressure to make it difficult to make any major moves.

It’s not even clear whether the young guys on this year’s team are even capable of making up a solid top-six. This could get ugly.

In some ways, this is the price being paid for decades of “going for it” over and over again. But, hey, there are always YouTube clips of the 2008 Stanley Cup. There’s no shortage of recent history to appreciate while the franchise embarks on a new streak.