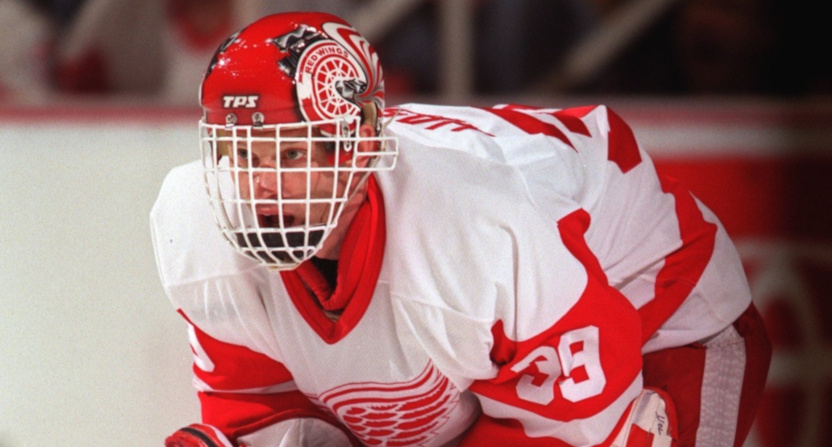 Dominic Hasek is widely regarded as one of the best goalies in NHL history. While he mostly played for the Buffalo Sabres, he eventually won two Stanley Cups with the Detroit Red Wings.

The hockey superstar grew up in the Czech Republic at a time when it was part of the U.S.S.R., as it remained until 1989. Now, as a sports icon as well as a budding politician, Hasek is stepping up his public opposition to Russia and its ongoing invasion of Ukraine.

A hockey legend, with a potential political career, says the NHL should ban Russian players over the war in Ukraine. “The participation of Russian ice hockey players in the NHL is a billion-dollar advertisement for the Russian state."https://t.co/ifhmNfEuTH

“We know that if we don’t stop the Russians in Ukraine,” Hasek told The Athletic, “then we will be one of the next in line, and the tens of thousands of dead and mass graves will be on our territory.

“Russia must be defeated and forced back into its territory. There is no other way to peace. Believe that.”

As part of that pushback on Russia’s foreign policy, Hasek believes the NHL should ban Russian athletes from participating in the league because it acts as a benefit to the country.

“It should be remembered,” Hasek said, “that the participation of Russian ice hockey players in the NHL is a billion-dollar advertisement for the Russian state and its actions.

“Perhaps some cannot imagine how their participation and achievements among us help the moral self-confidence of their nation, increase the morale of the nation, including the work morale, and this also applies to their army. And, of course, it strengthens all the pro-Russian forces in the world.

“I think that the value of all Russian athletes who compete with us is in tennis or hockey, etcetera, is worth many hundreds of billions of dollars annually to Russia and its imperialist war. And we give it to them for free, unfortunately.”

Hasek even went as far as to call for the leaders of the NHL to resign and noted that if he were to become the president of the Czech Republic, he wouldn’t allow the NHL to play games there with Russian players.

“Gary Bettman and Bill Daly must resign from the NHL,” Hasek said. “The way they behaved towards our country and the fact that they did not respect the position of our ministry on our sovereign territory is inexcusable.

“If they continue to lead the NHL, which is likely in the near future, I do not want the NHL to come to our territory. I will act accordingly. If the next management apologizes for their attitude, I will be pleased and very happy to welcome the NHL to the Czech Republic again.”

Hasek also doubled down on his comments about Washington Capitals star and Vladimir Putin supporter Alex Ovechkin, whom he called “chickens***” and “liar” over his remarks about the invasion.

“I called him chickens*** because I was very upset with what he said,” Hasek said. “He said politics is not connected to sports, and he doesn’t know about war. Of course, there is a lot he can do.”

The NHL has not responded to Hasek’s assertions and it’s unlikely that they would do that, but the ongoing conflict and Russia’s role in the world will continue to cause ripples across the sports world with many asking for action to be taken.