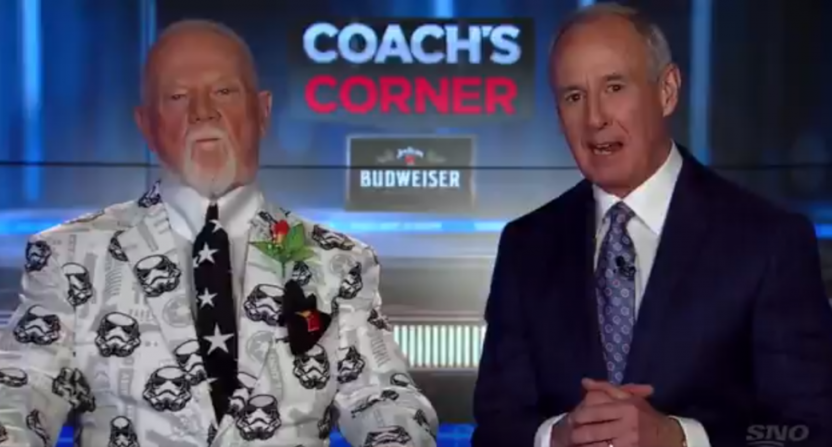 The criticisms that CBC/Sportsnet hockey “analyst” Don Cherry has ladled out against the Carolina Hurricanes this season are absolutely ludicrous. That’s about what you’d expect from an 85-year-old man whose whole act is “look at me, look at me,” spanning ridiculous suits and ridiculous takes. Cherry went in hard on the Hurricanes’ celebrations this year, calling them a “bunch of jerks” in February and then launching a later counterfactual “players hate this stuff” rant in March, and the team responded with “Bunch of Jerks” t-shirts in February, plus towels and seat designs with that message ahead of their Game 3 win over the New York Islanders Wednesday. (They also won Friday, advancing to the Eastern Conference Finals as a result.)

On “Coach’s Corner” Saturday, Cherry went in on the Hurricanes yet again while wearing a suit festooned with images of Imperial stormtroopers (for May the Fourth, naturally), demonstrating the traditional accuracy of those units along the way:

Don Cherry vs. the Hurricanes is the best rivalry of the playoffs 😂 pic.twitter.com/kC6UzbF7mx

“I don’t understand this, I said this on Canada and it goes down in there. And you know, it’s a funny thing. They know that it’s the wrong thing to do, or they’d do it in the playoffs. You do a guy, you do it in October, you don’t see him until March. They know in the playoffs, you should—look at that there, that’s pretty good (re: the “Jerks” image in the stands). You shouldn’t have…you know, I don’t understand, guys…well, I’m told, the owner said ‘Entertain the crowd.’ And they still draw 13-14,000 people. And these people that are here now, front-running fans as far as I’m concerned, front-running fans as far as I’m concerned.”

Host Ron MacLean chimes in with “Hard not to embrace it, though, isn’t it?” and Cherry replies “I don’t embrace nothing! I said they look like a bunch of jerks being fish in the water, a bowling ball, this is professional hockey and no sport in the world does it except them, and it comes down from the top, ‘I want to entertain the fans,’ the fans there now, the 17-18,000, they’re front-runners, they’re there because they win, not because they fish, okay! That’s it!”

As Sara Civian of The Athletic noted, many of Cherry’s comments aren’t accurate at all. First, Carolina averaged 14,322 fans during this regular season; yes, that’s not great (fourth-worst in the league), but it’s better than the “13,000-14,000” Cherry claimed. And that attendance was 13,841 on average in January, an improvement on last year’s 13,320 and a big jump on the last-in-the-league 11,776 in 2016-17 (Peter Karmanos’ last as owner before selling to Tom Dundon midway through 2017-18), and it’s only grown since then. And, as per Hockey Reference, the Hurricanes have averaged 19,092 fans through five home games in these playoffs,  102 percent of their capacity, so that’s well above the “17-18,000” Cherry claims. (Oh, and that’s before getting to “no sport in the world does it except them; has Cherry really not seen any of the celebration controversies in football or baseball?)

But really, the Hurricanes’ own team account summed up the validity of Cherry’s comments pretty well:

We just can't stay out of the headlines lately pic.twitter.com/CQW0K7Srbb

This is just more proof of how silly it is for CBC and Sportsnet to still have Cherry as their highest-profile analyst. Nothing like having an analyst continue to pick fights with an entire fanbase while not actually offering any insight. But hey, at least the Hurricanes are getting some good mileage out of this.

[You can buy an official Bunch Of Jerks t-shirt here.]